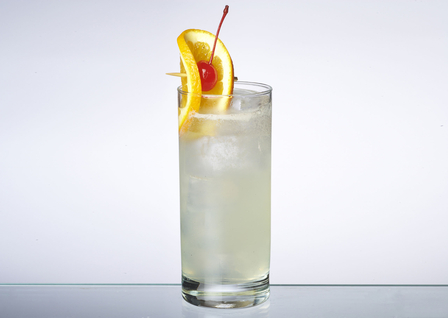 A Collins is basically a sour cocktail made using a base spirit (usually gin), lemon juice, sugar and carbonated water, served long over ice in the glass named after it. Collins glasses are tall and round and usually have a capacity of 12 to 16 ounces to their brim.

In his 1948 The Fine Art of Mixing Drinks David A. Embury aptly describes the Collins as being "a lemonade made with charged water and spiked with gin or some other liquor." He goes on to say, "Originally there were two brothers only in the Collins family - Tom and John. During recent years, however, numerous cousins have appeared on the scene - Pedro, Pierre, Sandy, Mike, Jack, the Colonel and several others whose first names have not yet been officially recorded in the baptismal registry."

Embury explains the confusion/difference between a Tom and John Collins, "The original Collinses were always made with gin but, strangely enough, never with London dry gin - the very liquor that is practically always used in making a Collins today. The Tom Collins was made with Old Tom gin and the John Collins with Holland gin [jenever]."

"The adoption of London dry gin as a Collins base gave rise to two schools of nomenclature. With one school it was simply substituted for Old Tom gin in the Tom Collins. The other school, however, preferred to retain the Tom Collins name for the original drink made with Old Tom gin and, since Holland gin was practically never used any more in a Collins, they transferred the John Collins to the Collins made with London dry gin. This accounts for the confusion that exists in present-day books of recipes. In some the Tom recipe calls for Old Tom gin and the John recipe for dry gin, in others the Tom recipe calls for dry gin and the John recipe for Holland gin. Actually, of course, Old Tom gin is merely a sweetened London gin. Consequently, we can make our Tom Collins with either Old Tom or London dry gin, but, if Old Tom gin is used the quantity of sugar should be reduced by about a half."

The creation of the Collins is credited to John Collins, a bartender who worked at Limmer's Hotel, Conduit Street, London. The 'coffee house' of Limmer's Hotel was a true dive bar, popular with sporting types during the 19th century, and famous, according to the 1860s memoirs of a Captain Gronow (a Victorian writer of four observational tomes) for its Gin Punch as early as 1814.

It would appear that the Collins morphed from the Gin Punch, a very popular drink of the day. Whether or not John (or possibly Jim) Collins, head waiter of Limmer's was responsible for first creating/naming the Tom Collins will never be known but he is immortalised in a limerick written by Frank and Charles Sheridan about John Collins:

My name is John Collins, headwaiter at Limmer's,
Corner of Conduit Street, Hanover Square,
My chief occupation is filling brimmers
For all the young gentlemen frequenters there.
Mr. Frank always drinks my gin punch when he smokes.

It could be that the special gin-punch for which John Collins of Limmer's was famous went on to become known as the Tom Collins when it was made using Old Tom gin.

An alternative story attributes the drink's creation to a Mr Collins who started work at a New York tavern called the Whitehouse in 1873 and made thirst quenching gin drinks. Another story identifies a different Tom Collins, who worked as a bartender in New Jersey and New York City. There are apparently also versions attributing its creation to San Francisco and Australia, and it is not impossible that the drink evolved in two or more places independently.

Others say that the Tom Collins originated in New York and takes its name from the Great Tom Collins Hoax which took the city by storm in 1874. This practical joke involved telling a friend that a man named Tom Collins had been insulting them, and that he could be found in a bar some distance away. It has been said and written on the likes of Wikipedia that "A recipe for it [John Collins] appears in the Steward and Barkeeper's Manual of 1869" so proving the 'Hoax' to be exactly that. However, having searched the said 1689 manual I can't find any mention of a Collins. Perhaps this claim is also a hoax?

Although there is little hard evidence it appears that the Collins was an adaptation of the long popular Gin Punch and that it could well have been created by John Collins at Limmer's. The original Collins was probably based on jenever, then old tom gin and finally London dry gin as fashion changed the style of gin available in London and New York. Each juniper spirit produces a differently styled Collins - all good, though my own preference is for an oude genever.

Harry Johnson's 1882 Bartenders' Manual includes recipes for both a John Collins based on Holland Gin (genever) and a Tom Collins with old tom gin.

John Collins
(Use an extra large bar glass)
3/4 tablespoonful of sugar;
2 or 3 dashes of lemon juice;
2 dashes of lime juice;
4 or 5 small lumps of ice;
1 wine glass full of Holland gin;
Pour in a bottle of plain soda, mix up well, remove the ice and serve.
Care must be taken not to let the foam of the soda water run over the glass while pouring it in. This drink must be taken as soon as mixed or it will lose its flavour.

Tom Collins
(Use an extra large bar glass)
3/4 tablespoonful of sugar;
3 or 4 dashes of lime or lemon juice;
3 or 4 pieces of broken ice;
1 wine glass of Old Tom gin (genuine only);
1 bottle of plain soda water.
Mix well with a spoon, remove the ice, and serve.
Attention must be paid not to let the foam of the soda water spread over the glass; this drink must be drank as soon as mixed in order not to let it get stale and lose its flavour. 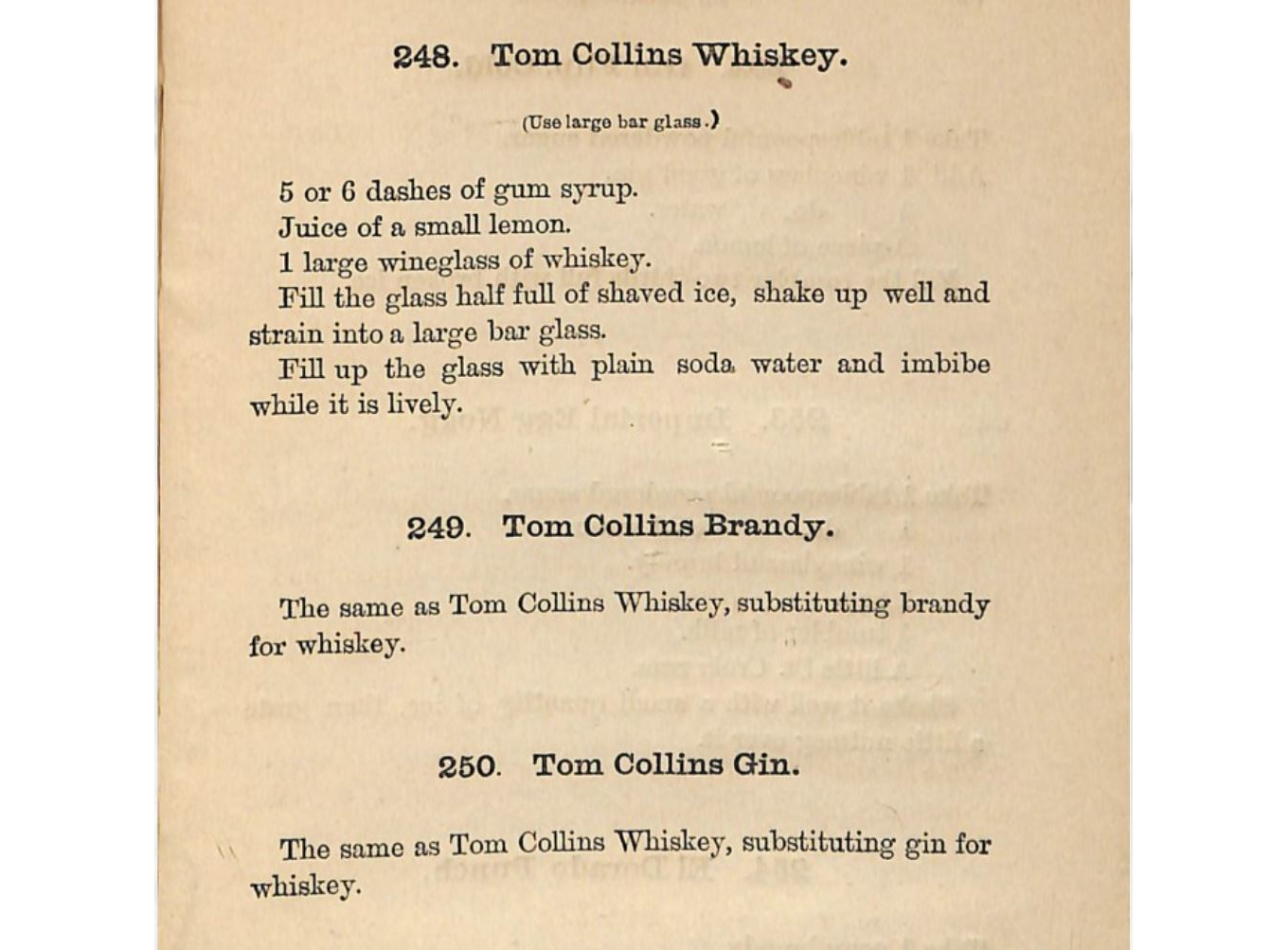 Stuart's Fancy Drinks and How to Mix Them by Thos. Stuart (1904) includes a Tom Collins with old tom gin and a John Collins

Tom Collins
(Use an extra large bar glass)
3/4 table-spoonful of sugar.
3 or 4 dashes of lime juice.
3 or 4 pieces of broken ice.
1 wine-glass of Old Tom gin.
1 bottle of plain soda.
Mix well with a spoon, strain and serve.
Attention must be paid not to let the foam of the soda spread over the glass; this drink must be drank as soon as mixed.

Brandy Collins
Cut a lemon in half, place it in a mixing-glass, add one tablespoonful fine sugar, crush with muddler so as to exract both the juice of the lemon and part of the oil of the rind, fill the glass half full of fine ice, add one jigger brandy. Mix well, strain into a Collins-glass containing a piece of ice, pour in a bottle of plain soda. Stir with a long bar-spoon and serve.