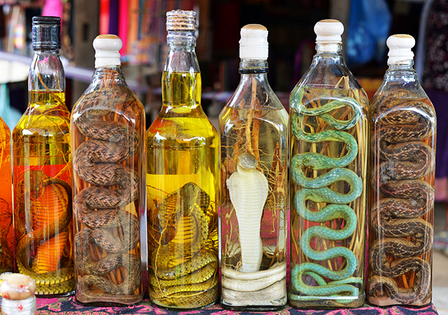 As anyone who's ever tried to design a shooters list knows, the human capacity to tolerate vile flavours in the pursuit of inebriation is quite remarkable. Pretty much anything that can be made into booze has been made into booze at one time or one place, and pretty much anything that can be added to booze has already been added.

That said, in a world full of weird and wonderful liquors, these have to be ten of the weirdest.

Pissky
More likely to be found in an art gallery than on the speed rail - so far at least - Gilpin Family Whisky is the brain child of diabetic product designer James Gilpin. And it's made from the sugar-rich urine of elderly diabetics, including Gilpin's own grandmother. Sugar molecules are "harvested" from "purified" urine and added to the mash. Yum.

Mare's Milk Vodka
Out in the wilds of Mongolia, summer is a very special time: it's the one time of year when horses can be milked. And, unlike other Mongolian livestock, whose milk goes to make cream, cheese, yoghurt and bowl after bowl of salty tea, the mares' milk is reserved for making booze - airag - which is distilled into a type of vodka, arhi.

Sourtoe Cocktail
Since 1973, the Downtown Hotel in Dawson City, Yukon, has been serving drinks with a unique garnish - a mummified human toe. Any drink becomes a Sourtoe cocktail when the toe is added, provided the drinker's lips touch the toe. Over-eager consumers have chugged nine toes over the last four decades - the fine for swallowing was raised from $500 to $2,500 in 2013.

Bear Paw Whisky
As anyone who's visited Bangkok's Khao San Road will know, rice whisky comes with a bewildering range of manhood-enhancing additions, from snakes through to scorpions. Yet bear paw whisky is an especially high status drink in Laos, where moon bears are in danger of being hunted to extinction: you can even pick up a vat at a petrol station.

Dog Beer
Mercifully, this beer isn't made from dogs. It is, in fact, made for dogs. No fewer than two Australian companies - Dog Beer and Bowser Beer - are making "beers" for pooches, so one's canine companion can crack a stubbie at the same time you do. Both brands are non-alcoholic, probably fortunately, and made from meat, which is nice - for dogs.

Blood and Milk
Traditional Maasai herders in Kenya and Tanzania are quite obsessed with their cattle - which also provide most of their diet. A favoured cocktail? Nailanga: fresh, raw cow's blood mixed with fresh, raw milk served at, well, blood heat. To make it extra appetising, the gourds in which fresh milk is stored are sterilised with cow pee.

Taxidermy Beer
If there's one thing more conceptually disturbing than a 55% alcohol "beer", it's a 55% alcohol "beer" served in a dead animal. Yes, the publicity hounds over at Brewdog broke new and alarming ground with their End of History release in 2010. Priced at either £500 or £700, the lethal brew was sold inside taxidermied stoats, squirrels and one hare. All eleven "bottles" sold out. Go figure.

Baby Mice Wine
Staying with the dead animals theme, one of the least-appetising medicinal drinks available in Korea is baby mice wine. Yes, that's baby mice "matured" in a bottle of soju for at least a year. They need to be no older than a couple of days, since otherwise the fur might spoil the drink. Eek. Quite literally, eek.

Hot Beer
Served in a polished chunk of bamboo, tongba is a traditional Himalayan beer. And, as you might expect in a place that gets chilly in winter, it's served hot. And grainy! Whole grains of millet are cooked, then fermented for a few months. When it's ready for drinking, just add hot water, slurp the diluted alcohol through a straw, and repeat until all the booze is gone.

Cocaine Wine
During the late nineteenth century, a morphine addict named John Pemberton set out to copy a best-selling European tonic - cocaine-infused wine. He marketed Pemberton's French Wine Coca with the claim that it was "a most wonderful invigorator of sexual organs". When his county banned alcohol (although not cocaine), Pemberton debuted a new product: "Coca-Cola: the Temperance Drink". And so a star was born.