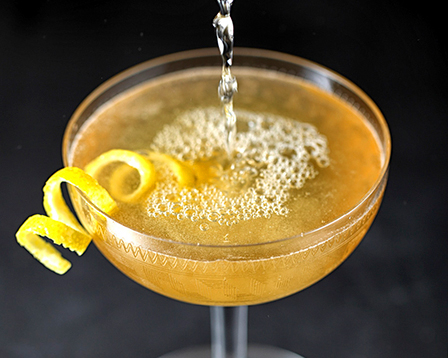 The Sidecar is a classic cocktail made with cognac, triple sec orange liqueur and lemon juice. Made to be on the slightly sour side of balanced, it is often served in a glass with a sugared rim to compensate. However, modern bartenders tend to forgo the sugared rim and balance when mixing with the addition of a dash of sugar syrup or another sweetener.

The proportions of this drink are debated as much as its origin. Perhaps due to ease rather than balance, the equal parts formula (1 x brandy, 1 x triple sec and 1 x lemon juice) was the earliest published recipe (Robert Vermeire's 1922 Cocktails: How to Mix Them and Harry McElhone's 1922 ABC of Cocktails) and still seems popular to this day.

In his 1948 Fine Art of Mixing Drinks, David A. Embury writes of the 'equal parts' Sidecar, "This is the most perfect example of a magnificent drink gone wrong". He argues, "Essentially the Side Car is nothing but a Daiquiri with brandy in the place of rum and Cointreau in the place of sugar syrup or orgeat." Embury then gives his 8:2:1 Daiquiri formula (2 brandy, 1/2 triple sec and 1/4 lemon juice).

In his 1930 The Savoy Cocktail Book, Harry Craddock calls for 2 brandy, 1 Cointreau and 1 lemon juice.

MacElhone and Vermiere' s equal parts recipe are referred to by some as belonging to "the French school" while the Savoy's 2:1:1 formula is said to be from the "English school".

My own Sidecar recipe takes the middle ground between The Savoy and the 'equal parts' camp. I also find this drink benefits from a dash of Pineau des Charentes or sugar syrup to help balance the citrus and, if using just-out-the freezer ice, a little added dilution. However, the most popular Sidecar recipe seems to be 1½ cognac, 1 triple sec, ½ lemon juice.

There have been periods when it has been fashionable to coat the rim of the glass in which this drink is served with sugar. The earliest written reference to this is in 1934. Thankfully sugar rims are now out of vogue and, as Embury writes in his book, "A twist of lemon may be used if desired and the peel dropped into the glass. Otherwise no decoration."

In his 1948 Fine Art of Mixing Drinks, David A. Embury says of the Sidecar's origin: "It was invented by a friend of mine at a bar in Paris during World War I and was named after the motorcycle sidecar in which the good captain customarily was driven to and from the little bistro where the drink was born and christened."

Embury doesn't name the bar but it's commonly assumed that he meant Harry's New York Bar and that the cocktail was created by its owner, Harry MacElhone. However, in his own 1922 ABC of Cocktails he credits the drink to Pat MacGarry "the Popular bar-tender at Buck's Club, London", but in later editions appears to take credit for the drink himself. The fact that MacElhone worked alongside Malachi "Pat" MacGarry at Buck's Club when it first opened just a few years earlier in June 1919 may have some bearing on this.

MacGarry being the originator of the Sidecar is further reinforced by its first appearance in print, in Robert Vermeire's Cocktails How To Mix Them published in May 1922, a few months prior to Harry MacElhone's ABC of Cocktails.

Side-Car.
Fill the shaker half full of broken ice and add:
1/6 gill of fresh Lemon Juice.
1/6 gill of Cointreau.
1/6 gill of Cognac Brandy.
Shake well and strain into a cocktail-glass.
This cocktail is very popular in France. It was first introduced in London by MacGarry, the celebrated bar-tender of Buck's Club.

Like so many classic cocktails we shall probably never know who created/named the Sidecar cocktail but it would appear to have been created by MacGarry in London but was then made popular by Harry MacElhone at his bar in Paris.

In the 1938 French-language version of his book, Vermeire adds weight to recent French adoption claims by stating that the south of France was the drink's home. I've made my home in Sussex but I wasn't born here! And before anyone suggests it, no evidence supports the Sidecar being "invented at the Carlton Hotel in Cannes."