Eggs are essentially reproductive cells from everything from chickens to ducks and quails but here we are specifically looking at chicken eggs, their characteristics and how you should handle, store and use eggs in cocktails.

Egg white adds viscosity and mouthfeel to cocktails and drinks such as sours only taste their best when made with added egg white. Egg white can also add an attractive foamy head to cocktails and the amount of foam produced can be extenuated using a Dry Shake. However, raw eggs can be hazardous to health, so you may decide it is safer to use commercially produced pasteurised egg white, particularly if you are infirm or pregnant (but then you probably shouldn't be drinking cocktails anyway).

Unfortunately, egg white in cocktails gives off an aroma not unlike dog breath or a damp dog's coat. This should be masked with a few drops of bitters dropped onto the drink's foamy head, expressing citrus zest oils (twist) over the drink or by dusting with chocolate, nutmeg or cinnamon.

Too much egg white in a cocktail is detrimental and half of the white from a medium sized egg or 15ml/½oz of pasteurised egg white is plenty. When using fresh eggs rather than pasteurised egg white, I tend to crack eggs and separate their white into a small plastic squeeze bottle and then use this to squeeze the desired amount of egg white into each cocktail. Tip 1: Consider using an egg separator, a nifty tool which as its name suggests separates and retains the yolk while allowing the yolk to flow through into your receptacle below. This helps avoid the chance of contamination from the shell by using the shell as a separating tool. Tip 2: It pays to shake the bottle before use to slightly loosen the egg whites. Refrigerate the bottle of egg white and use within 48 hours or preferably sooner.

Like egg white, egg yolk adds texture and also subtle flavour and a rich sweetness to cocktails. Egg yolk is essential when making Nogs and Flips.

A small percentage of people are allergic to eggs with reactions against egg white more common than reactions against egg yolk. While not experiencing a true allergic reaction, some people have an intolerance to egg white. Whether allergic, merely intolerant or simply having a dislike for eggs, some people need/want to avoid egg and egg products, so bar menus should indicate their use in cocktails.

I'm sure I've suffered more upset stomachs from drinking too much alcohol than I have as a result of bad eggs. That said, eggs are susceptible to Salmonella contamination so it's worth taking steps to reduce the risk of Salmonella poisoning so you should be aware of the following dos and don'ts.

2. Use eggs well before their use-by-date and preferably eggs stamped with the British Lion eggs safe logo. On 11th October 2017, The Food Standards Agency changed its advice to say that British Lion marked eggs are safe to be eaten raw by vulnerable groups such as infants, children, pregnant women and elderly people. More than 90% of British eggs are now produced within the British Lion scheme, which requires producers to vaccinate their hens against salmonella and to test for salmonella.

3.Use small or medium eggs rather than large sized eggs (as hens grow older, they will produce larger eggs so small eggs are from younger birds).

4. Preferably use organic eggs as they are laid by hens who have been reared in the most humane way possible. Everything from their housing, freedom of movement and food is strictly governed. After organic, free-range is the next best environment for a hen to be raised and then barn eggs.

5. If you buy eggs which have already been refrigerated (usual in USA), then you should keep them in the fridge or they will sweat. If you purchase eggs at room temperature (the norm in Europe) then you should be sure to store them below 20°C / 68°F and ideally refrigerated between 0.5 to 2.5°C / 33 to 36.5°F.

6. It is best to store your eggs in a sealed box on the bottom self of the refrigerator. Storing in a box prevents smells permeating through the shells and flavouring the egg. Conversely you may want to place citrus peels, spices, truffles or teas in the box, or cotton wool infused with aromatic oil to flavour your eggs.

7. Test the freshness of an egg by placing in water. A fresh egg will sink but a stale one will float.

8. Salmonella contamination starts on the shell, moves to the egg white and then lastly the yolk, so always wash the shell of an egg under running warm/hot water immediately prior to using. However, due to their protective coating, don't wash eggs until ready to use. See washing eggs below.

1. You are uncertain about their freshness.

2. There is a crack or flaw in the shell.

3. They don't wobble when rolled across a flat surface.

4. The egg white is watery instead of gel-like.

5. The egg yolk is not convex and firm.

8. Don't consume raw eggs at all if are pregnant or have a weak immune system or other health issues, particularly to the very young or very old.

9. Don't think that alcohol kills salmonella, it doesn't, at least at proof levels used in bars.

10. Don't crack eggs on the side of your cocktail tin, salmonella may be present on the shell so beware of transferring this and cross contaminating your shaker.

Eggs have a natural coating known as a cuticle or bloom that seals the eggshell pores so reducing moisture loss from the egg. This also helps prevent bacteria from breaching the shell. In the U.S. most eggs are washed and "sanitized" so removing the bloom, then a small percentage of U.S. egg packers re-coat their eggs with an edible mineral oil. European eggs are not washed by egg packers so are sold with the natural bloom. Wherever you are, you should not wash your eggs until immediately prior to use as if they have a coating then it best to retain it as long as possible. When you do wash your eggs, then rinse under running warm/hot water.

When eggs are freshly laid their temperature is that of the body of the hen they have just popped out of, 41ºC/105ºF. As they cool to ambient temperature, the liquid inside the eggs contracts more than the shell, causing the inner shell membrane to separate from the outer shell membrane and so form an air pocket, or air cell. Over the following hours/days, moisture and carbon dioxide from the egg escape through the shell's pores and due to air pressure, air enters via the same pores so enlarging the air cell.

When you peel a hard-boiled egg, you tend to find one pole of the egg is flattened due to the air cell which usually occupies the large end of the egg, displacing the egg white to form a flattened end when boiled.

Due to the air cell developing and growing with time, older eggs are easier to peel that fresh eggs. The development of this air pocket also facilitates a useful test for the freshness of eggs. If the buoyancy caused by this air pocket causes an egg to float in a bowl of water, then it is bad and should be discarded. Only eggs that sink and stay submerged should be used in cocktails.

The shell colour has no influence on flavour or nutritionally value, yet despite this, different countries favour particular shell colours. White eggs are more prevalent in the USA, while brown shells are preferred in the UK. Marketing also dictates that most organic eggs and free-range eggs are brown. Indeed, I recall a food nutritionist say, "brown food is good and white food is bad". This may apply to bread and rice, but not to eggs.

While shell colour has no baring on flavour, the colour of the yolk does. This is influenced by plant pigments in the hen's feed - more grass based feed or corn in particular. Tasty feed equals tasty eggs.

Eggs are very nutritious, containing high levels of protein, vitamins, selenium, iodine, choline, minerals and omega-3 fatty acids. Eggs are low in calories (around 65 calories in a medium-sized egg) with most of the calories are in the yolk which is also denser in vitamins and minerals.

The egg white (or albumen/glair/glaire) forms around fertilized or unfertilised egg yolks and its primary purpose is to protect the yolk while also providing nutrition for the growth of the embryo (presuming the egg is fertilized).

Egg white comprises approximately two-thirds of a chicken egg by weight with water accounting for some 90% of this, with the remaining 10% being protein, glucose, carbohydrate, sodium, fatty material and vitamins. Egg white is cholesterol free and an average sized egg white has a mere 17 calories. Egg whites contain just over 50% of the overall egg's protein content.

Enclosed by the vitelline membrane and suspended in the egg white by one or two spiral bands of tissue called chalazae, the spherical egg yolk contains the egg cell or ovum (embryo). Its yellow colour is due to lutein and zeaxanthin, which are carotenoids known as xanthophylls.

The yolk is rich in vitamins and minerals and contains all the egg's fat and cholesterol, and nearly half of its protein. Although just one-third of the egg's overall weight, the yolk contains three times the energy (calories) of the egg white and all of an egg's fat-soluble vitamins A, E, K and most notably D - egg yolk is one of the few foods naturally containing vitamin D.

Double yolks - two yolks in one egg, come from young hens (pullets), typically 16 to 20 weeks old which are still settling into their egg laying cycle and ovulating too rapidly. 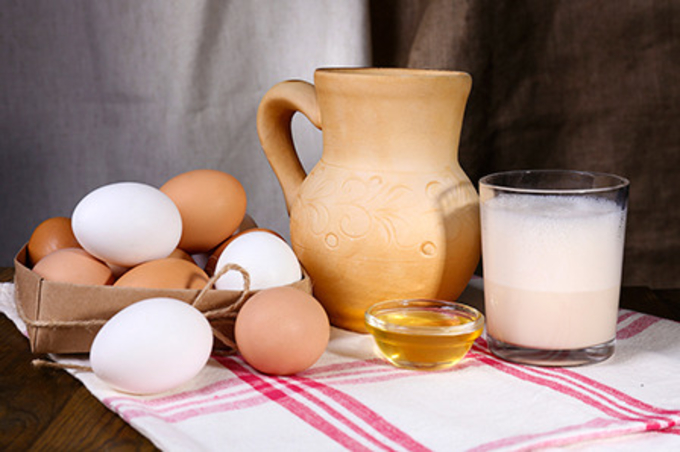 ... comment(s) for Egg dos and don'ts & using eggs in cocktails