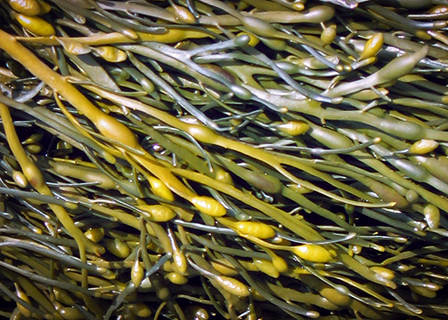 You know seaweed, right? Slimy underfoot, scourge of beach holidays, stinking away on the sand as it decomposes among dead fish and rusting Coke cans.

But a nutritious and tasty dietary supplement? And a potential game-changing ingredient in the world of mixed drinks? Really? We spoke to Ole Mouritsen, director of the Center for Biomembrane Physics at the University of Southern Denmark, and author of a research paper on seaweed and umami in food in new scientific journal Flavour, for his thoughts on seaweed's potential in the bar world.

In Asian countries, seaweed is a staple cuisine and one that's recognised for bringing rich umami flavours into food. Umami, if you've been living under a rock, is the elusive fifth 'flavour' after sweet, sour, salty and bitter. It's an amalgamation of the Japanese for 'delicious' (umai) and 'essence' (mi). Technically, it is naturally occurring Monosodium Glutamate (MSG), discovered by Japanese chemist Kikunae Ikeda in 1908, and has since become a widely used flavour enhancer, labelled E621 on European foods. Our tongues respond to MSG - specific glutamate receptors were discovered in 2000 - so it seems obvious that it should be explored in the world of mixed drinks.

Seaweeds can be rich in free chemical form MSG, with konbu seaweed (Saccharina Japonica) containing more free MSG than any other organic material. It is used to make dashi, the soup stock behind all Japanese soups. Other types, such as Laver (Porphyra app.) and Nori (used to make sheets of seaweed in sushi) also contain large amounts of glutamate.

Ole Mouritsen, at the University of Southern Denmark, has undertaken research into using such seaweeds with Noma, the Copenhagen-based experimental restaurant, known for foraging obscure ingredients from the countryside. They made dashi with different types of seaweed, all of which resulted in stocks that contained far more glutamic acid than western chicken stock.

In addition, they used Dulse (Palmaria palmata), a red seaweed that grows in the Atlantic and is traditionally used in Ireland, Scotland and Iceland as well as the coasts of North America, to make flavoured bread, cheese and ice cream. Dulse boasts liquorice, smokey and nutty tastes. For the ice cream, they started with dried seaweed, cold-infused it in milk, then puréed the mixture, dissolved sugar into it and froze it using a Pacojet mixer. It resulted in a purple, light and floral ice cream with a taste profile analogous to Japanese Green tea ice cream.

This is significant given that techniques such as cold infusions and machinery such as pacojets are increasingly familiar in the bar world. Along with gastrovacs and cooking ingredients sous vide (vaccum packing and cooking in a water bath) that suggests there are plenty of ways to extract umami-rich seaweed flavours for use in drinks, with the potential to infuse in spirits, create extracts, reductions, purees or syrups that can be mixed with alcohol or to layer into drinks. That's not to mention using dried seaweed as a garnish or food pairing. These techniques might currently be limited to the more experimental bartenders who have their own labs, but such is the nature of the cutting edge.

"I don't consider umami restricted only to food, but in the context of bars it is virgin territory," says Ole Mouritsen. "We are still at a very early stage as far as food goes, and have only recently caught on to umami in the West. It's not because we don't have it - it's in Marmite, soy sauce, mature cheeses, sun-dried tomatoes and cured ham among others."

There are, he continues, more than 10,000 varieties of seaweed, with 300-400 of them being edible. Though few of these species have been investigated for their potential in cuisine, the taste profile for those already in use is extremely wide, ranging from chicken-like 'meatiness' to green tea, nuts and liquorice. "Seaweed's key characteristics derive from the ocean, so for most seaweeds there's saltiness, iodine, a sort of 'charred-ness'.

"Quite often, when I drink a smokey whisky - an Ardbeg or Laphroaig, say - I like to snack on dried seaweeds which have complementary flavours such as iodine saltiness, smoky flavours and liquorice notes. Microkelp is very good, bull kelp is even better."

Noma already works with a local distiller that produces an aquavite infused with red seaweed, he added. "It is light purple colour, with a floral flavour. I'm not sure if it brings umami into it, it can be difficult to pick up in high alcohol. I also know of a company in Germany which makes a sugar kelp wine which is very flavourful, and there are kelp beers on the market in Scotland. Micro algae such as spirolina is already used in some smoothies, of course. I haven't seen much else done using seaweed pulp, though I don't see why not - it would bring an interesting texture to a drink.

"There is a huge basis for complementary flavours - a whole new kingdom to be explored. It's just a matter of having creative bartenders and chefs look into it."

His experiments with Noma used commercially available seaweed, all dried, from shops in London, Japan and Iceland. "It was very easy to get hold of," he says. "Always buy it dried - the best quality, small producers harvest and dry it on the spot, mostly in the sun, or in colder climates, dry it in a wooden hut. Dried seaweed ships very well, and some seaweeds develop 'softer' flavours while they age - though others spoil after several months - as they are still enzymatically active."

Deriving alcohol direct from seaweed holds some potential, and is "probably the biggest question facing the biofuel industry", he says, though the fact that fermentation largely produces methane rather than methanol presents a problem, especially for potable alcohols.

Tony Conigliaro, one of the world's leading experimental bartenders who boasts his own lab, attended the recent launch of the journal Flavour and says an appreciation of umami-rich drinks, and the opportunities presented by seaweed, opens up a new avenue for bartenders.

"I've been using seaweed for a while - I started five years ago with a Dirty Martini-By-The-Sea, where we cooked seaweed into vermouth sous vide, and we've making dashi for a while, using it in Bloody Mary's, so seaweed definitely shows up on the radar. More recently, we did something with Laphroaig, making really interesting infusions and tinctures from seaweed we literally got off the beach. We dried it out and cooked it in different ways - it brings some really interesting notes to a drink."

A newer creation, the Woodland Martini, boasts umami from an interaction between shitake mushrooms and sherry, he added.

"I think some people definitely pick up on umami in savoury drinks, it enhances the flavour and creates a wonderful mouth-feel, it's kind of textural - which shows you don't need to cheat by adding other things to create texture but can use natural things to create umami notes."