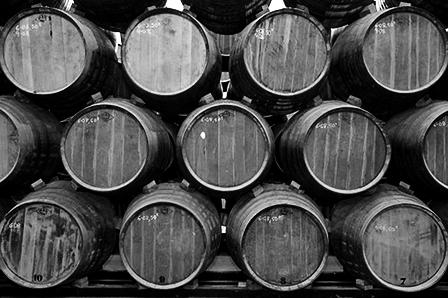 Since cocktails left their disco-era style to the 1990s and grew up into the sophisticated drinks we know and love, a trend developed towards ageing cocktails - premixing components, then resting and marrying them for periods of time before serving them.

The practice of holding spirits, wine and beer in casks has been going on for centuries. It has evolved from the necessity of storage into practically a science - we have a good understanding of what oak adds to a liquid, what it removes, and the processes that take place in cask.

But there is still an element of something magical going on, and a certain amount of faith in this black art is required - it's not called the 'angel's share' for nothing. What we mean to say is that aging in cask can have results that range from the inexplicably wonderful to the bafflingly substandard. It is this potential for the sublime - or the ridiculous - that is fascinating, and why this industry enjoys experimenting with barrel-aged drinks.

Here is some of what we know:

Barrels come in all sorts of sizes, types and ages. New oak casks will work quickly to impart flavour, whereas casks that are on their second or third fills will naturally have a decreased effect. You can acquire casks that have previously held other liquids - sherry, wine and bourbon to name a few, as well as choose between differing char and toasting levels. The size of the cask affects the surface area to liquid ratio, with smaller casks working much faster than larger ones. It's important to recognise that all of these factors, as well as time, will have distinct consequences on the drink that comes out of the barrel.

Chromatography reveals that a number of phenolic compounds and furanic aldehydes are produced as a result of barrel aging. These compounds define what we recognise as key flavour identifiers of aged products - dry, vanilla, nutty, resinous, fruity, sweet and toasted characteristics to name a few. We can break down the reactions that produce these flavours into three categories: infusion, oxidation and extraction. 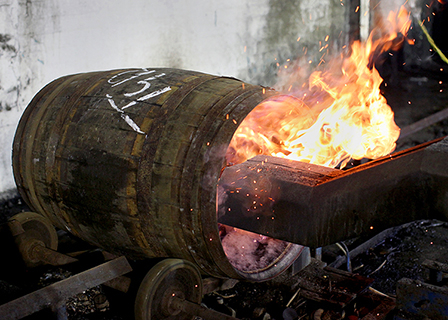 Infusion refers to all the 'good stuff' that a cocktail will take directly from the wood. Think of a cask as a reverse teabag, a compact cylinder of flavour.

The 'wood' flavour that we are most familiar with is actually vanillin: it provides most of the vanilla, butter, caramel, banana and coconut characteristics of an aged spirit. Vanillin naturally occurs - surprise surprise - most abundantly in vanilla (around 2 per cent composition by weight) and is responsible for vanilla's claim to being the second most popular flavour in the world (chocolate is first, but it also contains vanillin, as does breast milk). Of course vanilla and vanillin are not always welcome guests and do have a tendency to take over the party, but with a clear prescence in aged spirits there is certainly a relevance and a basis for a little vanillin manipulation in aged cocktails.

All barrel-aged drinks will extract a certain amount of tannin from the wood. Tannin is more prevalent in European casks as opposed to American, and contributes a great deal towards the colour of an aged spirit. On the palate it is apparent as a strange drying sensation, and if carefully integrated can add welcome structure and tactile balance to a drink.

Oxidation is a crucial part of aging some spirits and wines. It aids in the development and complexity of the liquid. The oxidation of ethanol (alcohol) converts to acetaldehyde, the compound responsible for sherry-like nutty, grassy notes. It is this oxidative effect that provides sherry and vermouth (vermouth also being partially oxidised during production) with their characteristic finish.

The subject of sherry actually has a great relevance to the barrel ageing debate. Oloroso sherry is a marriage of wine and spirit that is aged in cask - in fact the same ingredients (in principle) that are used to make a Martinez or a Manhattan - spirit, wine and bitters. On that basis, I think it's hard to dismiss the very concept of barrel-ageing cocktails, as some do, when the same theory applies to such great effect in the production of sherries?

Continuing with acetaldehyde, it can in turn be oxidised itself, converting into acetic acid. Acetic acid in small quanities provides a 'bite' and 'fullness' to a cocktail, but in larger levels can add a harsh edge and so must be closely monitored. Wine oxidises and spoils much quicker than spirits, so most common barrel-aged cocktails have a kind of safety barrier, thanks to being higher in abv and sporting a greater resilience to the effects of oxygen.

Extraction is all about the softening of the drink. This process is thought to occur thanks to the presence of hemicellulose within the wood (around 25 per cent of the total composition of oak). Hemicellulose reacts with acids present within the liquid and produces complex reducing sugars. It is these sugars that slightly soften the drink, as well as giving the effect of integration and consistency. Interestingly, it's thought that a higher acidity will result in a greater softening effect, which is exactly why drinks containing vermouth work so well. For the particularly inspired amongst you, experimenting with bolstering the acid content of your cocktails before ageing may yield interesting results...

These are just some of the effects of barrel ageing cocktails. Clearly, there are many factors to consider and it is not simply a case of putting a drink in wood and hoping for the best. However, careful consideration of the forces at work can and does yield fantastic results.

How to do it well: A Jameson barrel-aged experiment 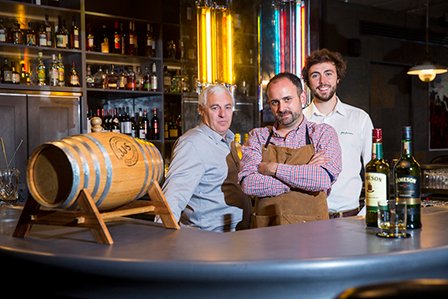 Irish whiskey producers, Jameson, approached Myles Davies, the groups bar manager for Hix, to create a serve using their whiskey which could be aged.

After a series of long conversations, going over the complications and benefits of ageing, Myles agreed to come on board with the project. Having experimented before with wood, Myles knew that temperature fluctuation would be his biggest problem.

As bars purchase small barrels and leave them on their bars for anywhere up to six months the wood and liquid experience huge jumps in the temperature. Busy bars create a heated environment whilst the temperature can dip right down when the space is closed, and up again when staff come in to set up and crank the heaters on. By the end of this the liquid is ruined.

Luckily Hixter Bankside has a controlled environment for the wine cellar where the barrel was able to rest undisturbed by temperature fluctuations. 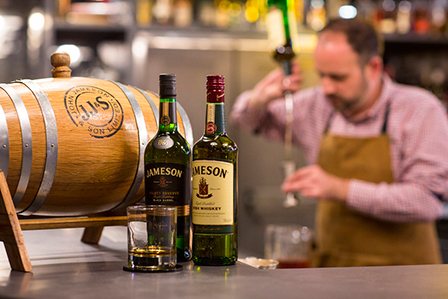 Jameson wanted their cocktail to be approachable and not too bitter or strong. After a lot of playing around Myles came up with an Irish Manhattan-style drink.

Drawing on Hix's dedication to British produce, Myles decided to use The Somerset Cider Brandy company's Kingston Black Apple Aperitif as the sweetening agent alongside the vermouth and a dash of liquorice bitters added to the finished cocktail.

Once the drink was created, Jameson's Mast Cooper, Ger Buckley, made a bespoke 15-litre barrel. As Ger said "Wood is the magical change in ageing, the taste of aged whiskies comes from oak."

To make the barrel a standard American bourbon cask was cut down to create a smaller barrel, giving a sweetness from the charring, in particular vanilla.

After several months mellowing in the barrel, Myles cocktails, Autumn Leaves, comes out smoothed, softened and wonderfully palatable. Once aged it is decanted into a steel-lined barrel, so no further flavours can be imparted, and is served to the guests once stirred down over ice. 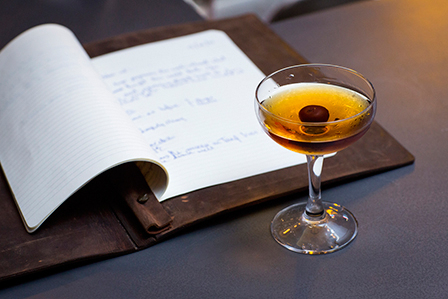 Some might say that barrel ageing is unpredictable, or that it degrades, overpowers, over-oxidises, or undermines, and to a certain extent this debate comes down to classicism. Should we be meddling with expertly blended whiskies and aromatically balanced vermouths? Who are we to tamper with the nuances of gins that have often been perfected through generations of careful tweaking? My personal conclusion is that as bartenders, it is our job to match up ingredients, to amplify specific subtleties of spirits and combine them with choice ingredients, to produce something that is greater than the sum of its parts. As long as we are doing that, then we have carte blanche. 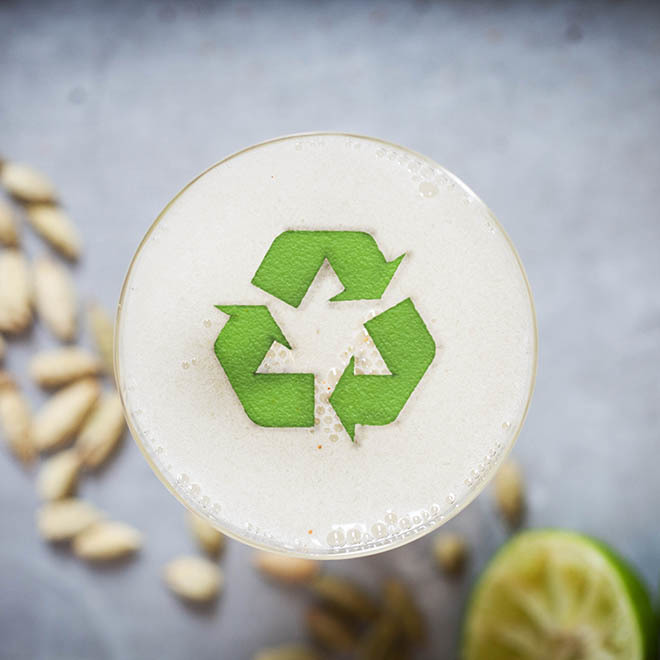