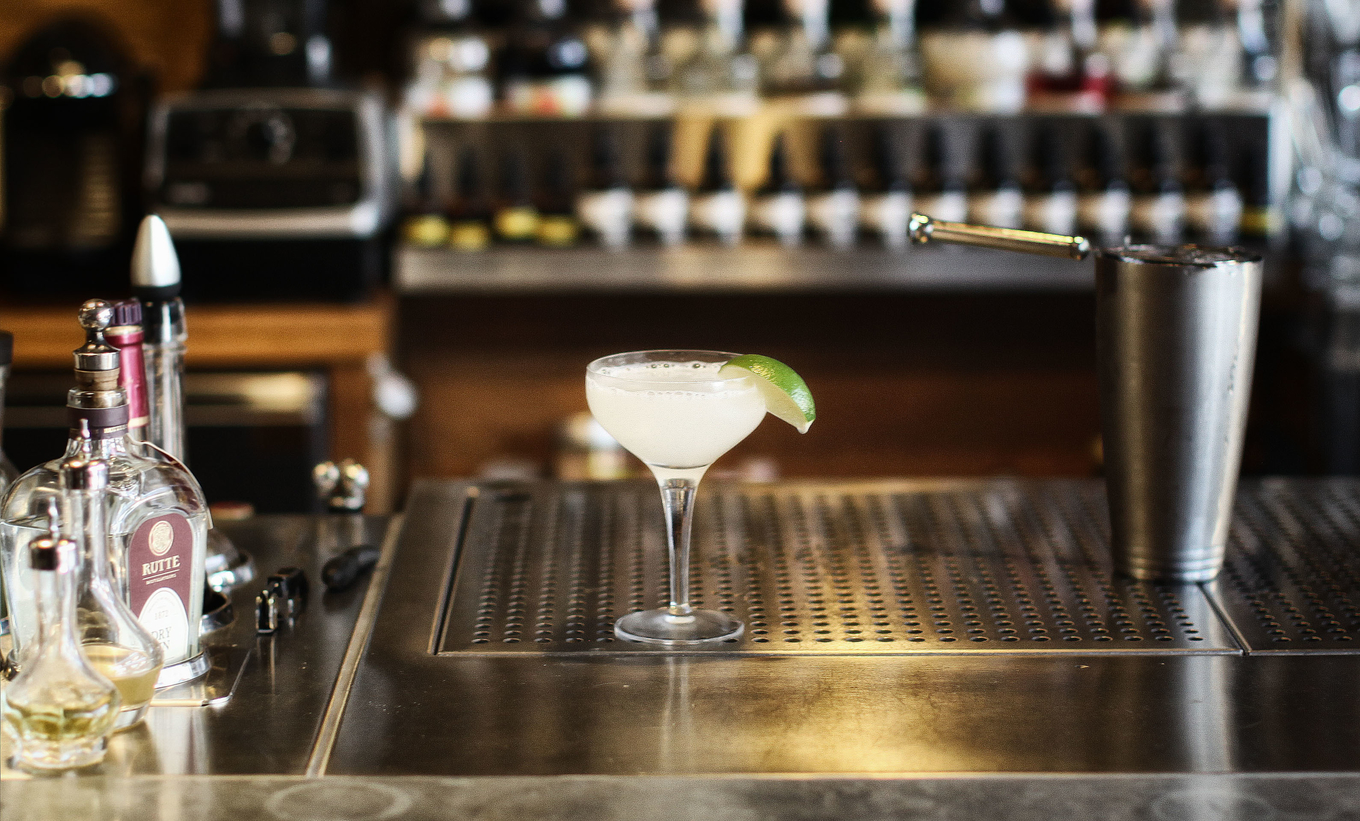 Best recipe & how to make

My quest to find the perfect Daiquiri recipe started in 1997 when Dick Bradsell, England's most famous bartender, said I needed to choose a cocktail with which to test bartenders' skills and make that my own drink.

Knowing my love of Daiquiris, he suggested I order one every time I walk into a new bar in order to make a comparative assessment. I must have ordered thousands since.

Dick Bradsell also introduced me to the other person who has been most influential in my own cocktail making, David A. Embury. In his seminal 1948 Fine Art of Mixing Drinks, Embury wrote, "The Daiquiri, like the Old-Fashioned, deserves even greater popularity than it now enjoys. For example, it is in my opinion, a vastly superior cocktail to the Manhattan, yet most bars sell more Manhattans than Daiquiris. So far as I can ascertain there are two main reasons why more Daiquiris are not sold: The use of inferior rums and the use of improper proportions."

Every few years I have readdressed these two points, fine-tuning what I consider a great Daiquiri - what are the best ingredients? What's the perfect recipe? What method or techniques make it special? There's much more to this cocktail than merely mixing three ingredients together in a cocktail shaker - although, essentially, it's that simple.

In his personal diary, Jennings Cox the American mining engineer, credited with creating this cocktail while working at a mine near the Cuban town of Daquiri in 1898, records his original Daiquiri recipe (to serve six) as follows:
"The juice of six lemons; Six teaspoons full of sugar; Six Bacardi cups ('Carta Blanca'); Two small cups of mineral water; Plenty of crushed ice." 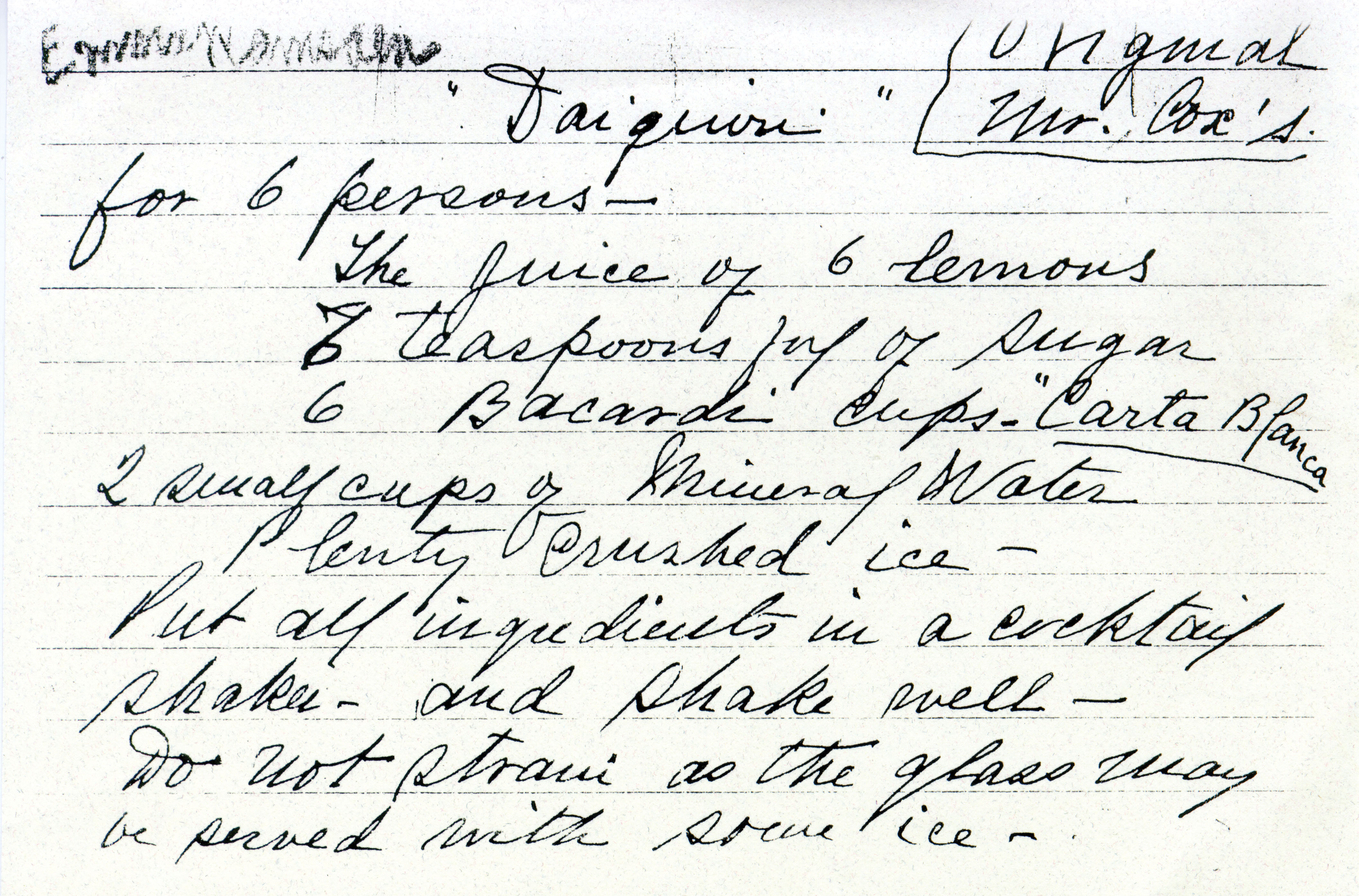 So, a Daiquiri is made using five ingredients: citrus, sugar, rum, water, and ice, so firstly let's address each of these.

Cox's original recipe and other such historical references specify Bacardi Carta Blanca as the rum used to make a Daiquiri. As Bacardi purports to be made using the same strain of cultured yeast and recipe as in Jennings Cox's day, then modern-day Bacardi Carta Blanca is a natural contender.

I find that Bacardi has a delicate savoury mushroom/blue cheese note, which adds a distinctive character that I like in the finished cocktail, but sadly, in Europe Bacardi Carta Blanca has been reduced to a mere 37.5% alc./vol. so I use my own heritage blend.

Carta Blanca is a "light white" rum which has been aged and then charcoal-filtered to mellow and strip out the colour resulting from ageing to make a crystal clear rum so I catagorise as Light (charcoal-filtered) white 1-3yo molasses-based rum.

Obviously, your choice of rum will lend its own distinctive character to your Daiquiri and Dick preferred his Daiquiris made with Havana 3-Year-Old rum, a rum which I categorise as a mellow light (white/gold) 1-3yo molasses-based rum.

The above rums are aged 2 to 3 years and light-bodied rums, exactly the style of rum needed to make an authentic delicate and subtle Daiquiri. However, the Nuclear Daiquiri is proof that Daiquiris can be delicious with full-bodied rums set against equally bombastic modifiers.

Although Cox's recipe states "lemons" it is most likely that he is referring to limes which are native to Cuba and that the confusion arises due to the common Cuban term for lime being 'limón'. Again, to quote Embury's wisdom, "Actually lemons are almost unknown in Cuba, whereas lime trees grow in everyone's own yard."

There's a consensus that a Daiquiri should be made with limes but not all limes are created equal and Davide Segat, argues that a combination of 2/3rd lime juice to 1/3rd lemon juice (of the varieties available in the UK) is more like the juice from limes available in Cuba. Lemon juice is certainly slightly sweeter than lime juice and indeed a combination of the two juices does influence a Daiquiri's flavour. His Daiquiri is certainly delicious [recipe at the bottom of this page].

As I said, broad consensus has it that Daiquiris should be made with lime and crucially your limes should be ripe (soft rather than golfball-like) and freshly squeezed immediately prior to making the drink.

Striving for sustainability and cutting waste has led many to start using lime husks after they have been squeezed, indeed this plays a part in Marcis Dzelzainis' (Sager + Wilde, London) recipe [also below]. I've experimented with this and it's surprising how much bitterness is added when shaking with even one lime zest twist, let alone a husk. If shaking with lime peel then the quantity of sugar used will need to be increased to maintain the balance of the cocktail.

I favour cutting zests from each lime prior to peeling and then expressing the oils of one over the surface of the finished cocktail before discarding. (The rest of the peel can be used to make oleo-saccharum but in my view, spent husks are best consigned to the compost heap.)

Embury's own recipe calls for sugar syrup and this is something with which I have previously whole-heartedly agreed as granulated or caster sugar does not as readily dissolve in cold liquid/alcohol. I've also previously been an advocate of making my own 2:1 sugar syrup rather than buying a proprietary syrup but as Lyndon Higginson (Liar's Club) pointed out to me when he sampled my homemade syrup, it not only allows for inconsistencies, stirring the syrup together as it heats on the hob can impart faint metallic notes from the pan/spoon so use a dedicated wooden spoon to stir your syrup rather than a stainless-steel spoon. (Don't use that wooden spoon for anything else or you risk contaminating your syrup with other flavours.) Commercially made syrups ensure consistency and are usually equivalent to 2:1 syrup in strength (65°brix).

Sugar syrup is arguably easier to measure accurately than spoons of sugar crystals, and a syrup has the advantage of being pre-dissolved. Indeed, you can make a very fine Daiquiri using sugar syrup, but when made with sugar cane caster sugar this cocktail appears to be more alive and vibrant, with pleasing sherbet-like notes.

If using caster sugar then be sure to stir with the lime juice in the base of your shaker to ensure the sugar is dissolved before adding the rum. And preferably use "bar sugar" / "powdered sugar" which dissolves readily and doesn't require stirring prior to shaking. To make this use a mortar and pestle to grind caster sugar into a fine powder. (Icing sugar is not a suitable alternative due to its added de-clumping agents.)

Please also be aware of the difference between cane and beet sugars. Cuban cane sugar was used in the original Daiquiri - its subtle flavour is part of this drink's DNA. Beet sugar is more neutral in flavour and produces a lesser cocktail. When buying caster sugar be sure to only buy packs that specifically state "cane sugar". If the pack merely says, "caster sugar" then this is likely to be made from sugar beet rather than sugar cane. I favour Tate & Lyle Fairtrade Cane Sugar.

When measuring caster or granulated sugar be aware of not only how heaped the sugar on your spoon is, but also the size of that spoon. Follows a rough guide:

For accuracy, I measure using 5ml chefs measuring spoons of powdered sugar tapped so the sugar is level with the top of the measure so consistently measuring 5 grams of sugar.

Embury's mixing instructions are, "Shake vigorously with plenty of finely crushed ice and strain into chilled cocktail glasses." Embury uses crushed ice to add dilution and indeed dilution is a crucial aspect to mixing a perfect Daiquiri. Some bartenders, (Dick Bradsell was one) shake daiquiris with a combination of cubed and crushed ice. However, as crushed ice is so variable in its wetness, so the amount of dilution it adds to a drink is unpredictable and inconsistent.

Wet surfaced cubed ice from an ice machine or the ice well of a bar will add more dilution than ice cubes taken directly from a freezer so with a dry surface. Hence, (as with so many other cocktails) if using ice straight from a freezer consider adding 10 to 15ml of chilled water per cocktail.

When I make a Daiquiri with powdered sugar rather than syrup I make up for the lost dilution by adding 5ml chilled water per cocktail, even when using ice from a machine rather than directly from a freezer. I also aim to shake with such vigour that there is a heap of ice fragments left in the strainer when I fine strain the drink. This makes for an ice-cold Daiquiri with the controlled degree of dilution essential to consistently great straight-up Daiquiris. 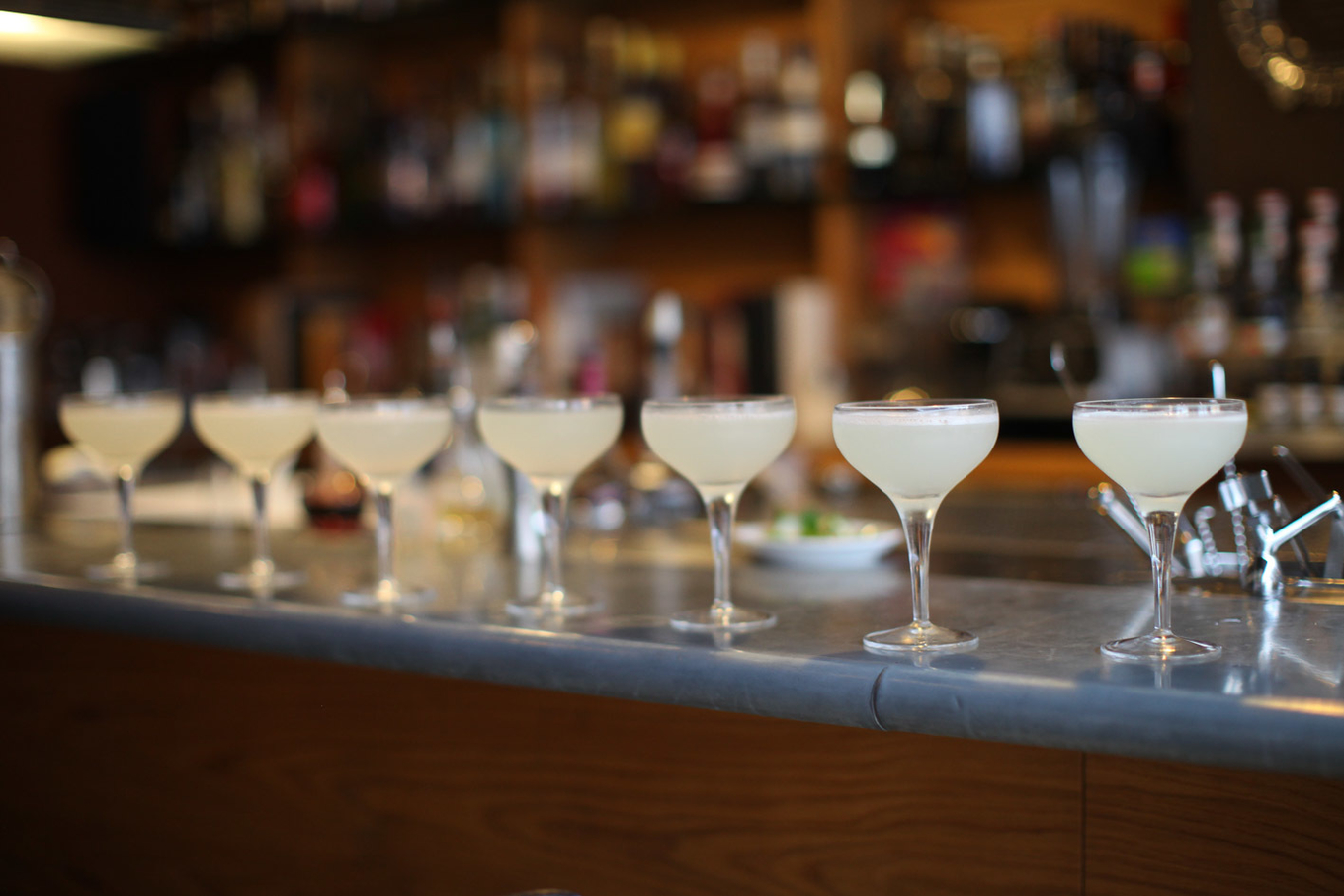 Other bartenders make Daiquiris to more of a Margarita-like formula using twice as much lime than Embury's recipe and this is known as the "countdown" 3:2:1 formula). Similar, but with a splash more rum is the 4:2:1 "London" formula, popular in London during the 1990s, partly driven by ease of measuring due to UK jiggers being 25ml and 50ml.

I have experimented with the "Countdown" and "London" formulas and while tequila is robust enough to shine above the citrus flavour in a Margarita, such a large proportion of lime overpowers delicate (Puerto Rican charcoal-filtered-style) light rums in a Daiquiri only deploy these recipes when using more characterful light and golden rums.

After much experimentation, around 2005, I settled on my rum-forward, less citrusy 10:3:2 Daiquiri formula suited to more delicate light white rums. This originally packed a whopping 75ml (2.5oz) of rum (a mere 2oz of rum would hardly satisfy great Daiquiri drinkers such as Hemingway) but even hardened drinkers appear shocked at such a healthy dose so I have reduced all ingredients proportionately and the following three sets of measures all produce 10:3:2 Daiquiris: 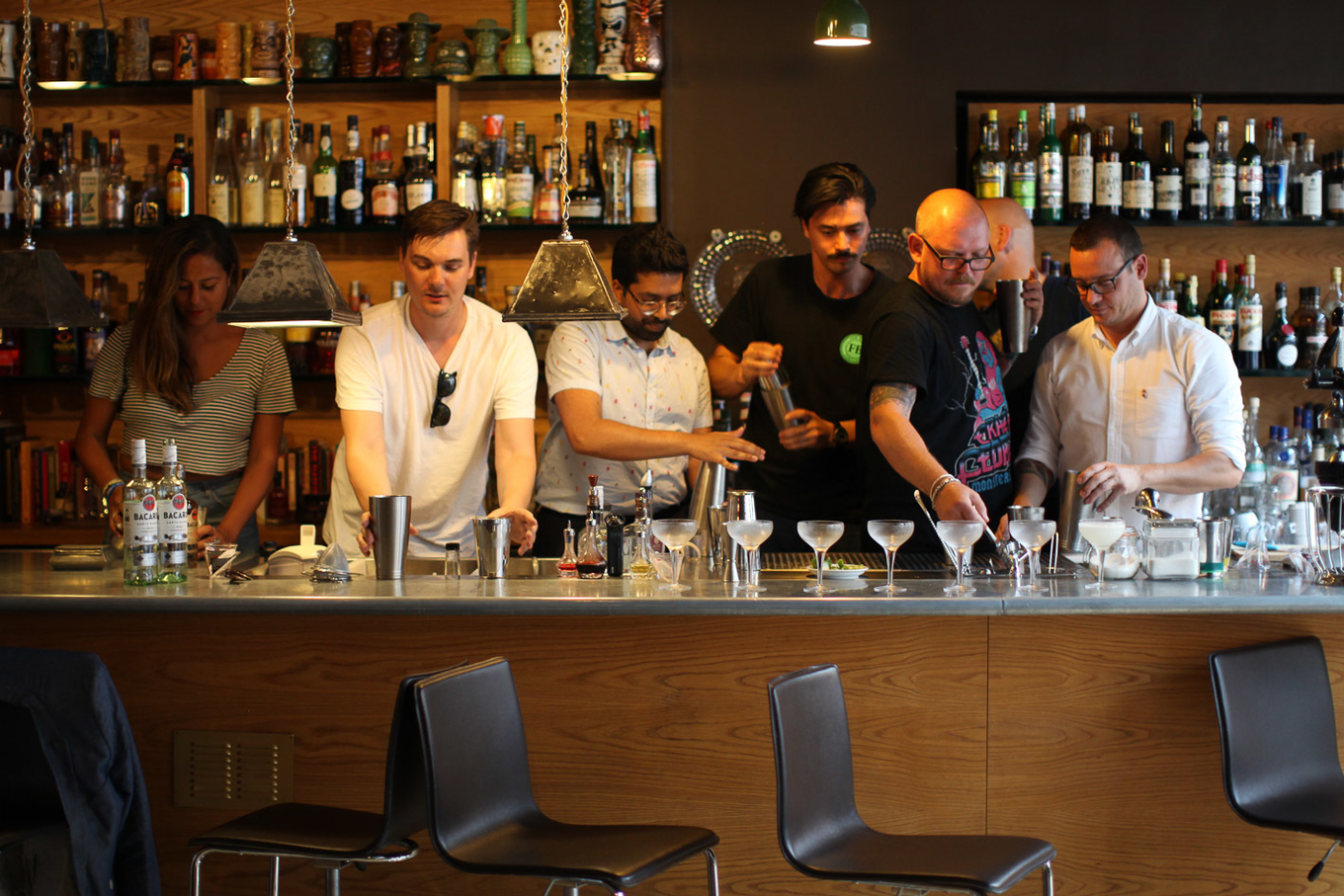 Back in 2018, Metinee "May" Kongsrivilai of Bacardi brought five much-respected bartenders (pictured above) round to my bar for an afternoon of Daiquiri making and experimentation. Each presented their Daiquiri recipe (see below) but something of a consensus was reached, introducing me to yet another formula, the 6:2:1 Daiquiri formula:

The 6:2:1 recipe does indeed make a very tasty, balanced Daiquiri that is a tad more citrus-forward than my 10:3:2 formula. So good is this recipe that I nearly adopted it for my own and, like the 3:2:1 and 4:2:1 formula, the 6:2:1 suits more characterful rums. 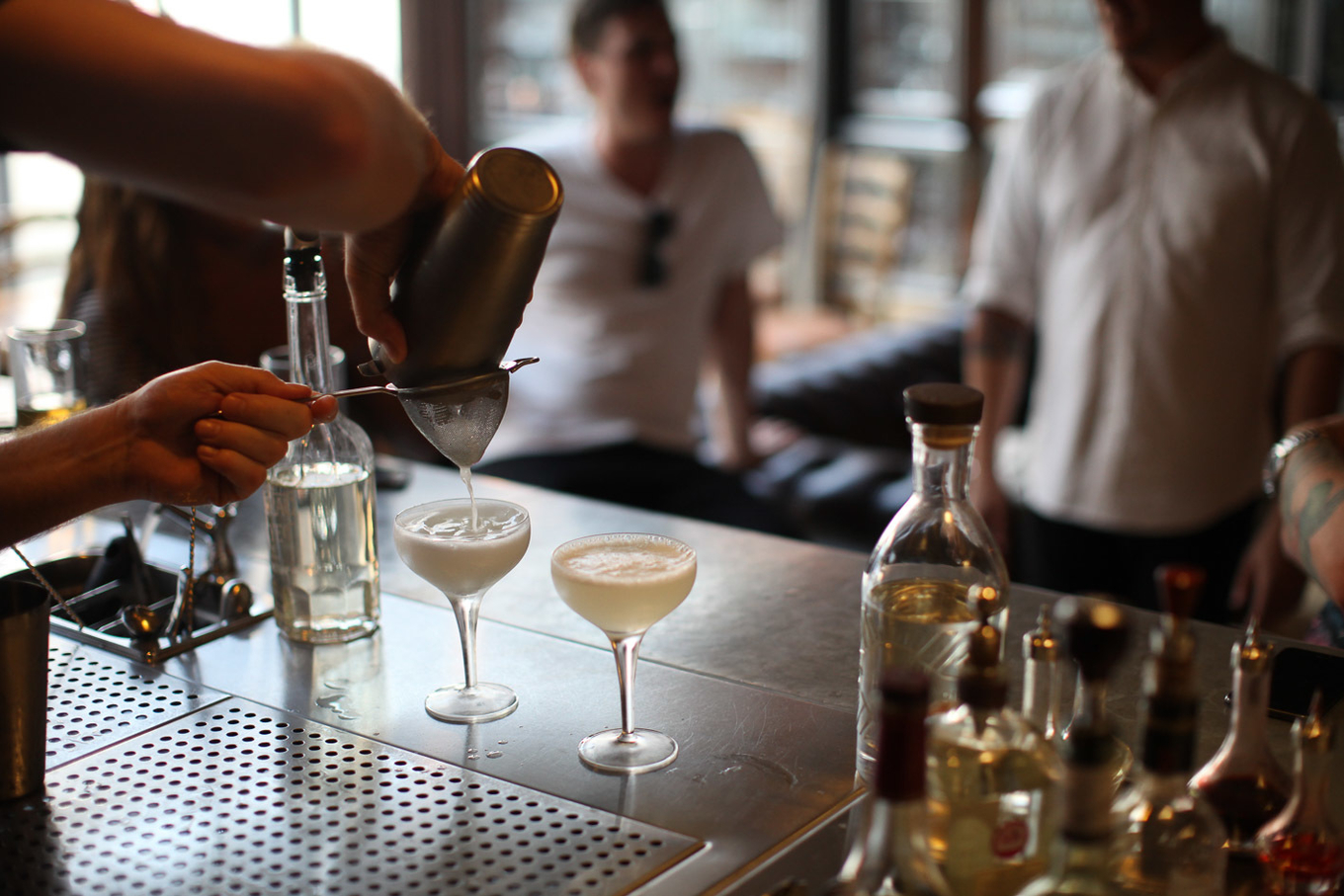 The use of a fine strainer to remove fine fragments of ice that float on the surface of a cocktail, or indeed not bothering to do this is one of the most contentious issues in bartending. I've set out my arguments for fine straining elsewhere on this site, but each to their own.

I'm indebted to the following for their input and recipes during what was a very enjoyable afternoon of Daiquiri making. 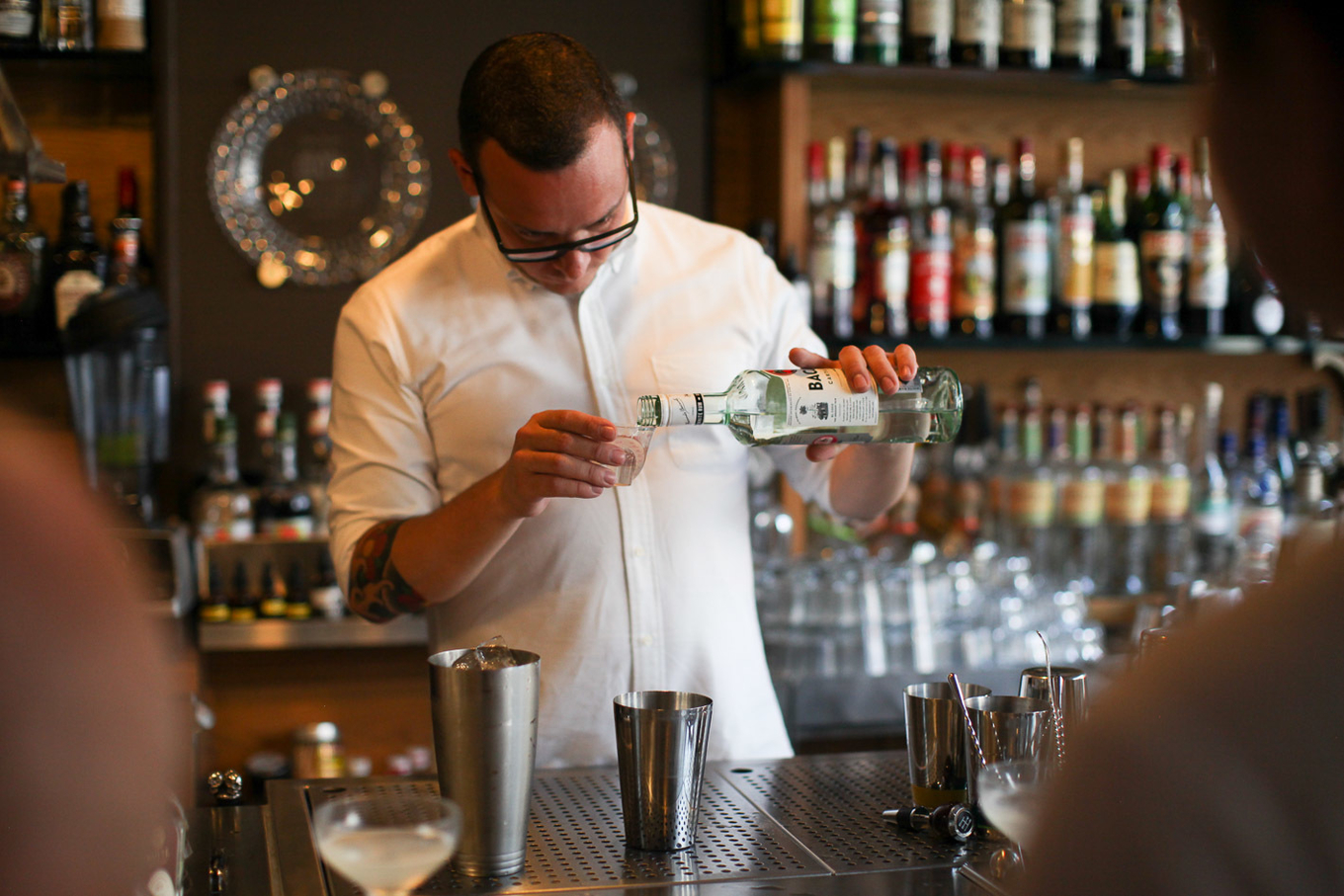 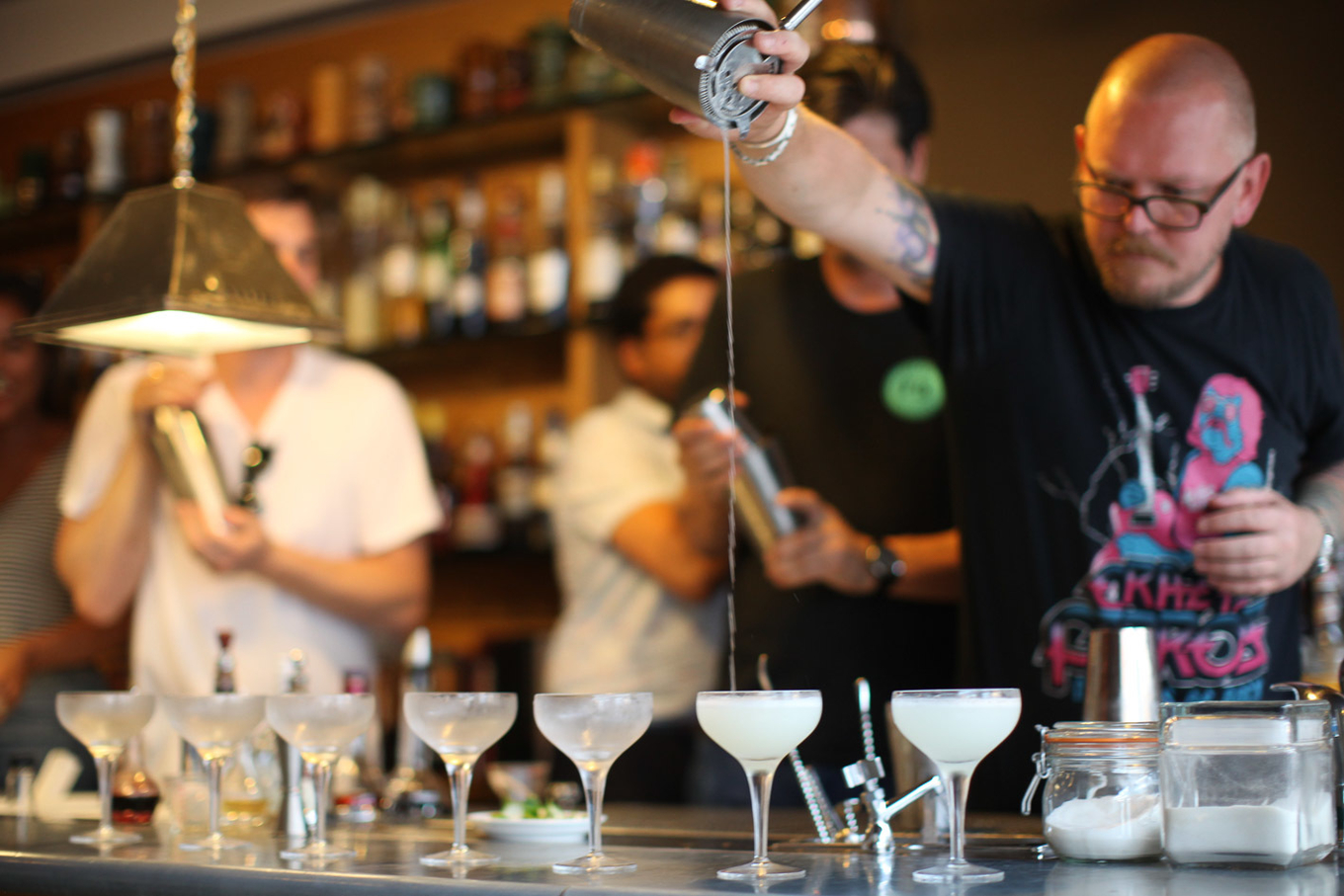 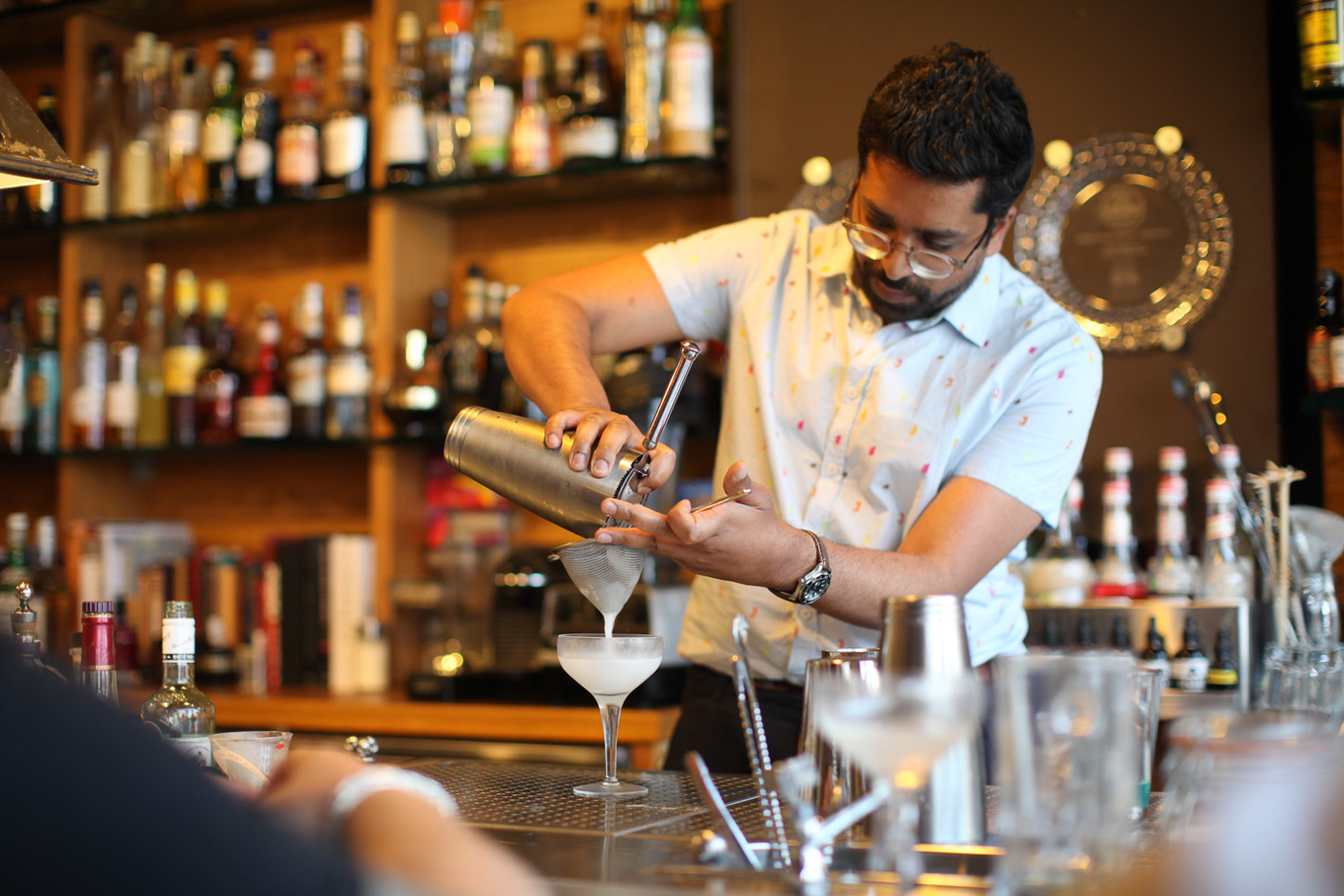 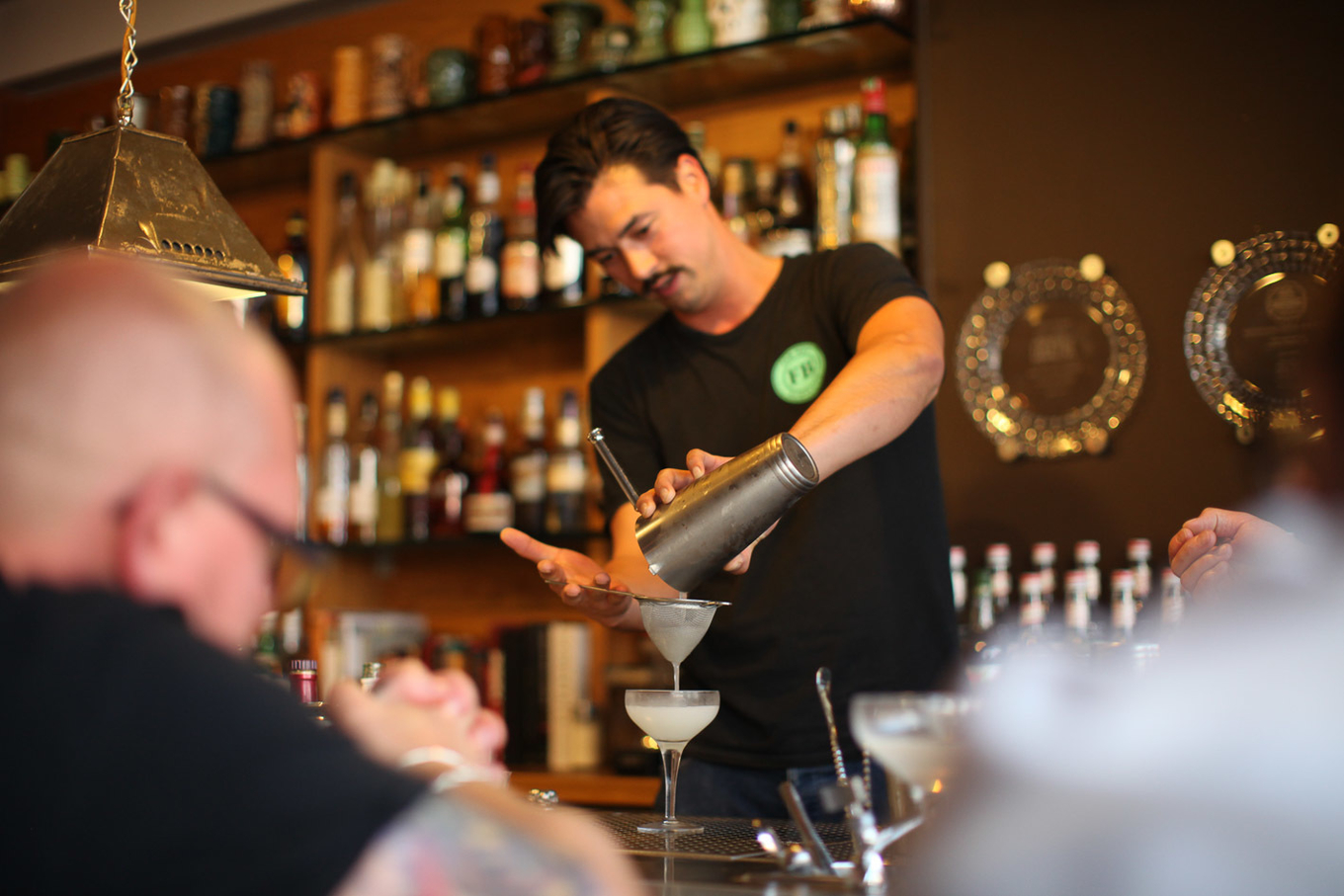 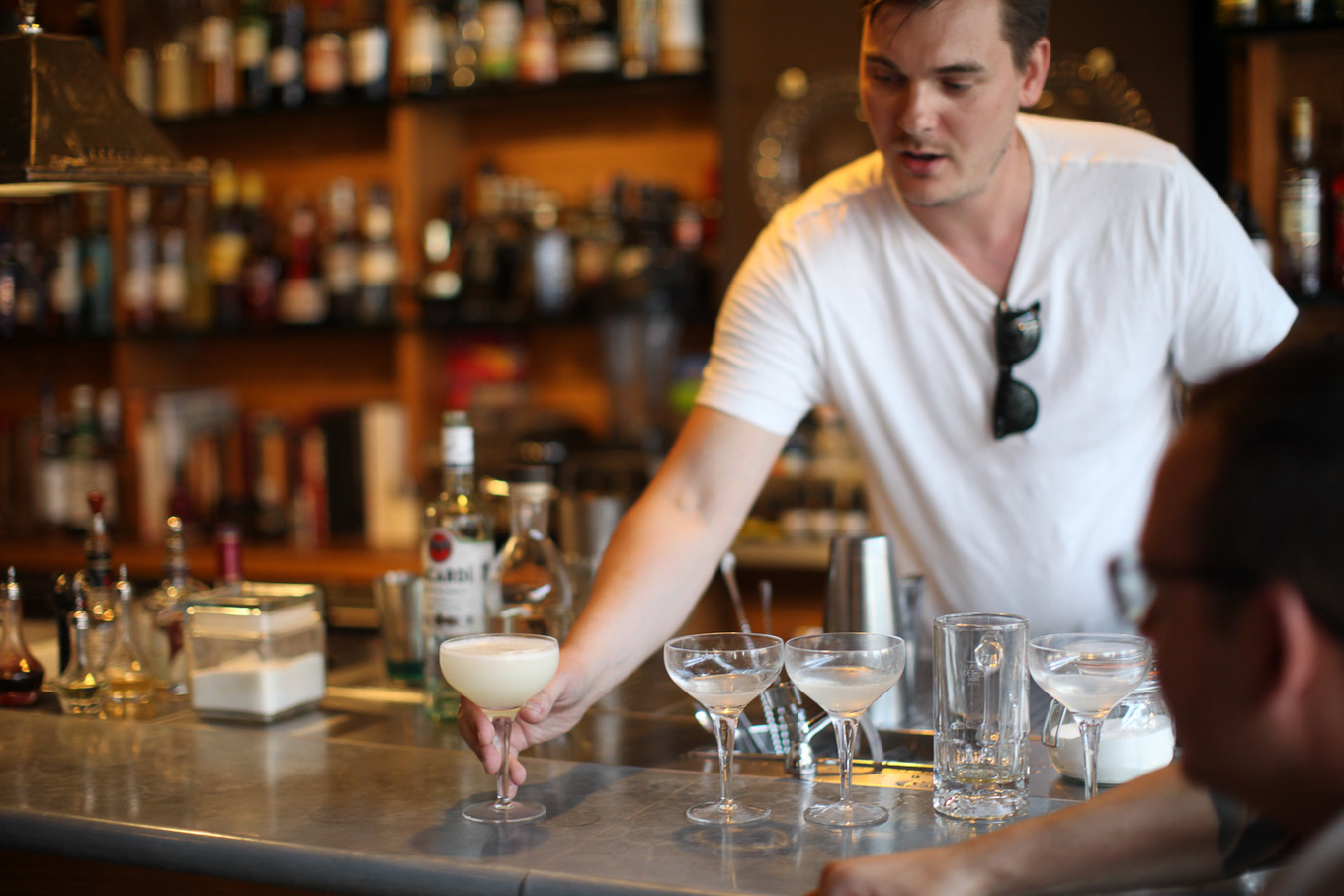