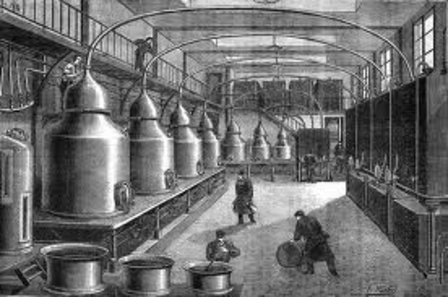 The origin of absinthe's name, like its origin itself is both unclear and a matter of conjecture but it's thought to derive from the Greek word 'apsinthion' meaning either 'wormwood' or 'undrinkable' (presumably due to its bitter taste).

Earliest origins date back to ancient Egypt and medicinal use of wormwood is mentioned in Ebers Papyrus, circa 1550 BC. The ancient Greeks used wormwood extracts and wine-soaked wormwood leaves as remedies and there is also evidence of the existence of a wormwood-flavoured wine around this time made by Hippocrates that was handed down as a cure for digestive and flatulence disorders.

Modern-day absinthe originated around the time of the French Revolution (1789-1799) when thousands of French loyalists sought safety through exile in Switzerland, Alsace, and other nearby countries. One such elderly émigré was Dr Pierre Ordinaire, a retired French physician who fled to Switzerland and settled in the town of Couvet. Thus far the story is well substantiated.

According to popular legend (and Pernod-Ricard's marketing bumph), Dr Ordinaire started work on creating a new elixir drink using plant extracts, in particularly wormwood, long considered to have medicinal properties. He sought to make a tonic which made ingestion of the bitter herb more palatable and, in 1792, the good doctor utilised distillation to arrive at his final formula involving the maceration of fifteen botanicals in grape spirit. These included wormwood bark, star anise, liquorice, fennel, hyssop, parsley, chamomile, spinach and coriander, but he called the drink Extrait d'Absinthe after Artemisia absinthium, the Latin name for wormwood.

On his death, Dr Ordinaire left the recipe for the drink and a substantial sum of money to his trusty housekeepers, the Henriod sisters. They made small batches of his potion and started hawking it as Dr Ordinaire's Absinthe. The doctor's tipple attracted the interest of another French expatriate and lace merchant, Major Daniel-Henri Dubied. After trying the drink Dubied made an offer to the Henriod sisters for both the recipe and their business.

A Swiss version of this legend, supported by a 1769 Neuchatel newspaper advertisement for 'Bon Extract d'Absinthe', suggests that the Henriod sisters were making absinthe long before Dr Ordinaire's arrival in the village. Although there is also evidence to show that the doctor not only existed but actually sold absinthe. Some reports say this was only after his stealing the recipe from the Henriod sisters.

Whoever its true originator, the village of Couvet in Switzerland's Val-de-Travers region is indisputably absinthe's spiritual home. And it appears that commercial absinthe distillation for use as a beverage rather than an elixir was started there sometime around 1794 by one Abram-Louis Perrenoud.

Thankfully it is undisputed that it was Major Dubied who commercialised absinthe. In 1797 his daughter, Emilie married Abram-Louis Perrenoud's son, Henri-Louis. That same year Dubied acquired the formula from Abram-Louis (or possibly the Henriod sisters) and employed his son-in-law, Henri-Louis, as he had learnt the art of distillation from his father. In 1798, they started distilling their own absinthe with Dubied's own sons, Marcelin and Constant, also involved in the business which they named Dubied Père et Fils. 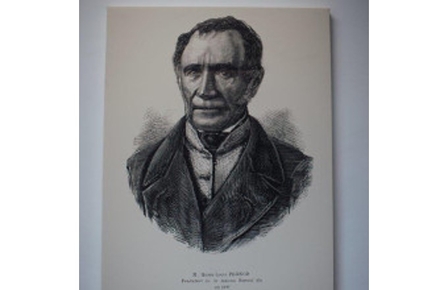 In 1805 Henri-Louis changed his name from Perrenoud to Pernod and established his own absinthe manufacturing company called Pernod Fils, just across the border in the French town of Pontarlier. This was chiefly to avoid paying taxes at the French border.

Sales of absinthe grew rapidly as French society welcomed the addition of this new drink to the limited choices of bitter quinine tonic wines (quinquinas) available on café menus. The popularity of absinthe was helped by French army doctors prescribing it to soldiers in the 1840s Algerian Campaign to prevent fevers, malaria, and dysentery, caused by the extreme North African environment.

Later in the 19th century, the phylloxera plagues beginning in 1862 and lasting through the 1880s decimated European vineyards leaving the wine and brandy industries on their knees. Cheap and easily obtainable absinthe was an obvious alternative. Its sales boomed in the Parisian cafes frequented by Bohemian luminaries such as Van Gogh, Degas, Toulouse-Lautrec, and Picasso who were inspired by its 'mind-altering' effects - alcohol can do that to a man.