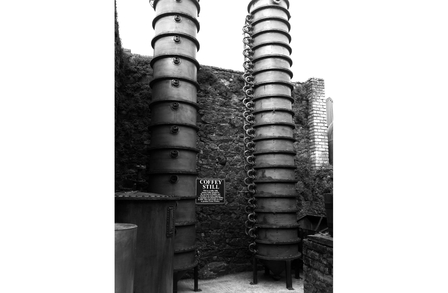 The beginning of the 19th century saw attempts to develop a still to speed and improve the distilling process and 1826 Robert Stein invented a still consisting of two columns. An Irishman and patent office cleric, Aeneas Coffey considerably improved the design and patented his 'Coffey' still in 1831.

Column stills are also known as 'continuous stills' because, as its name suggests, they can be run continuously without the need to stop and start between batches as in pot stills (aka: alembic stills). This coupled with the higher concentration of alcohol in the final distillate makes column stills much more economical to operate than pot stills.

The Coffey still enabled distillers to produce a much purer spirit, and on a larger scale than was previously possible and by the middle of the 19th century the quality of gin produced using clean spirits from the new continuous stills was close to the standard to spirit we enjoy today and distillers reduced or omitted the sugar previously used to soften the harshness of the old style gins.

This new style of gin eventually became known as dry gin, then London Dry Gin. The first London dry gins were more aromatic than is typical of today's style.

During the 19th century Sir Felix Booth set up another distillery at Brentford and grew Booth's Distillers into the largest distilling company in England. In 1829-33 he financed John Ross's expedition to chart the North West Passage: Ross failed to do this but did succeed in locating the true position of the magnetic North, and named some newly discovered areas after his patron, notably Boothia Peninsula in Canada.

King William IV gave the Royal Arms to Booth's distillery in 1833 and from then on the gin was sold under the strap line 'King of gins'. 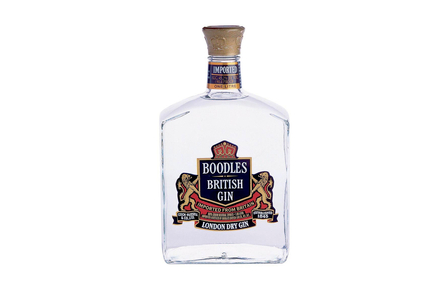 This old British brand of gin dates back to 1847 but is now only sold in the United Sates. The brand is named after Boodle's gentlemen's club in St. James's, London, founded in 1762 and originally run by Edward Boodle. Unusually Boodles Gin (without the apostrophe) contains no citrus botanicals.

In 1850, Sir Felix Booth of the Booth distilling family succeeded in pushing a private Members Bill through the British Parliament which removed duties on export gin. London's distillers were quick to seize the opportunity and pushed their new quality dry gin style to new markets.

Quinine, extracted from the pungent bark of the South American cinchona tree, gives tonic its distinctive bitterness. It was first used to treat malaria in Rome in 1631 and the first known quinine-based tonic was launched by Erasmus Bond in 1858. Tonic was very popular in British colonies, especially India so when Schweppes launched their first carbonated quinine tonic in 1870, they branded it 'Indian Tonic Water'. The ladies and gentlemen of the Raj also drank phenomenal quantities of gin. It is therefore accepted that gin and tonic emerged in India during the second half of the nineteenth century and was drunk partly for its anti-malarial properties.

London Dry Gin was the preferred tipple of officers on board ship, and gentlemen of the Raj, mixed with medicinal flavourings such as tonic (Gin & Tonic) or bitters (Pink Gin). Gin and soda, garnished with lemon, was known as 'the British soldier's delight' while gin and ginger beer was called 'Hatfield'.

Phylloxera Vastatrix, a louse that attacks the roots of grape vines eventually causing the death of the plant, was discovered in French vineyards in 1863. Phylloxera devastated 90% of Frances vines and quickly spread through much of Europe.

This crippled the European wine, and also the brandy industry, for over a decade. American grapes, where the pest originated from, were found resistant to the creature so European vines were grafted to American rootstock so making the new hybrid vines resistant to Phylloxera attack. Although this solved the problem in the intervening years, sales of gin greatly benefited.

The Fleischmann Brothers establish their distillery in Ohio in 1870 and produce the first American dry (unsweetened) gin. 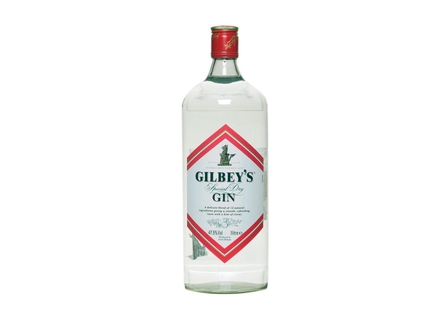 In 1857 Walter and Alfred Gilbey returned from service in the Crimean War and set up a wine importing business in London's Soho. Trade grew so much that by 1867 they had moved to the famous Pantheon building on Oxford Street - five years later they set up a gin distillery in Camden Town.

Business boomed and the Gilbey family acquired several whisky distilleries in Scotland as well as foreign concerns such as Crofts port: by the 1920s the company had gin distilleries in Australia and Canada.

During Prohibition, consignments of Gilbey's gin were shipped to just outside the legal twelve-mile limit off the American coast then smuggled into the States. As a result, Gilbey's was widely counterfeited by the US underworld: the company introduced distinctive square bottles with sandblasting on three sides in an attempt to protect its intellectual property, only reverting to the original clear glass style in 1975. By this time, it had distilleries in New Zealand, Uruguay, Namibia, East Africa, Swaziland, Mauritius and Mozambique.

The dragon-like creature featured on Gilbey's label is a Wyvern, a mythical winged animal often seen in medieval heraldry. 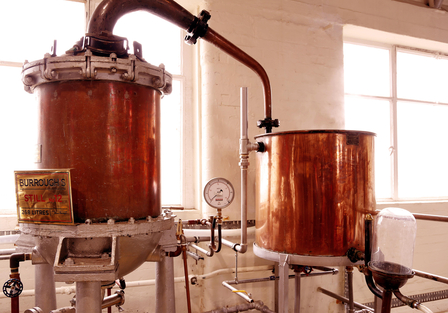 It is often claimed that the Seagram family crest on the gin's label dates back to 1857 and this date features prominently on the packaging. A claim substantiated by the founding of a whiskey distillery in Waterloo, Ontario, Canada that year. However, gin was not distilled there at this time and Joseph E. Seagram did not become a partner until 1869, and only assumed sole ownership in 1883: this was when the company became known as Joseph E. Seagram & Sons. Joseph died in 1928 and a few years later the Distillers Corporation, founded by Samuel Bronfman, acquired Joseph E. Seagram & Sons, and took over the Seagram name.

When Seagram's Gin first launched it was named 'Seagram's Ancient Bottle Distilled Dry Gin' and the bottle was embossed with seashells and starfish. Although successive marketers have modernised the bottle, the bumpy surface remains a trademark: so much so that someone came up with the strap line "The smooth gin in the bumpy bottle". Bizarrely, 'The Perfect Gin' logo which graces the shoulder of the bottle bears a scary resemblance to the Salvation Army's logo.

Gin was originally sold in casks or earthenware crocks of the type still used for some jenevers today. Bols then developed an elongated heart-shaped green glass bottle which was widely copied by other Dutch jenever distillers and English gin distillers. It was not until the 1890's that improvements in glass technology allowed production of the first clear glass bottles showing the clarity of the liquid inside. Following this development, in 1907, The distinctive clear bottle and yellow Gordon's export guise was first created in celebration of a large, prestigious Australian export order placed in 1907. Prior to this, Gordon's green livery had remained effectively unchanged.

Originally a brewery, distillation started at Langley Green (near Birmingham) in 1902 as a result of the Victorian gin boom when local publicans clubbed together to purchase the brewery and install stills.

This distillery is now owned by W H Palmer Group, a family owned company whose main activity is not distillation but chemical compounding and wholesale. Indeed the group only began distilling when they took over these premises and its dormant gin distillery in 1955.

In America, the combination of a spirits-based drinking culture where men often worked away from home for months at a time did not please the campaigning Women's Christian Temperance Union. Saloons offered free lunches, which could lure in the unsuspecting worker to spend his wages on booze rather than feeding the family, and functioned as a Mecca for violence and prostitution. In an attempt to cure the nation's growing drink problem, American senators signed the Volstead Act, prohibiting recreational consumption of any beverage stronger than 0.5% alcohol by volume.

In 1919, America embarked on 'the noble experiment', and those distilleries which could not switch to production of 'medicinal' alcohols shut down.

Americans turned for booze and entertainment to the wonderful world of the speakeasy, beautifully designed venues which combined, bar restaurant and club in one. Although firmly illegal - and often shut down - these places drew women as well as men, unlike the old saloons which had been, but for the odd hooker, all-male haunts. These underground venues were often decorated far more luxuriously than their legal predecessors, and featured elaborate systems to conceal all signs of boozing within seconds of the alarm being raised.

Although the better speakeasies used quality gin and other smuggled spirits, there was plenty of toxic home-made hooch around. As well as illicit stills, industrial alcohol such as antifreeze was denatured to remove poisons from the ethyl alcohol. If the purification process was not handled by a skilled chemist the results could be deadly and this is where the phrase 'to die for' originates.

This is the period when 'Bathtub gin', made by mixing 'purified' industrial alcohol with juniper oil and glycerine originated. The term could be due to old bath tubs being used for the mixing process or some say because the vessels it was made in were usually so tall that the only tap they would fit under was that of the bath tub.

Perversely, Prohibition proved to be good news for British distillers as thirsty American's were prepared to pay dearly for English gin which they recognised as being a premium product, the 'Real McCoy'. English distillers sent regular shipments to islands in the West Indies and Canada, the favoured routes for the smugglers.

When Prohibition was finally repealed on 5th December 1933, demand for London dry gin was many times what it had been at the beginning of Prohibition. Post Prohibition it boomed. In a world mired in first depression then world war, gin and cocktails became synonymous with glamour.

When Prohibition was repealed in 1933, Gordon's owners, Tanqueray Gordon, established a huge distillery and bottling plant in New Jersey. Another followed in Illinois in 1965 and a third hit California in 1971. The campaign to produce and sell large volumes of Gordon's in the lucrative US market is continued by owners Diageo to this day.

In the second half of the 19th century unsweetened or 'dry' gin grew in popularity, partly led by the growing fashion for dry champagne at the time. Old Tom gin had gradually become lighter in style as the quality of the base spirit had improved thanks to inventions in distilling technology and sugar had replaced more flavoursome botanicals such as liquorice previously used to sweeten the gin. The new dry gins were even lighter in style with little or no added sugar and much closer in style to what we know as 'London dry gins' today.

During the 20th century Old Tom gin which had typically contained between two and six per cent sugar practically died out with what little continued to be made in England mainly exported to Finland, Japan and parts of the USA. In response to this trend Tanqueray introduced the name 'Special Dry' to its brand in 1950.

The Coronation of Queen Elizabeth II on 2 June 1953 heralded a new start for a Britain that had finally put the war behind it with petrol rationing finally ending that same year. Britain was also celebrating Sir Edmund Hillary successfully reaching the summit of Mount Everest.

The new found feeling of prosperity helped gin sales in Britain and the fact that the coronation was televised also drove record sales of televisions. In America sales of gin also soared as the coronation drove a craze for all things British.