Gin is usually sold at between 35 and 47% alc./vol., with the lower end of this spectrum mainly affected by the prevailing laws in particular markets. Many gin brands also have a higher strength bottling, often termed Navy Strength, aimed at the duty-free market and these are typically the high forties to 50% alc./vol..

The European Union regulations governing gin are the most wide-ranging.

On 20th February 2008, a EU definition recognising and legislating what can be termed a 'gin' passed into EU law as part of the revised EU Spirit Drink Regulations. According to this legislation all gins must be:
1. Made with suitable ethyl alcohol flavoured with juniper berries (juniperus communis) and other flavourings.
2. The ethyl alcohol used must be distilled to the minimum standards stated in the EU Spirit Drink Regulations.
3. The predominant flavour must be juniper.
4. Water may be added to reduce the strength but the gin must have a minimum retail strength of 37.5% alc./vol..
5. Further ethyl alcohol of the same composition used in the distillation may be added after any distillation.

Distilled gin
1. Must be made in a traditional still by redistilling neutral alcohol in the presence of natural flavourings but there is no minimum strength stipulated for the resulting distillate.
2. Additional flavourings, sweeteners and other approved additives may be added after distillation and these can be natural or artificial.
3. Approved colourings may be used to colour distilled gin.

London Gin
1. Must be made in a traditional still by re-distilling ethyl alcohol in the presence of all-natural flavourings used.
2. The ethyl alcohol used to distil London Gin must be of a higher quality than the standard laid down for ethyl alcohol. The methanol level in the ethyl alcohol must not exceed a maximum of 5 grams per hectolitre of 100% vol. alcohol.
3. The flavourings used must all be approved natural flavourings and they must impart their flavour during the distillation process.
4. The use of artificial flavourings is not permitted.
5. The resultant distillate must have a minimum strength of 70% alc./vol..
6. No flavourings can be added after distillation.
7. A small amount of sweetening may be added after distillation, but apart from water, no other substance may be added. A 3rd February 2014 amendment to the original rules (which stipulated that sugars must not exceed 0.5 grams/litre of finished product) "provides for the possibility to use the term 'dry' for the category of spirit drink 'London gin'. That spirit drink is not allowed to contain added sweetening exceeding 0,1 gram of sugars per litre. For the categories of spirit drinks 'gin' and 'distilled gin' there is no established limit for the addition of sweetening. However, when 'gin' and 'distilled gin' are produced without sugar or with a sugar content not exceeding 0,1 gram per litre, the possibility to use the term 'dry' should be extended to those spirit drinks as defined in that Annex." So there you have it, according to the EU a dry gin can have added sugar and this addition does not need to be declared in the label.
8. London Gin cannot be coloured.

In the USA the Code of Federal Regulations '27 CFR Part 5 § 5.22 under the heading 'The standards of identity', part C has the following definition:

"Gin" is a product obtained by original distillation from mash, or by redistillation of distilled spirits, or by mixing neutral spirits, with or over juniper berries and other aromatics, or with or over extracts derived from infusions, percolations, or maceration of such materials, and includes mixtures of gin and neutral spirits. It shall derive its main characteristic flavor from juniper berries and be bottled at not less than 80° proof. Gin produced exclusively by original distillation or by redistillation may be further designated as "distilled". "Dry gin" (London dry gin), "Geneva gin" (Hollands gin), and "Old Tom gin" (Tom gin) are types of gin known under such designations. 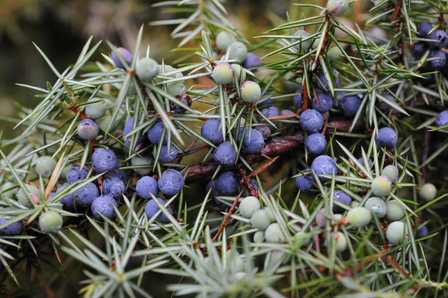