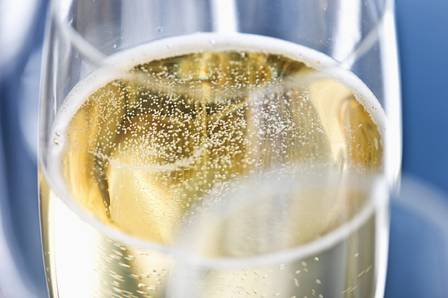 The way most people pour champagne is wrong. As are the glasses we drink it from. Think you know about champagne? Think again.

"Come quickly - I am drinking the stars," Dom Pierre Pérignon is reputed to have said when 'discovering' the first sparkling champagne. Whether he actually said those words is another story, but the sentiment, which appeared in an advert from the late-1800s, carries through to today: champagne and its bubbles continue to captivate.

Those bubbles are crucial to the enjoyment and experience of champagne. If you've ever left a glass for too long and tasted it flat you'll understand that without the persistent effervescence all the important elements of champagne - its flavour, aroma and, of course, that gentle fizz across the tongue - are completely destroyed.

And the role of bubbles in champagne has become the life's work of one man. It was on a sunny day in France in 1999 when Gérard Liger-Belair stumbled into bubbles in a big way. He was watching his glass of beer beer, on the table in front of him, and observed how it was gently releasing golden bubbles which rose lazily to the surface. Amazed by the structure that the naked eye could see, Gérard, at the time a student physicist and amateur photographer, decided on a whim to pursue the science of bubbles.

After initially approaching the subject independently, he later approached soft drinks and champagne houses with the early results of his research and a proposal for future study. He was surprised to discover research of this kind had never been undertaken before. Moët & Chandon jumped at the chance to understand more about the micro-mechanics of their CO2 bubbles and so, after graduating, Gérard left for the ancient city of Reims, de facto capital of the Champagne region. It is at Reims University, for the last 15 years, where he has studied and photographed champagne's effervescence.

The science behind bubbles

There's enough CO2 dissolved in an average bottle of champagne to generate some 20 million bubbles. In total, following secondary fermentation, about 9g of CO2 becomes dissolved in a bottle of champagne. Most of this escapes when the cork pops off, meaning it can burst off at an extraordinary speed - up to 30mph - because the amount of gas contained within is equivalent to five to six times the bottle's 'normal' atmospheric volume of CO2.

Fact one: as much as 80% of CO2 can be lost when you release the cork. So forget about brash, look-at-me displays of corks flying across the bars, and don't even think about a racing driver's end-of-race celebration, unless you're a racing driver and have just won Formula 1. Instead, aim to maximise the amount of CO2 retained in the liquid by easing off the cork, minimising the rush of CO2. Pouring into a tilted glass also helps. "Once in the glass champagne gives off only about 20% of its dissolved CO2 in bubbles - for every single bubble that develops four have already escape in the air," says Gérard.

Bubbles form on microscopic particles (technically cellulose fibres - which can include skin or hair molecules from the air, fibres from a tea towel used to dry the glass and other dirt) which stick to the surfaces of a glass. As champagne is poured in, gas builds up in the fibres until the surface tension, pressure and viscosity are all just right and the fibre starts 'leaking' bubbles. Bubbles can also form in tiny imperfections on the glass itself, where again gas builds up as it tries to escape the liquid until it forms a bubble big enough to rise to the surface.

Fact two: Gérard and his team have discovered that bubbles can emerge at a rate of 400 per second for an average glass, compared to beer which effervesces at 150 bubbles per second. Swelling to slightly less than a millimetre in diameter the bubbles also absorb other chemicals in the champagne as they rise. Due to the flexibility of champagne bubbles, (more so than in beer), the bubbles linger on the surface for longer before popping.

Fact three: as they burst, a bubble will violently eject tiny droplets of concentrated champagne into the air, enhancing the aromas, and therefore the flavour, of the wine. "I wanted to capture the carbonation from each nucleation on the glass wall, to its bursting at the liquid surface," says Gérard, who has taken high-resolution, slow motion images of this phenomenon occurring. His pictures show droplets rising clean out of the water before bursting - like liquid land mines - and creating miniscule ripples across the surface of the wine.

Despite this observation, Gérard remains unsure why champagne bubbles stop forming at a particular point - beyond the obvious point that the dissolved CO2 has dissipated in the air. "Sometimes champagne will show very long-lasting bubbles and sometimes not. What we're not yet sure of why they die away: it might be a combination of temperature, viscosity or grape variety."

What's your preference? Tall, elegant flute, the longer the stem the better? Or shallow bowl modelled on Marie-Antoinette's breast?

Fact four: they're both wrong. According to Gérard, we'd be better off drinking champagne in from something more akin to a wine glass than a flute or a coupe. The problem with both these shapes is they don't allow the bubbles to work their magic properly, he says.

As they rise to the top, bubbles induce flow patterns inside the champagne, effectively stirring the liquid and changing the taste. In a flute, however, while the bubbles mix the liquid more completely than a coupe, the narrow aperture highly concentrates the CO2 and irritates the nose. We have pain receptors for high levels of CO2 and the bubbles popping out of a flute will active these in our nose and mouths, thus affecting the aromas and taste.

A coupe, on the other hand, will dilute the effect of the CO2 on the nose, but will also minimise the bubbles' ability to bring flavours and scents to the surface.

A trend is underway for sommeliers to serve champagne in conventional wine glasses but Gérard is trying to design the perfect champagne glass that matches the perfect vessel for the creation of bubbles but that still shouts 'celebration'.

Bigger is not always better

Fact five: Traditionally bubbles were prized for their large size but nowadays you've probably been told if a champagne has smaller bubbles it's better. "Champagne with its foaming whirls; As white as Cleopatra's pearls," Byron once wrote. Neither is necessarily true says Gérard - though if you're curious, flutes produce larger bubbles than coupes due to the sheer liquid weight: the smaller the liquid level in the glass, the smaller the bubbles.

The trend is out there though and champagne producers seem eager to give us smaller and smaller bubbles. As size is determined by dissolved CO2, the less sugar producers will add during the second fermentation and the smaller the bubbles will be - which also contributes to drier and drier taste profiles. (Older champagne will also have smaller bubbles as there is less dissolved CO2 and the cork will have let out a small amount of gas - Gérard has been working on understanding the relationship between cork and bubbles, which is important because oxygen finds its way in and modifies the aroma of the wine within).

fact six: while big bubbles aren't necessarily a good thing, a big bottle is. The team at Reims has found that bubbles are better conserved in magnums (1.5 litres) rather than a standard 750ml bottle. This is because of the volume of CO2 dissolved in the larger volume of liquid and the quantity of CO2 that can escape the cork, which is likely to be the same size as a standard bottle.

So the moral of our story and our guide to better bubbles - pour from a magnum of champagne into a tilted wine glass.