Described by Rudyard Kipling as being "Compounded of the shavings of cherub's wings", the Pisco Punch was created in or en route to San Francisco. The cocktail was made famous at the city's legendary Bank Exchange bar where the recipe was a closely guarded secret - to the extent that all we really know for sure is that it was made with pisco. However, many recipes and stories of the drink regale.

This exquisite drinks creation is usually credited to Professor Jerry Burns of San Francisco's Bank Exchange. However, its origin could lie in the late 1800s, when the drink was served aboard steamships stopping in Peru, Puerto Vallarta, Mexico and San Diego en route to San Francisco and its golden economy. Those same ships ensured a plentiful supply of lemons, pineapples and the all-important pisco needed for San Francisco's bartenders to produce Pisco Punch cocktails.

The Bank Exchange Billiard Saloon was on the ground floor on the southwest corner of the Montgomery Block, on the corner of Montgomery and Washington Streets, San Francisco, near where the Transamerica Pyramid now stands. The bar opened in 1853 and survived the earthquake and fire of 1906. For over 50 years its popularity never waned and only Prohibition brought about its sad unjust demise in 1919. 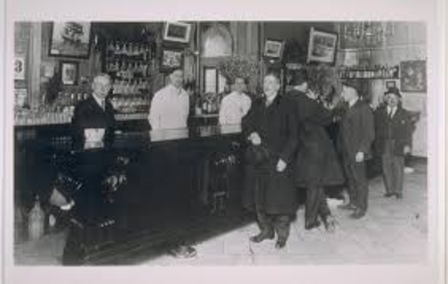 Resplendent in marble and mahogany, and lit by magnificent crystal chandeliers, the Bank Exchange was lavishly appointed and the main attraction in the city's most important building. Duncan Nicol, the last proprietor built a separate lounge for women, making it the first lounge in the American West where 'non-working' women could drink unimpeded as equals to the men. The Bank Exchange and its legendary Pisco Punch were enjoyed by the rich and famous.

Much of the Bank Exchange's notoriety was due to the Pisco Punch, so much so that the establishment gained the nickname 'Pisco John's'. Due to the bar's nickname, John Torrence, one of its early owners, is credited with the creation of the Pisco Punch but the last owner, Duncan Nicol (or Nichol, or Nichols) is also often identified with the drink's creation. In his 2007 book, Wings of Cherubs, Guillermo Toro-Lira surmises that Duncan Nicol was in fact 'Pisco John' and he was so nicknamed after his telephone number. The 1903 San Francisco telephone directory lists the first part telephone numbers as words and the number for both John Nichol and the Bank Exchange as 'John 3246' 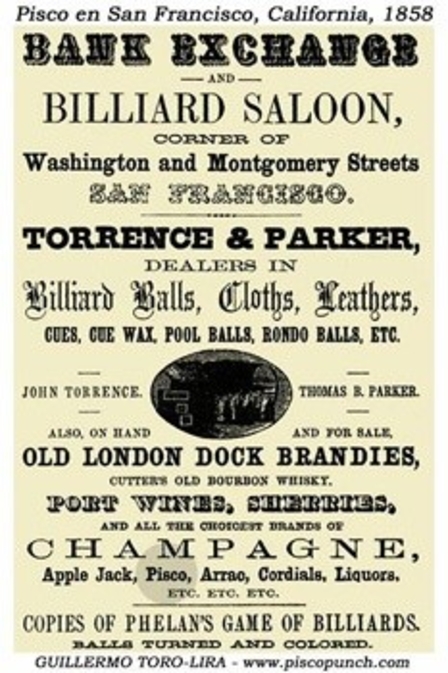 Mark Twain drank at the Bank Exchange with a flamboyant fireman named Tom Sawyer whom he'd acquainted while working as a reporter at the San Francisco Call. The stories that Tom Sawyer recounted at the bar inspired the literary 'Adventures' for the Tom Sawyer character in Twain's books.

After drinking at the Bank Exchange, Rudyard Kipling immortalised Pisco Punch in his 1889 From Sea to Sea as being "compounded of the shavings of cherub's wings, the glory of a tropical dawn, the red clouds of sunset and the fragments of lost epics by dead masters".

In 1937, Harold Ross, founder of The New Yorker magazine, wrote "In the old days in San Francisco there was a famous drink called Pisco Punch, made from Pisco, a Peruvian brandy... pisco punch used to taste like lemonade but had a kick like vodka, or worse."

It is said that the Bank Exchange's Pisco Punch recipe was handed down from one owner to the next in absolute secrecy. Duncan Nicol, the Scottish immigrant who co-owned/owned the bar outright for a total of 32 years (1887 to 1919), either inherited the precious recipe from the previous owner, George Brown, or created the recipe himself - we'll probably never know for sure.

Whether or not Duncan Nicol was the originator of the Pisco Punch, it appears he was very secretive over the precious recipe, preparing batches of a gum arabic, sugar and pineapple pre-mix in the basement so that neither his patrons or staff could discover the exact recipe. Nicol died in 1926 at the age of 72, presumably taking the recipe with him.

Like so many classic cocktails, the original Pisco Punch recipe is lost to time and Duncan Nicol's grave, so is the subject of much drink historian's conjecture. However, where there's drink involved secrets tend to be divulged.

John Lannes was the manager of the Bank Exchange in its latter years and in 1919 took over ownership of the bar from Duncan Nicol, only to find the Prohibition was to force its closure the next year. In 1964, a William Bronson discovered John Lannes' Pisco Punch recipe in a letter written by a lawyer in 1941, and in 1973 Bronson published the recipe in the California History Society Quarterly:

1. Cut a ripe pineapple into 1 inch squares and place in bowl of gum syrup to soak overnight. This both flavours the gum syrup and when strained, produces sugar coated pineapple cubes with which to garnish each glass of Pisco Punch.

However, in the recipe above Lannes omits a secret ingredient, perhaps in deference to Nicol or perhaps because Nicol never revealed it to him. Back in 2003, I adapted Lannes' recipe to produce a simple but refreshing Pisco Punch. 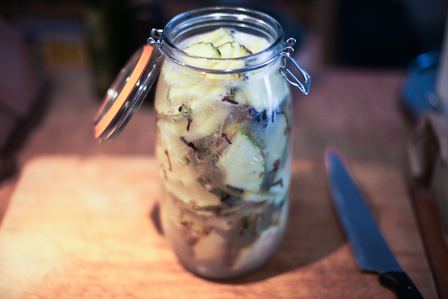 John Lannes recipe and most modern interpretations of the Pisco Punch use a pineapple and gomme arabic marinade in place of sugar syrup. To make the marinade:
1. Cut the leafy head off your pineapple.
2. Thoroughly clean pineapple under hot water.
3. Core and remove the rind.
4. Cut the pineapple into inch (25mm) thick rings and then into cubes.
5. Place cubes in deep container, cover with gomme arabic and seal.
6. Leave marinade for 24 hours turning occasionally.
7. Strain, bottle the syrup and set aside the pineapple wedges to use as a garnish for your Pisco Punch.

In his book Wings of Cherubs, Guillermo Toro-Lira outlines historical evidence suggesting that the Pisco Punch made by Nicol at the Bank Exchange contained cocaine. The drug was widely available during the late 1800s and was a common ingredient in tonics, not to mention coca cola. Perhaps cocaine was the secret to the drink's lasting appeal - something perhaps supported by quotes referring to the Pisco Punch from the period, such as "it makes a gnat fight an elephant".

Toro-Lira says that "the most popular cocaine laced drink at the time was Vin Mariani (Mariani Wine) first concocted by the Italian Angelo Mariani in France in 1863." Vin Mariani was Bordeaux wine infused with coca leaf.

Duggan McDonnell, the owner of San Francisco's Cantina bar and the Encanto Pisco brand, believes Vin Mariani was the secret ingredient in Nicol's Punch. McDonnell references "the glory of a tropical dawn, the red clouds of sunset" in Rudyard Kipling's famous Pisco Punch quote, pointing out that the quote implies that the drink had a reddish tint. Vin Mariani was red and so would have affected the appearance of the otherwise golden pineapple coloured drink.

Partly due to its cocaine content, Vin Mariani went out of production in the early 20th century, although modern-day reproductions with de-cocainised Peruvian Coca leaf are available. In place of Vin Mariani, McDonnell's Pisco Punch recipe uses Lillet Rouge which contributes much to the flavour and also adds the desired colour of the "red clouds of sunset". 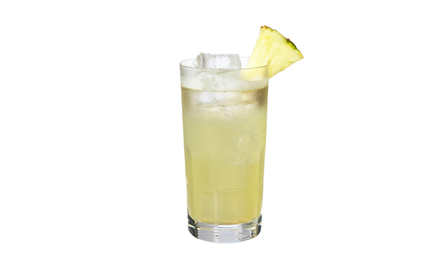 Inspired by Alfredo Micheli's recipe (see below) I believe cloves are the secret to a great Pisco Punch with the aromatic spice combining brilliantly with both pineapple and pisco. Either smash a couple of cloves in the base of your shaker before adding the other ingredients, or add to the marinade above. 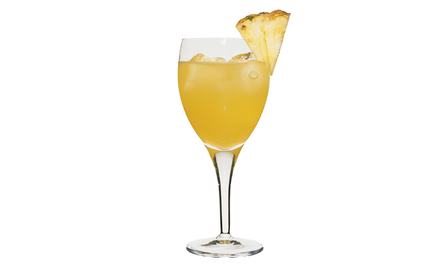 Alfredo Micheli, who went by the nickname Mike, was employed at the Bank Exchange and is said to have spied on Duncan Nichol as he prepared the pre-mixed batch ingredients in the bar's basement. After he believed he'd learnt the secret he left the Bank Exchange to start bartending at a newly opened competitor to the Bank Exchange, Paoli's on Montgomery Street. Alfredo's Pisco Punch recipe relies on a pineapple marinade as described above, but with the addition of clove. 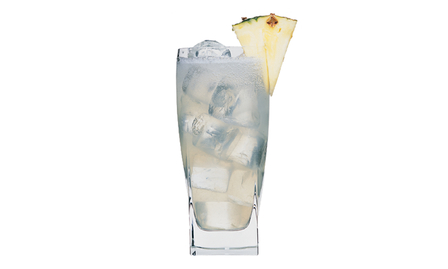 Jack Koeppler, the bartender at the Buena Vista Café in San Francisco who's also famous for being the first bartender in America to serve Irish Coffee, was given a white grape based and absinthe influenced Pisco Punch recipe by the son of its creator, a fellow San Franciscan by the name of Mr Prosser.

In his book 'Wings of Cherubs', Guillermo Toro-Lira examines the Pisco Punch recipe John Lannes gave to Crawford Green in 1941 and concludes that it "reveals a break-up of bartending mixing rules". Toro-Lira re-balances the recipe and due to evidence he has unearthed deduces the original Bank Exchange Pisco Punch recipe used limes and not lemons as is stated in Lannes' recipe. 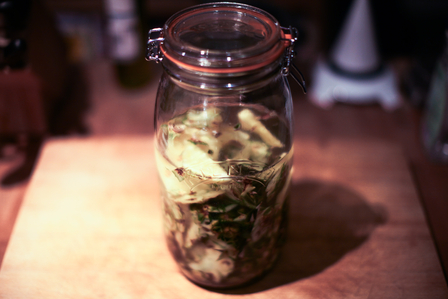 Toro-Lira also says that in order to minimize waste and eke out the most flavour from the expensive pineapples "Nicol may have added a relatively small step during the production of his punch. One which could have further contributed to the punch's renowned smoothness and overall appeal." Many Pisco Punch recipes, including Lannes', stipulate the use of distilled water. Toro-Lira asserts that this is inspired by the Peruvian drink called 'Chicha de piña' which has been prepared since the 1700's by soaking the rind of a clean pineapple for 24 hours in water. He says that "Nicol could have easily prepared the Chicha by soaking the pineapple rind - which was a waste of his punch preparation process - in distilled water and then use this as the water component of the punch."

I'd like to take this opportunity to once again thank Difford's Guide reader, Jon Derr, for sending me Pisco Punch recipes and bringing the drinks history to my attention back in 2003. 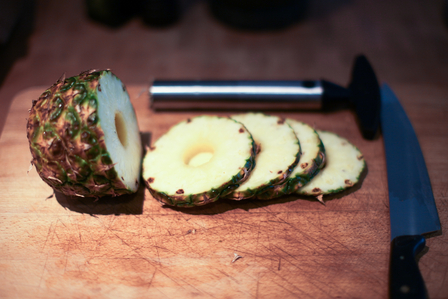 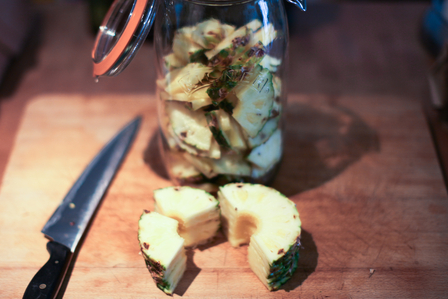 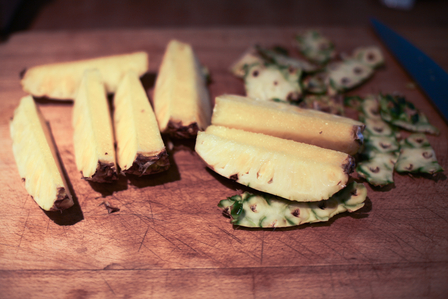 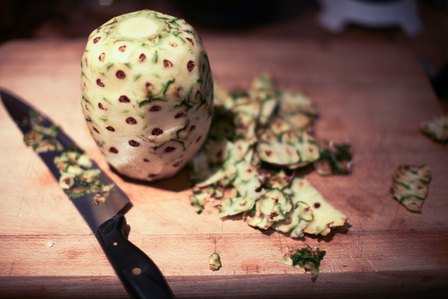 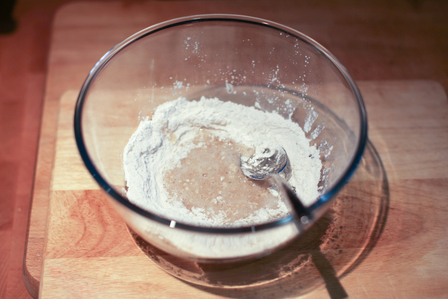 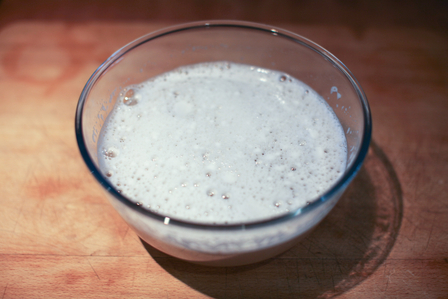 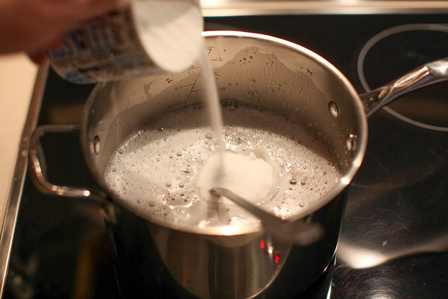 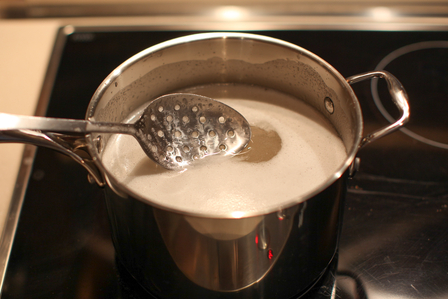 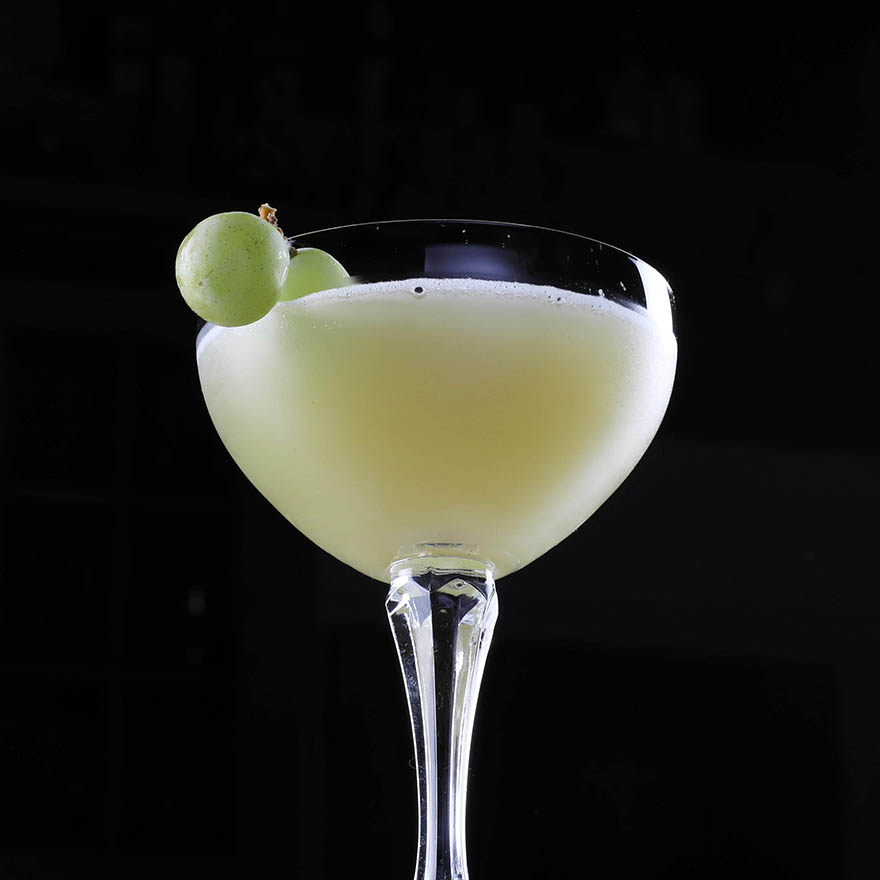 Grape juice and aromatic grape-based spirit paired with pineapple and the merest hint of absinthe. 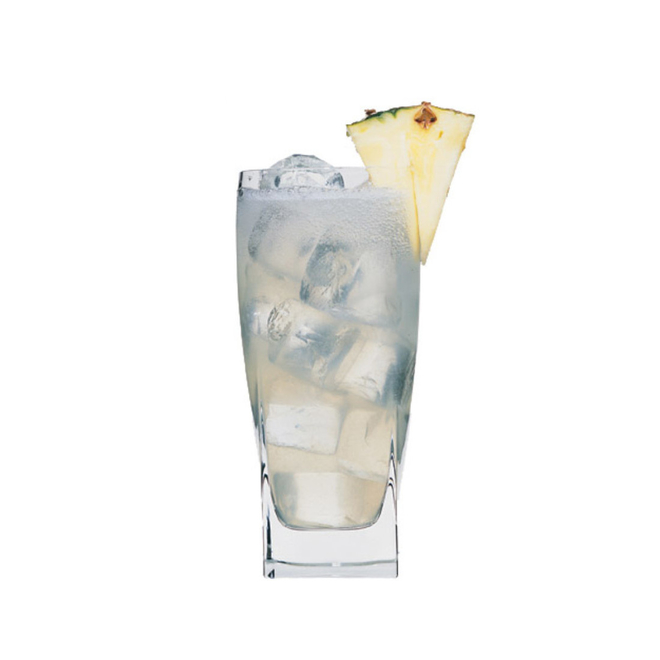 Pisco's character shines through the sweetened pineapple fruit in this long, refreshing classic. 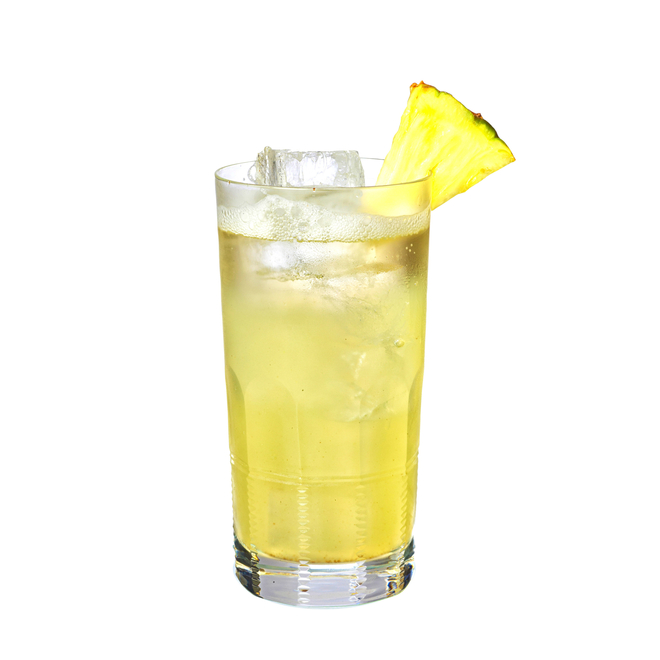 A tangy, balanced combination of rich flavours. The quality of pisco used is crucial to the success of a Pisco Punch. 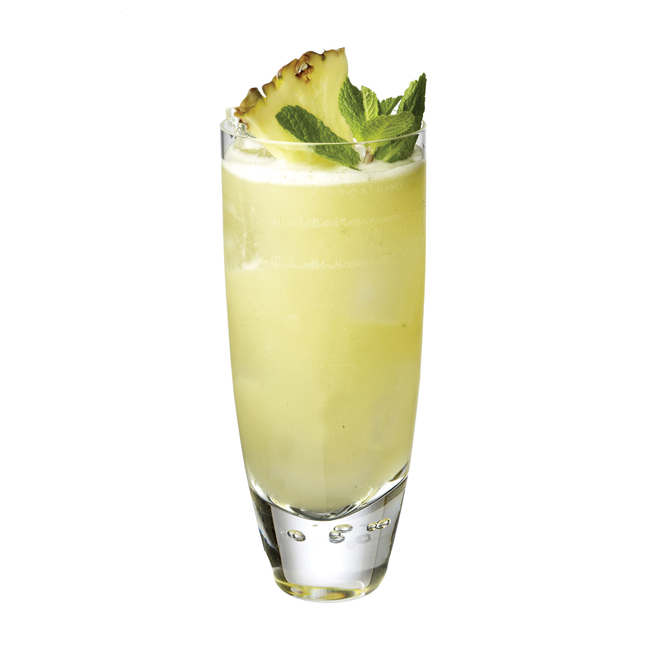 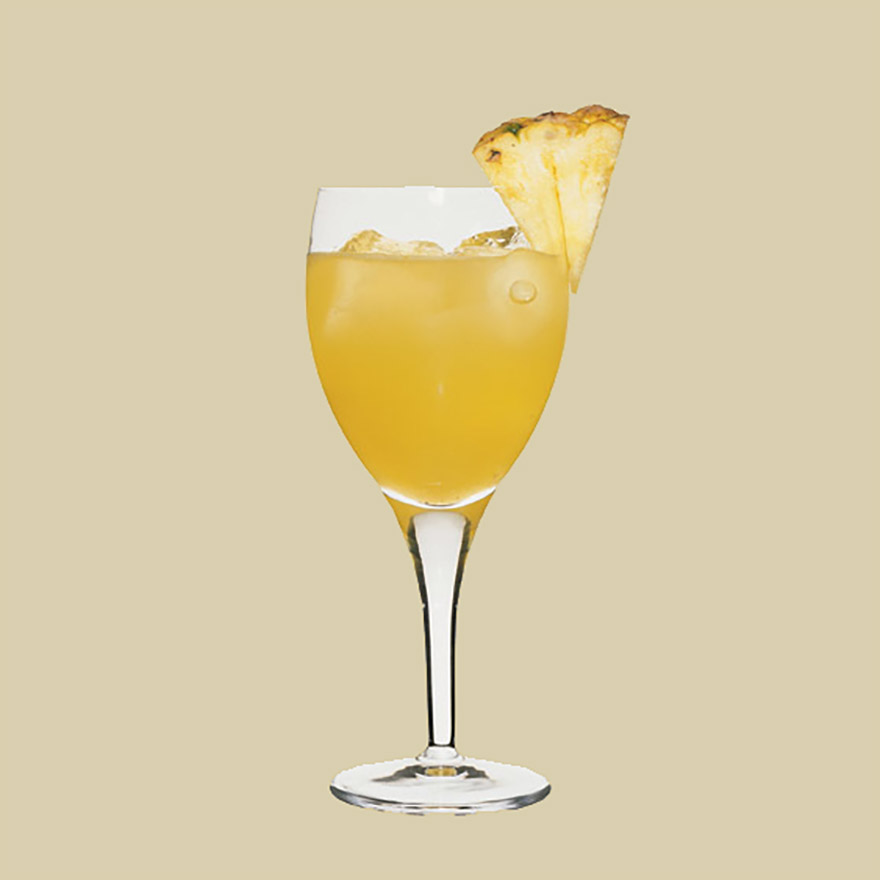 This Pisco Punch is very fruity and slightly on the sweet side but is so tasty that it justifies its legendary reputation.