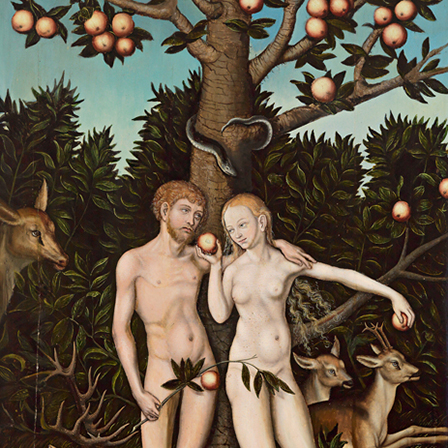 Apple juice, which is one of the most consumed fruit juices on the market and is added to many other types of packaged juice, is made by crushing and pressing apples.

Sweet apples have been in existence for thousands of years so it's likely that humans have made and drunk apple juice for a very long time. We certainly know that the Romans made cider from apple juice, probably by pressing apples in their olive presses so it's most likely that they drank apple juice. 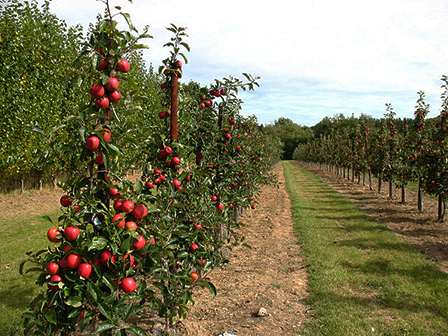 Apples need to be crushed, cut or pounded before pressing because a body of unbroken fruit presents a great resistance to pressure - even hydraulically powered commercial cider presses are fed with finely milled apples. Crushing produces a pomace or mash of a grated consistency.Using traditional methods, the apples are crushed by pounding in a pestle and mortar or bucket with a length of timber. If you're doing it at home freezing and then thawing the apples before pounding makes the job easier. Slicing them is not really sufficient and food processors and liquidisers produce too fine a puree for pressing. In commercial production enzymes (pecinases) might be added and the mash heated. The enzymes stop the mash getting too sticky.

Once crushed, the apples are pressed. Traditional presses consist of a barrel shaped cage which houses a wooden piston. The piston is turned down, putting pressure on the fruit, thus forcing the juice out through the gaps in the cage.

The process is very similar on an industrial scale where tons of apples are pressed in large steel drums with powerful hydraulic presses and built in filter sleeves.

Up to 80% of an apple is water. In commercial production up to 10 litres of raw apple juice can be extracted from about 15-20 kg of apples, i.e. about half the weight of the fruit.

Freshly squeezed apple juice will only keep for two to three days in the refrigerator before it begins to ferment so commercial producers pasteurise it by heating to 71 to 74 degrees centigrade to maintain colour and flavour. If left unpasteurised it may ferment into cider.
Pressed juice is cloudy with small particles of suspended apple solid which contribute to flavour, texture and health giving properties but until very recently consumers have had an aesthetic preference for clear juice so many producers next filter the juice to make it clear. A further micro-filtration process, sometimes aided by enzymes may then take place.

As the apple harvest takes place in the autumn, vast quantities of the pasteurised and filtered juice are stored in steel vats throughout the year until needed for bottling. Ascorbic acid may be added as a preservative. Apples that are picked later in the season contain more sugar and produce a sweeter juice. 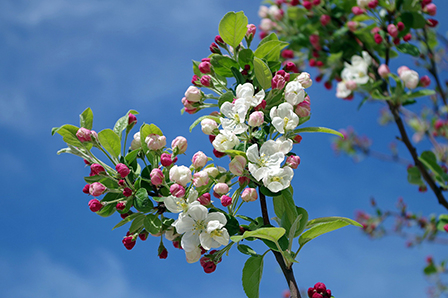 Archeologists have found carbonised apples pips in settlements as early as 6500BC. Research suggest that modern apple trees trace their roots back to the sweet Malus silvestris an ancient apple tree found in what is now Kazakhstan. This tree moved west in the spores of humans and animals and was hybridised with sharp tasting European crab apples as long as 10,000 years ago. Cunieform tablets show that tree grafting was known in ancient Mesopotamia almost 4000 years ago, and the Greeks and Romans were highly competent at grafting apple trees. According to Pliny the Romans cultivated 23 different apple varieties. Much later on, settlers took apple seeds to the New Worlds.

Apples will grow anywhere where there is a mid-mild climate and the soil is well drained. It's estimated that there are around 2,300 apple varieties in the UK today, including Bramley (for cooking), Chivers Gold, Cortwold, Cox's Orange Pippin, Discovery (tends to be the first to ripen), Granny Smith, Jonagold, McIntosh, Royal Gala and Spartan.

Apple juice is particularly rich in potassium and vitamin C. Vitamin C is sometimes added during commercial apple juice production as it can be lost in processing and it acts as a preservative, helping to prevent oxidation of the juice.

It's better for you to drink cloudy apple juice as the fibre content lowers the GI (Glycemic Index) of the fruit, ie it slows down the rate that glucose finds its way into the blood, thus lowering the occurrence of a sugar high, followed by a sugar low. It should also create more of a feeling of fullness. While apple juice can contain many of the nutrients found in the whole fruit, it counts as only one of your five a day because it contains very little of the fibre which is essential to a healthy gut and immune system. 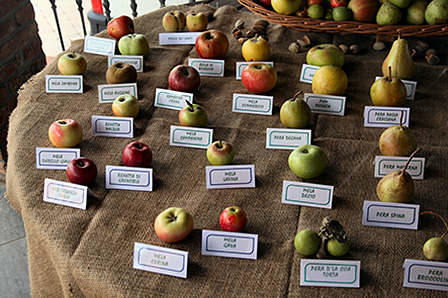 The old Saxon tradition of wassailing is still practised in many British villages (particularly in the West Country) today and usually takes place on 17th January (the old Twelth Night). This largely pagan ceremony is thought to have evolved from a ceremony to bless the apple trees. The ceremonies of each wassail vary from village to village but are generally similar. Wassailers drink to the trees and sing or recite incantations to wake them up to begin growing, to encourage a good harvest and to ward off evil spirits. The wassail King and Queen lead an incantation such as:

Old apple tree we wassail thee
And hoping thou will bear
Hat fulls, cap fulls, three bushel bag fulls
And a little heap under the stairs

The wassail queen may then be handed up into the tree, and the assembled crowd make as much racket as they can by shouting and banging drums and pots and pans until gunsmen fire a great final volley through the branches to make sure the work is done, and the group moves to the next orchard.

•600m litres of apple juice are bottled in Germany every year

•Global apple production in 2012 was estimated at a record 67.5 million tons

•China leads the world in apple production, harvesting a record 38 million tons in 2012. The United States is the second largest producer.

•The European Union harvests about 11.3 million tons of apples a year.

•Apples can be fermented to make cider (hard cider) which can be distilled to make calvados and other apple brandies.