How to use a two-piece cocktail shaker

Two piece shakers comprise of two flat-bottomed cones, one larger than the other. The large cone, or 'can', is made of stainless steel or silver plated steel while the smaller cone can be glass, stainless steel or even plastic. If the smaller cone is glass the pair are collectively known as a 'Boston Shaker', and if metal then you have what's known as a 'French Shaker'.

Two-piece or two-part shakers tend to have a larger capacity than three-piece shakers, so allow for a lot more movement of the ingredients inside from one end to the other. As the name Boston and French may suggest, two-piece shakers are very popular amongst European and American bartenders.

Avoid Boston shakers that rely on a rubber ring to seal. I recommend Cocktail Kingdom, Alessi and WMF tins as I find these seal without a thump and open with ease. But however good your two-piece shaker, these devices demand an element of skill and practice for a new user to become proficient.

How to use a two-piece:

1. Combine ingredients in the glass (or smaller of the two cans).

2. Fill the large can with ice and briskly up-end over the smaller can (or glass), quickly enough to avoid spilling any ice. Lightly tap the top with the palm of your hand to create a seal between the two parts.

3. Lift shaker with one hand on the top and the other gripping the base and shake vigorously. The smaller can (or glass) should always be on the top when shaking and should point away from guests.

4. After shaking for around 12 seconds, hold the larger can in one hand and break the seal between the two halves of the shaker by tapping the base can with the palm of your other hand at the point where it meets the upper can (or glass).

5. Before pouring, place a strainer with a coiled rim (also known as a Hawthorne strainer) over the top of the can and strain the mixture into the glass, leaving the ice behind.

6. The ice used during shaking is now spent and should simply be dumped.
The used empty shaker should be rinsed with cold water before making the next drink.

We recommend always shaking with cubed ice. However, if shaking with large chunks of ice hacked off an ice block (block ice) then a longer shake will be required to achieve the same dilution due to the reduced service area of the ice. Conversely, if shaking with crushed ice then the extra surface area will result in increased dilution. 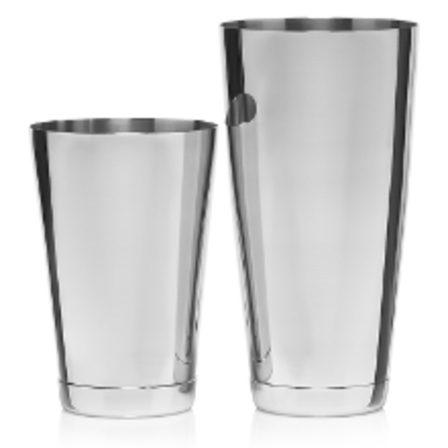