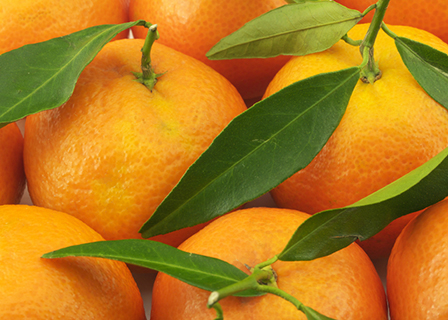 The orange is now so commonly available in our shops and markets that it's hard to believe it was once an exotic and expensive luxury. Although native to China, its name originates from 'naranga' in the old Indian language of Sanskrit.

There are many different types of orange but the best ones for bartending purposes are Washington Navels, which are in season from the end of October. These have a firm, rough skin perfect for cutting twists from and are juicy and slightly sour.

Simply cut in half and juice with a hand or pillar press. If using an electric spinning citrus juicer take care not to grind the pith. However you juice your oranges, juice them as you use the juice.

Perhaps more than any other fruit, the juice of the orange is best enjoyed freshly squeezed. Like other citrus fruits oxidisation and pasteurisation dramatically affect the flavour. 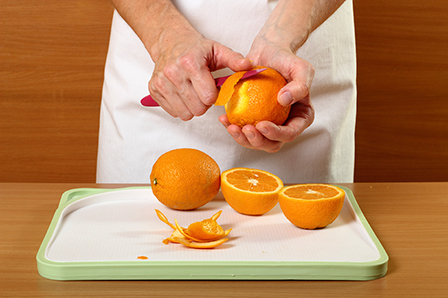 There is a lot of hatred for orange juice amongst some bartenders. As Jeffrey Morgenthaler identifies in his article entitled OJ Is Guilty. The Case Against Orange Juice in Cocktails from January 2014, "OJ has many strikes against it...after it's squeezed, it turns bitter too quickly to be viable in high-volume cocktail operations. Worst of all, it doesn't bring much in the way of flavor." He then goes on to identify just what these drinks need.

"The problem with orange is that it's already balanced between sweet and sour, so it needs to be combined with additional sweet-and-sour ingredients to keep the drink from being thrown off balance."

The quality of the orange juice needs to be addressed. Most decent bars freshly squeeze their juice these days so it shouldn't be a problem for them. But packaged, and so pasteurised, orange juice will vastly affect a cocktail, in all the worst ways. The only way to ensure you're giving orange juice the chance it deserves is to freshly juice the fruit throughout a shift.

Many modern bartenders find vintage recipes using orange juice imbalanced saying that recipes from the books of the early to mid-20th century are somewhat flat. These include the Bronx Cocktail from Craddock's The Savoy Cocktail Book which calls for the juice of ¼ orange, ¼ French vermouth, ¼ Italian vermouth and ½ dry gin. Satan's Whiskers (straight) from the same publication asks for two parts each of Italian vermouth, French vermouth, gin, orange juice; one part Grand Marnier and a dash of orange bitters. Even the Monkey Gland Cocktail; 3 dashes Absinthe, 3 dashes grenadine, 1/3 orange juice and 2/3 dry gin, comes under attack.

It is argued that these recipes are lacking that vital ingredient to make them sing on the modern drinker's palate. Jeffrey Morgenthaler's suggestion for avoiding the pitfalls of orange juice is to use it as an additive to other sours rather than a mixer itself. But there is a trend in London bars to balance the orange without reducing it.

The simple trick, shared with us by Dan Waddy at Satan's Whiskers cocktail bar in London, is the addition of just what Jeffrey suggests; sweet and sour. In the case of the bar's namesake cocktail this is 15ml lemon juice and 15ml simple syrup (1:1). And what a difference this makes to the classic drink.

Satan's recipe tonnes down the vermouth called for, opting to add 10ml of Punt E Mes, Noilly Prat and Grand Mariner but the drink still keeps equal parts gin and orange juice. The drink is lifted and given body and balance with this subtle sweet and sour addition.

Everything you need to know about orange juice

Oranges originated in southern China, northeastern India, and perhaps southeastern Asia. Surprisingly, although they are thought to have been cultivated by the Chinese as early as 2500 BC, there are no early Middle Eastern or Greek references to them but they do make an appearance on the coinage of ancient Judea (now the West Bank) in about 142 BC.

The bitter orange was introduced to Italy by the crusaders in the 11th century and was grown in the south for medicinal purposes and the sweet orange came to the Mediterranean in the late 15th century with Italian and Portuguese merchants. By the 17th century the sweet orange was well known throughout Europe.

The sweet orange was then taken across the Atlantic by Spanish explorers. On his second voyage in 1493, Christopher Columbus took seeds of oranges, lemons, and citrons to Haiti and the Caribbean. Subsequent expeditions in the mid-1500s brought sweet oranges to South America and Mexico.
These regions, which are warm and sunny with plentiful rain, proved to be the perfect growing environment for oranges and even today they are the world's largest orange producing areas. Brazil currently has the greatest production, followed by the US - between them they produce over 40% of the world's citrus. Citrus will grow well in tropical, subtropical and Mediterranean climates and are found in more than 100 countries. Spain is the highest producer in Europe and in 2010, 68.3 million metric tons of oranges were grown worldwide.

Oranges are broadly classified into two groups - sweet and bitter. The modern sweet orange (Citrus sinensis) is an evergreen tree that grows to between 8 and 15 metres, has dark green and waxy leaves and white delicately scented flowers. The fruits take up to six months to reach their full size and ripen. Once ripe they can be left on the branch until needed, if picked and stored their flavour diminishes. Popular varieties of Citrus sinensis include Valencia, Navel and Jaffa oranges, as well as the blood orange. Bitter oranges (Citrus aurantium) are often used to make jam or marmalade. 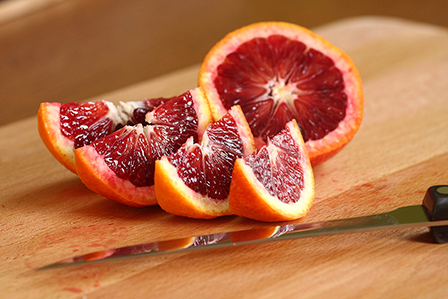 Blood oranges, with their distinctive flavour, are a natural mutation of C. sinensis, although today the majority of them are hybrids. They were first discovered and cultivated in Sicily in the fifteenth century and are now grown worldwide, but still especially in Spain and Italy where they are known as sanguina and sanguinella, respectively. The colouring in the rind, flesh and juice comes from the antioxidant anthocyanin.

Fresh orange juice has a very short life span and as the fridge has only been around for the last 100 years or so the concept of commercial orange juice was unviable until fairly recently. As late as the mid-1910s, when there was an overproduction of citrus fruits in California, growers were forced into destroying up to 30% of their trees because there was no effective commercial way to preserve oranges or their juice. Until the late 1940s, the main supply of orange juice for the consumer was in the form of canned juice. 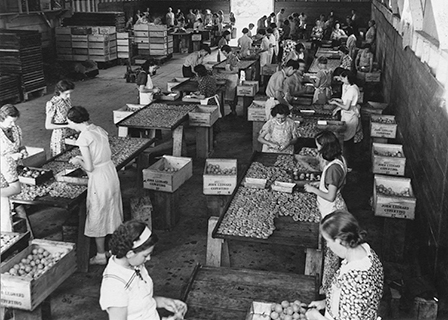 The Orange juice industry really kicked off at the end of World War II as a result of U.S. Government interest in ways of getting vitamin C to troops overseas. They financed scientific research into methods of removing water from the juice and freezing the concentrate into a palatable product. The result was blocks of concentrate that were the perfect retail product for the new fridge-owning American consumer. It also meant manufacturers could store concentrated juice for extended periods of time.

During the 1940s through to the 1950s, the British Government issued concentrated orange juice to war babies as a cheap nutrition supplement, thus establishing the concept of orange juice as a healthy drink. This ethos continued and by the 1980s orange juice was being marketed not just as a health drink, but as the key to a stylish, modern life.

Canning, pasteurization, concentrating, freezing, evaporation and spray drying are the common methods used for the preservation or orange juice.

Most commercially available orange juice is pasteurised to extend its life - juice processed in this way can be kept in air-free tanks for up to a year. Because flavour molecules are very volatile they evaporate during the pasteurisation process, which has a negative impact on flavour so manufacturers often attempt to reinvigorate flavour by adding orange essence and orange oil (derived from the skin), neither of which have to appear separately on the ingredients list. Producers may also choose to add Vitamin C which can be partially destroyed during pasteurization and other ingredients such as citric acid and ascorbic acid.

Orange juice can be categorised as long, short life or freshly squeezed. Long life and short life products are pasteurised to varying degrees. Long life juices do not require chilling and usually keep for 6-12 months if the packaging is kept sealed. Short life juices have a shelf life of up to 30 days and must be kept chilled. 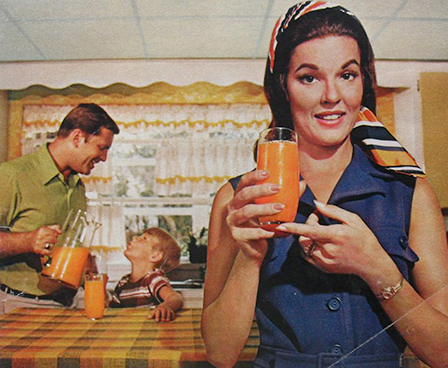 Orange juice is one of the easiest juices to prepare freshly and given that it can lose up to 90% of its nutritional value if left to stand for 24 hours this is well worth doing. What's more, as most people have tasted freshly squeezed orange juice at some time or other they tend to be more discerning about its taste than about other juices.

Orange juice deteriorates quickly once exposed to oxygen which of course occurs the minute you cut open the fruit: enzymes, mainly pectin esterase, cause loss of cloudiness, changes in mouth feel, and deterioration of flavour. The high sugar content causes bacteria, yeasts, and moulds to grow rapidly and produce off-flavours.

Many fruit juices have similar or even higher sugar content to sweetened soft drinks. What's more the sugar occurs in the form of fructose which some scientists are now saying is a more harmful sugar than glucose as the body turns it directly to fat. Orange juice is pretty high in sugar with a 250ml serving typically containing 22g of sugar and 110 calories. As a comparison, 250ml of cola typically contains 105 calories and 26.5g of sugar.

Unfiltered orange juice, often sold as juice with bits in, is better for you than juice that has been filtered as it contains more of the pulpy part of the fruit which is high in antioxidants and provides roughage.

The high sugar content and acidity of orange juice can lead to dental decay so it is recommended that juice is only drunk with meals so that the acid can be diluted. Wait at least 20 minutes after drinking juice to brush your teeth as the sugar in the fruit juice softens the enamel, making it more vulnerable to wear from the brushing. 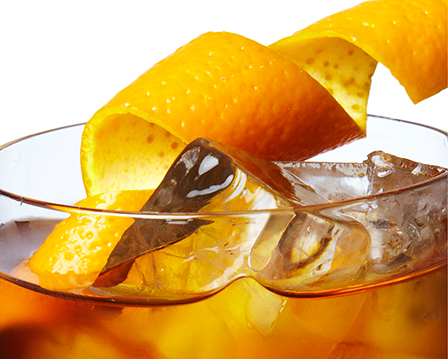 The outer coloured layer of the orange rind can be used as a food flavouring or garnish as its flavour is similar to that of the orange flesh. The white part of the rind is a source of pectin and has nearly the same amount of vitamin C and other nutrients as the flesh. Though usually discarded, the rind can be eaten and where resources are scarce, orange peels are routinely consumed. However, since high concentrations of pesticides have been found in orange peels, some organizations recommend that only organically grown and processed orange peel is consumed.

The patron saint of the early sailors who carried the precious cargo of oranges from Spain to the Netherlands was Sint Heer Klaas (Saint Lord Klaas with Klaas being short for Nikolaas). The Dutch still celebrate Sinterklaasavond (literally Saint Nicholas Evening) each 5th December and during this modern-day celebration, he is supposed to arrive by boat from Spain to bring children oranges and presents.