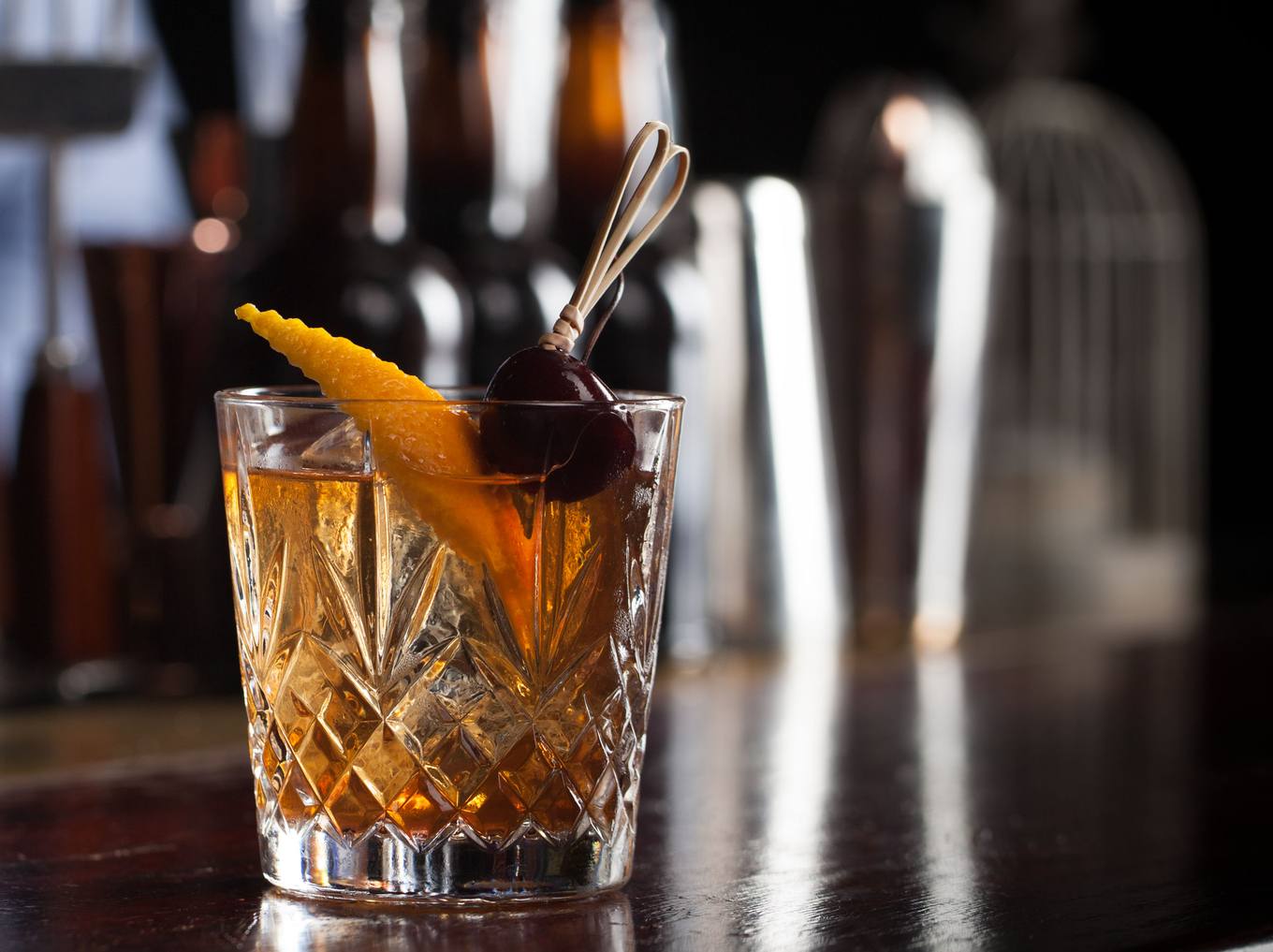 Traditionally made with bourbon or rye whiskey, lightly sweetened with sugar and aromatised with bitters this most classic of vintage cocktails is served over ice in a heavy bottomed tumbler named after the drink and garnished with an orange zest twist.

The Old-Fashioned is just that, a very old and established cocktail, but over many decades this vintage classic has changed name (it was originally the Whisky Cocktail) and has evolved with both the methods deployed to make it and its ingredients influenced by bartending fashions. This has resulted in six different methods/ingredients being used:

1. Bourbon or rye whiskey
Jerry Thomas inclusion of the Whiskey Cocktail in his 1862 The Bar-Tender's Guide, the world's first cocktail book, calls for a "wine-glass of whiskey". In those days that "whiskey" would probably have been rye whiskey with bourbon developing in the decades after prohibition. Consequently, some traditionalists insist an Old-Fashioned should be made with rye, but bourbon is equally correct and the choice of whiskey should be entirely up to the personal taste of the drinker. Bourbon makes a mellow, slightly sweeter drink, while rye adds more spice and kick.

Be aware of the alcoholic strength of your whiskey. In my Old-Fashioned, I like to use a combination of 1½ shot bourbon at 45% alc./vol. and 1 shot straight rye whiskey at 50% alc./vol. (When you shake a bottle of straight rye it should hold a foam for a good few seconds or I consider it too weak for my Old-fashioneds.) 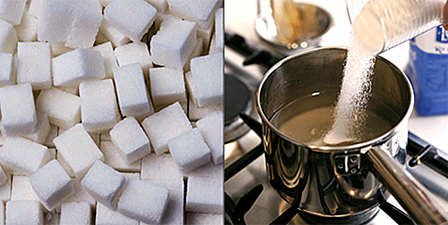 2. Sugar cube or sugar syrup
It's easier (and better) to make Old-Fashioneds with sugar syrup but traditionalists like to use sugar cubes placed in the base of the glass, dampened with aromatic bitters, and usually a splash of water, and is then pulverised and stirred into a syrup with a muddler. All that time and effort to make syrup when pre-made sugar syrup could instead be simply poured in. As David A. Embury writes in his seminal The Fine Art of Mixing Drinks, "You can make perfect Old-Fashionds only using sugar syrup" adding "sugar syrup makes a smoother, better drink." Use a 2:1 (70 brix) sugar sugar, ideally made from unrefined Demerara or muscovado sugar, or a combination of this and white caster sugar.

3. Muddling of fruit
In the U.S. orange and lemon segments, and often a maraschino cherry or two, are regularly muddled into Old-Fashioned cocktails. The practise probably originated during Prohibition as a means of disguising rough spirits and thankfully never caught on in England. As Crosby Gaige wrote in 1944, "Serious-minded persons omit fruit salad from Old-Fashioneds." However, an Old-Fashioned in not complete without an orange zest twist with some also liking an additional lemon zest twist, but that would seem to be heading back to fruit salad territory.

4. Stir in the glass or in a mixing glass
Back in 1862, Jerry Thomas called for a Whiskey Cocktail to be shaken and if you're a lover of Fruit Salads (see above) then you may as well shake your Old-Fashioned. However, correct society, good manners and leading bartenders dictate that an Old-Fashioned should be stirred, and stirred, and stirred some more. The stirring action is essential to attaining the correct dilution. This can be achieved in a mixing glass and then strained over fresh ice in the glass but I prefer to stir directly in the serving glass, gradually adding more ice as I stir.

OLD-FASHIONED DE LUXE Pour into each glass 1 to 2 teaspoonfuls simple syrup and add 1 to 3 dashes of Angostura. Stir with a spoon to blend the bitters with the syrup. Add about 1 oz. whisky and stir again. Add 2 large cubes of ice, cracked but not crushed. Fill glass to within about 3/8" of top with whisky and stir again. Add a twist of lemon and drop peel in the glass. Decorate with a maraschino cherry on a spear. Serve with a short stir rod or Old-Fashioned spoon. 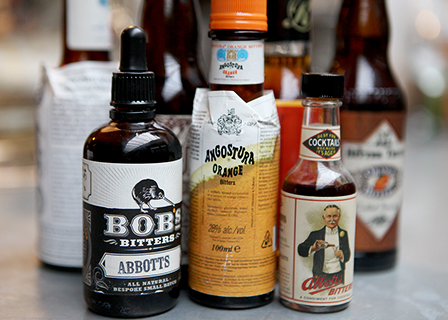 5. What bitters?
There is no doubt (well at least I have none) that an Old-Fashioned is improved by the use of aromatic bitters but the question is what bitters? Originally Broker's bitters were used but almost by default, due to their being one of the only aromatic bitters to survive, Angostura Aromatic Bitters became most commonly used. Thankfully, a huge range of bitters are once again available including reproductions of both Broker's and Abbotts bitters, both of which work well in Old-Fashioneds.

6. Ice
If using a mixing glass to prepare an Old-Fashioned then the drink looks much more appealing and holds its dilution better if strained over a single large chunk of ice. Otherwise, I recommend my usual double frozen ice (from ice machine to freezer and freezer to ice chest.) 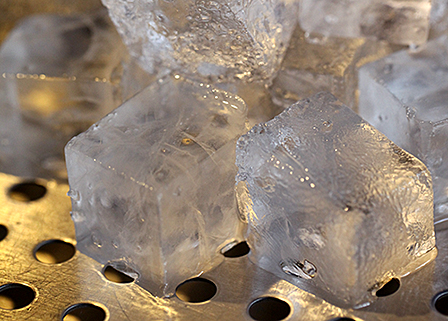 Conclusion
I've experimented with all off the above and find myself reverting back to the method David A. Embury stipulates to make his Old-Fashioned De Luxe and the method endorsed by Dick Bradsell when the Old-Fashioned become popular in London in the mid-1990s - stirred and stirred some more directly in the glass with ice gradually added.

My favoured Old-Fashioned recipe calls for both bourbon and rye. For the reasons given above, I favour sugar syrup over sugar cubes and use a little more sugar than most, but then I also use a dash more of bitters and a glug more whiskey than most so I guess I'm in line with the proportions used by most. 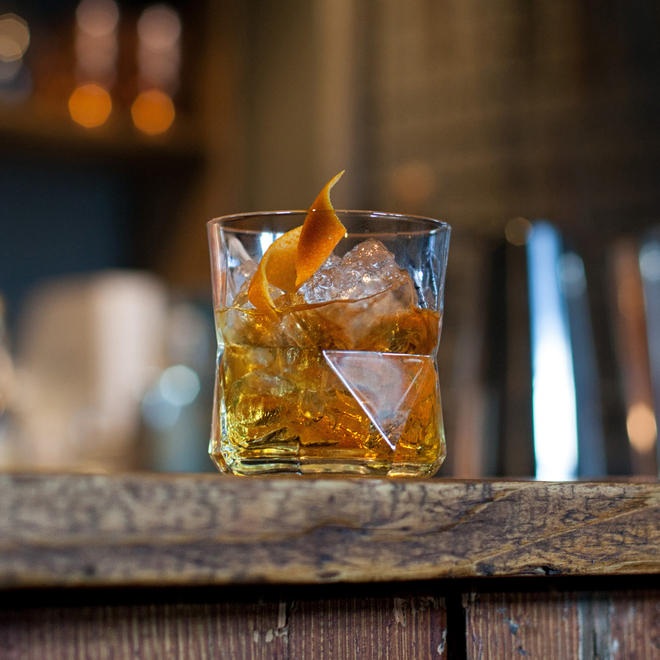 Achieving the right dilution and a good chill are essential to the enjoyment of this sublime classic. 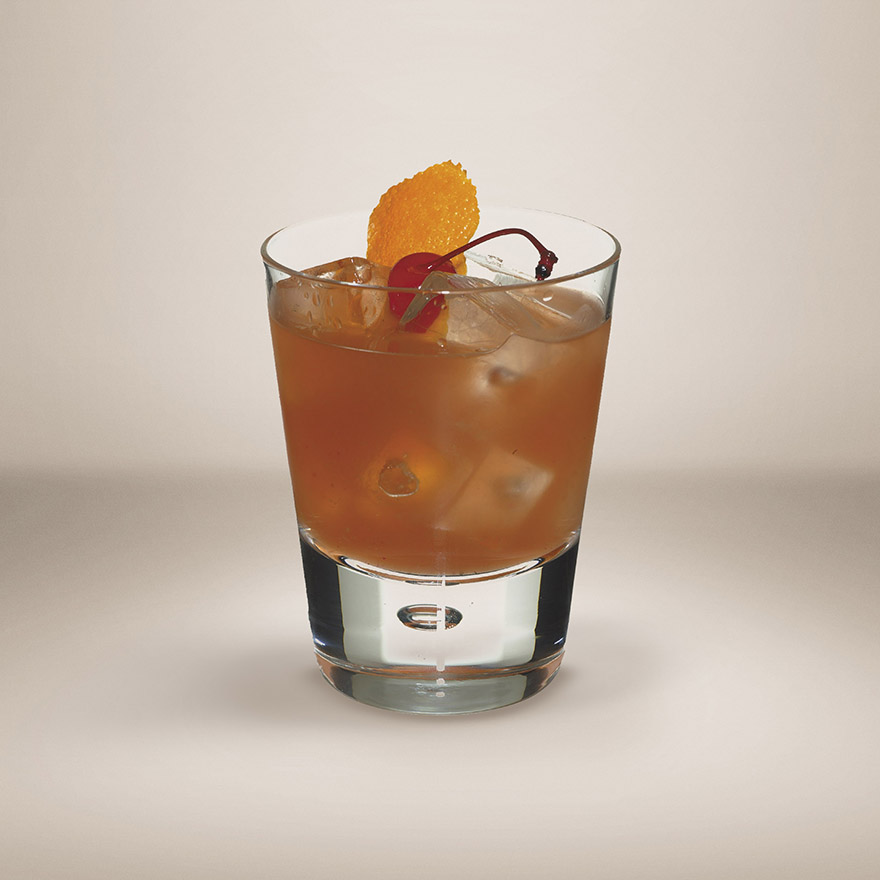 This drink is often mixed in the glass in which it is to be served. Shaking better incorporates the flavours produced by muddling and fine straining removes 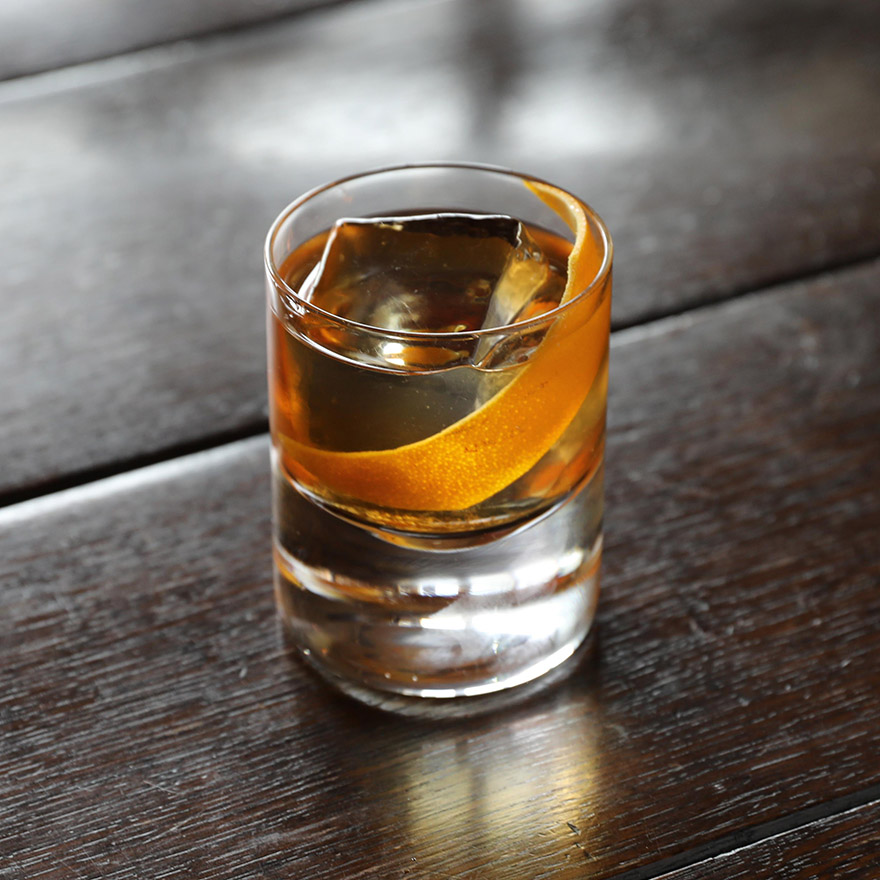