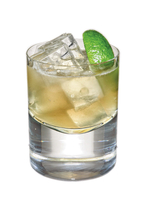 During the 1700s, the first worldwide currency appeared. And, no, it wasn't the US dollar, but a Spanish silver coin with a value of eight Spanish reales, known to anyone who has ever watched a pirate movie as "pieces of eight", and to its users simply as the Dollar.

What the world knew as a Dollar was confused on this day in 1787 when the, not even yet a teenage, United States of America introduced its very own currency, the US Dollar, an invention about as American as apple pie. Mix up a Million Dollar Margarita in its honour. With "rested" (reposado) tequila and rich Grand Marnier, it's really quite luxurious.

This is also the day Nixon resigned

On this day in 1974, the American president Richard "Tricky Dicky" Nixon, bowed to media pressure and resigned.

His crime? Covering up a break-in at the Democratic National Committee headquarters in Watergate. The five men who burgled the place seemed to have been paid by a committee to re-elect Nixon. And Nixon himself was implicated by tape-recorded phone calls and meetings - in one he planned to block the investigation into the burglary by getting the CIA to tell the FBI that it was a matter of national security.

Watergate remains a benchmark for media action against corruption, and it's still worth remembering today. We are enjoying an aptly named creation of our own, the Waters of Chaos. A potent blend, including Chartreuse and overproof rum, it has sufficient oomph to obliterate all but the most serious indiscretions.

Today is also the anniversary of the Great Train Robbery

The Great Train Robbery is one of those crimes that grabbed the British imagination and just, well, stuck. Not least because the robbers escaped with over £2 million in 1960s money, which is nigh-on £50 million today.

In a piece of brilliant planning, a gang of 15 robbers hijacked an overnight mail train, removed the front two coaches, drove them to a bridge, and transferred the money in them to a waiting lorry. Twelve of them were caught and sentenced to, collectively, more than three centuries in jail, not least because the train driver suffered life-changing injuries: but three robbers have never been caught. We are remembering a robbery known as the crime of the century with an aptly named Brass Rail, although the cocktail is named after a very special bar, which in turn is named for the brass foot rail found below most bar counters.

... comment(s) for The Dollar's birthday