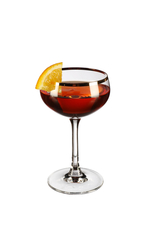 Cabernet Franc Day has been celebrated on the 4th of December since 2015 but this noble grape variety has a much longer history and is believed to have originated in the 12th century Spanish País Vasco (Basque Country) where it was cultivated by Roncesvalles priests.

The book of Wine Grapes says "Cabernet Franc is undoubtedly one of the most important ancient varieties in the Bordeaux region" where it is blended with Cabernet Sauvignon and Merlot. Cabernet Franc is also widely planted in France's Loire Valley where it is vinified alone to produce Chinon. But it's North America and other 'New World' regions that proudly produce single varietal wines labelled Cabernet Franc. Indeed, this is also where Cabernet Franc Day was born.

Whatever Cabernet Franc wine you decide to celebrate today with, we are seamlessly segueing to Jay-Z with The Frank cocktail.

Anyone who remembers The Black Album, released November 2003, as Jay-Z's eighth studio album", will also remember that today is December 4th, the great man's birthday. Hard to forget - he devoted an entire track to his birthday, and called it December 4th. He's a lot to celebrate today - ludicrously successful, insanely wealthy, and married to the rather more obviously attractive Beyoncé.

Born Shawn Corey Carter into unpromising circumstances, he has a business empire that he could only have dreamed of, spanning the gamut from sports representation to clothes and music. A hard-as-nails entrepreneur one of the world's iconic rappers and, if you believe his wife's self-directed movie, an all-round nice guy and outstanding musician to boot, we're toasting him with an aptly named The Frank cocktail.

In Memory of Frank Zappa

In his 1989 autobiography, Frank Zappa famously opined that "you can't be a real country unless you have a beer and an airline". Although notorious for his eccentric behaviour, Zappa was actually quite a sophisticated Renaissance Man.

Musician, composer, film director and wit, he spoke against censorship and inspired musicians from both the rock and classical worlds before his early death on this day in 1993. Garnished with cheese-stuffed olives, the Z Martini has plenty of quirk, though, like the man himself, its port and vodka soul is classical, contemporary and indefinably classy.