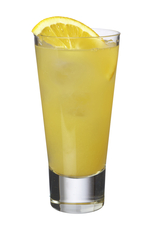 According to some "National Screwdriver Day" was actually yesterday on the 13th. Screw them! Others we respect say it's the 14th. A Screwdriver made with freshly squeezed orange juice is a great way to start any and every day.

Fresh juice from ripe tasty oranges is key, but like so many cocktails a dash of sugar is also needed to properly bring this simple cocktail alive, as is a dash of orange bitters. Try our Screwdriver recipe and be sure to stir your drink using a screwdriver, well cleaned rather than straight from your toolbox.

It's also the day The South Pole was conquered

On this day in 1911, the Norwegian explorer Roald Amundsen became the first human being to reach the South Pole - an incredible feat that is sometimes overshadowed by the sad fate of Robert Falcon Scott, his British competitor.

Amundsen reached the South Pole, beating Scott's ill-fated expedition. Equipped with traditional dogsleds, rather than Scott's motorised sledges, which broke, and ponies, which froze, he used survival skills learned from Eskimos, including fur boots, snowshoes, ice caves and igloos. Amundsen killed dogs for fresh meat as he went and dressed his men in reindeer skins rather than wool.

Scott was devastated to arrive at the South Pole and find Amundsen's tent there, complete with spare supplies and a message for the King of Norway for Scott to bring home should Amundsen not return safely. It was, of course, Scott who died in a blizzard, just 18 kilometres (11 miles) from the safety of a supply base equipped with ample food and clothing.

Today both brave men are commemorated in the Scott-Amundsen Antarctica base. We are commemorating them in turn with a Metropole, a vintage classic based on brandy, which both Amundsen and Scott kept handy on their journey.

Today is also the anniversary of the first interplanetary spaceship

This day in 1972, Eugene Cerman, the eleventh person to walk on the Moon, became the last man on the Moon since he was the last to re-enter the Lunar Module as Commander of Apollo 17, the final Apollo lunar landing.

And a decade before that, the first interplanetary spacecraft successfully came within reach of Venus, the savage planet with surface temperatures of around 500˚C and an atmosphere as dense as deep ocean and stinking of rotten eggs. Mariner 2, a small probe, transmitted data, but no pictures, and its signal lasted for another month or so. Today, all systems dead, it continues to orbit the sun, which it will do, most likely, for eons after all of us are gone.

We are toasting the spirit of human endeavour which put Mariner 2 into space, and the vast, weird world there is outside our own planet, with an aptly named Venus Cocktail, or you might prefer a Venus in Furs.