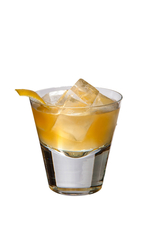 Today in 1965 Canada adopted its iconic flag and the date is celebrated annually as National Flag of Canada Day. The red and white maple leaf design replaced an old red flag with the Union Jack in the corner and funny shield affair stranded in the middle.

Officially called the National Flag of Canada but better known as the Maple Leaf and l'Unifolié (French for 'the one-leafed'), it is based on the flag of the Royal Military College of Canada. The 11 points on the stylised maple leaf don't have any significance and their composition resulted from wind tunnel tests which showed the design to be the least blurry in high wind conditions.

The maple leaf has been used as a Canadian emblem since the 1700s and was first used as a national symbol in 1868 when it appeared on the coat of arms of both Ontario and Quebec. Appropriately we are marking the day with a Maple Leaf Cocktail but you might also consider a Toronto or if you have a French Canadian leaning then perhaps a Quebec.

The anniversary of Decimalisation Day

Back in 1971, this was the day the UK and Ireland decimalised their currencies. Known as Decimalisation Day, before this date we Brits used pounds, shillings and pence. The pound was made up of 240 pence with 12 pence in a shilling and 20 shillings in a pound.

Sadly, coins such as the 'half-crown' (worth two shillings and sixpence, or one-eighth of a pound) were lost but the decimalised pound is more compatible with computers and is simpler to calculate change. The decimalisation of the pound also brought it in line with most other international currencies. We're drinking to this Sterling currency with a Money Penny Cocktail.

In 1564, Galileo Galilei was born in the shadow of Pisa's Leaning Tower. He would go on to become a mathematician, a physicist, an astronomer and, according to Albert Einstein, "the father of modern science".

Galileo's greatest achievement? He set up a model of rational scientific thought and research that would last into the modern era - AKA, he believed that maths and physics, not the Bible, should govern our interpretation of science. He stood up to his friend, Pope Urban, enough to publish an argument that the Earth revolved around the Sun, when the Church believed that the Sun revolved around the Earth. Galileo invented instruments from thermometers to telescopes, discovered four of Jupiter's moons - and much, much more. We are toasting this great Italian with an equally great Italian-influenced cocktail, the Little Italy, created by Audrey Saunders.

Of course it is! We don't have a Gumdrop cocktail with which to celebrate this auspicious occasion but we do have a Jelly Belly Beany. Cheers!