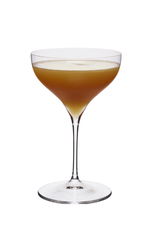 Ok, so the "Eastern" part of this drink is meant to refer to a foreign, exotic east - not London's East End. But sod it. We quite liked the idea of associating "Eastern Sin" with the string of murder, deceit and violence that dominates the BBC television's EastEnders storyline.

It doesn't help that cocktails aren't really big on the menu at the Queen Vic (the EastEnders' pub). Instead, the Queen Vic serves a string of extraordinary, fictional beers: Thames Bitter, North Export...and most notably, Stolenberd 1940 - we think that the last one must be a take on Kronenbourg 1664!

Anyway, it was on this very day back in 1985 that the first episode was broadcast. It's now well into its 6,400th+ episode, and still going strong. The pub in question has burned down twice in 35 years and life in general at Albert Square is as crazy as ever, so let's raise a glass to the long-running soap and all its cast with an Eastern Sin for eastern sinners!

It's the anniversary of The Feminine Mystique

Some 60 years ago, a newspaper profile of the typical American housewife reported that, although 40% thought they'd be happier as a single career woman, almost all of the married women in the survey said that "the chief purpose in her life was to be either a good mother or a good wife".

And then on this day in 1963, Betty Friedan published The Feminine Mystique, a book which, unlike Simone De Beauvoir's longer-lived The Second Sex, would reach an audience of millions and change their lives. None of what Friedan said would be rocket science today. She claimed that millions of housewives were unhappy with their lives, and wanted more from it than to keep their men and children happy. And she argued that it was OK not only to want more but to pursue more, becoming an icon of the feminist movement.

Working women, of all persuasions, owe Friedan a great debt of gratitude, and we are toasting her with a White Lady.

It's also the anniversary of Enron's CEO being charged

Once upon a time, an energy company named Enron came out of nowhere to become the seventh biggest company in America in only 15 years. This piece of financial magic proved, ultimately, far too good to be true.

This day in 2004, after a collapse that cost shareholders tens of billions of dollars and more than 20,000 Enron employees not only their jobs but their pensions, Enron's former CEO, Jeff Skilling, was finally charged with fraud and insider trading. Despite his lawyer claiming that Skilling "did nothing wrong", both judge and jury disagreed. Skilling went on trial in 2006 and was convicted in 2008: after a plea deal, and released in February 2019, after serving 12 years.

One consequence of the Enron scandal? US law was changed, making it much harder for systematic fraud like this to reoccur, and much easier for CEOs to be punished for activities that ruined ordinary people's lives. We're toasting these changes with an aptly named cocktail, the Million Dollar Margarita.