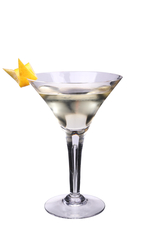 The London Underground, and indeed the world's first underground railway, made its debut today back in 1863 as the Metropolitan Railway.

It ran gas-lit wooden carriages that were hauled by steam locomotives from Paddington Station to Farringdon Street, stopping off at Edgware Road, Baker Street, Portland Road, Gower Street and King's Cross along the way. Despite a few teething problems, including a sewer flooding the construction works, 38,000 folk came out for a ride on the first day. By 1880 the new Tube was carrying 40 million passengers a year.

The London Underground continues to grow, now carrying four million passengers a day and a staggering 1.305 billion per year. Love it or loathe it, The Tube is a London creation to be proud of, so today we're drinking a Piccadilly Martini to the London Underground and all its staff [who we'd love to accept that they are well paid and stop going on strike. Driverless trains ASAP please]. Our Piccadilly Martini recipe is adapted from one in the 1930 edition of Harry Craddock's The Savoy Cocktail Book. Alternatively, you might consider a London Scramble more appropriate.

It's also the day HMS Tiptoe ran aground

Today, back in 1964 the unfortunately named HMS Tiptoe, a British submarine, ran aground on a mudbank in the River Clyde, causing red faces all round, particularly as it run aground opposite the house of the Royal Navy's Captain in Charge for the Clyde area, Captain G. D. Pound.

We should mention that the sub had been named Tiptoe, over howls of protest from the Navy, by none other than Winston Churchill, who may have been drinking at the time.

In 1955, Tiptoe had hit a steamship in Tromsø Harbour, Norway; in 1965, she had a whoopsie with the Royal Navy ship, HMS Yarmouth, off Portland. When she was finally retired, in 1969, a ballerina danced on her deck in honour of her name. We are toasting Tiptoe with a Tip Top Cocktail, a surprisingly delicious spirit-free concoction we found in Albert S. Crockett's 1935 Old Waldorf Bar Days.

... comment(s) for The London Underground's birthday