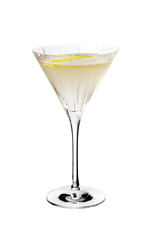 Since first appearing on the cover of British Vogue in 1993, the Croyden stunner has been on it over 30 times since, as well as having campaigns with Gucci, Versace, Calvin Klein, Chanel, Dior and Burberry - just to mention a few.

It's no secret that the supermodel has never shied away from a good night out, so we were wondering what we'd serve her if she brought her birthday celebrations to our bar tonight. We did some research just in case, and found out that her drink of choice is a vodka and tonic. To make it a bit more special, we've taken those ingredients and decided that a Reversed Vesper & Tonic might make it a more memorable drink, so practice mixing one tonight - just in case!

Anniversary of Ivan The Terrible's investiture

Ivan IV 'The Terrible' crowned himself 1st Tzar of Moscow this very day back in 1547. He is said to have started life mad and got madder and madder as the years went on, though it's not surprising, as he was imprisoned in a dungeon by his mother for most of his early life.

He was an insatiable reader whose favourite pastimes included rapine, throwing pets out of the upper windows of the Kremlin and weddings - he had eight wives. On the other hand he was a devout Christian and a champion of the poor and the oppressed.

The first Czar of all the Russian people, Ivan IV transformed his country from a small medieval state into a wealthy empire. Because some of his behaviour was rather dubious, today we're drinking a Nutty Russian.

It's the anniversary of the Columbia Space Shuttle launch

On this day in 2003, the space shuttle Columbia blasted off for its 28th mission, one that had been delayed 18 times over the previous two years for one fault or another.

Around 82 seconds after launch, with the shuttle already travelling at almost 2000mph and an altitude of 66,000 feet, a piece of insulation foam about the size of a suitcase broke off and struck the Columbia's wing. It wasn't the first time this had happened. But in this case the impact would prove fatal. During re-entry, just over two weeks later, the shuttle overheated and exploded in mid-air, killing all seven crew, and scattering debris and human body parts across several US states.

In honour of six brave men and one brave woman, we are drinking a Natural Daiquiri, made to the countdown formula - 3:2:1.

It's also the anniversary of the Vauxhall helicopter crash

In quiet and sad memory, we offer an Aviation No. 1. This day back in 2013, Londoners were shell-shocked as a helicopter struck a crane and plummeted onto Vauxhall Road, killing the pilot and a pedestrian.

Peter Barnes, one of Britain's most experienced chopper pilots, who'd piloted for productions including Saving Private Ryan, and received an award for outstanding bravery after rescuing someone from a swollen river, had been relying on his skills to fly in low cloud. He was on his way pick up the restaurateur Richard Caring, a friend and long-term client, from Elstree to take him down to Yorkshire: Caring had been concerned that the weather was too bad to fly, but Barnes wanted to try.

That effort, and the position of a vast, 230m high crane, cost two lives, and injured 13 people, but may well lead to rules about flights over London being changed. In the hope of improved aviation safety and in memory of those who were killed or injured, we're drinking an Aviation.