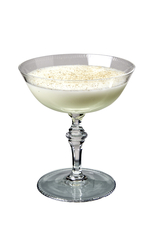 One minute after midnight on this day in 1920, the Volstead Act became law and Prohibition descended on the United States, making it illegal to possess, sell or manufacture drinks with significant alcoholic content.

Most saloon keepers, restaurateurs and drinkers had spent the previous night enjoying as much of the good stuff as they could, often surrounded by funereal black crepe hangings, and perhaps with a ritual coffin passing through.

Harry Craddock claimed to have served America's last legal cocktail, at the Holland House, on the stroke of midnight on 16 January, before taking ship, alongside many other talented American bartenders, for Europe.

We are marking the beginning of the "Noble Experiment", and one of America's more prolonged flights into insanity, with an Alexander, a hugely popular cocktail in the 20s which still repays rediscovery today.

Surprisingly, given the history of this day above, the 17th of January has been declared "National Hot Buttered Rum Day" in the United States.

While it is perhaps a surprising choice for the anniversary of the Volstead Act passing into law, the Hot Buttered Rum is a very fitting drink considering the weather we endure at this time of year in the Northern hemisphere. So why not join us with a warming Hot Buttered Rum.

Franklin was one of the founding fathers of the United States as well as an author, politician, scientist, statesman, diplomat, chess master and wine connoisseur.

Perhaps he fitted so much in because he realised that: "wine makes daily living easier, less hurried, with fewer tensions and more tolerance." Wise words indeed.

Franklin was born on 17th January 1706, so it's fair to say that cocktails weren't that big during his lifetime. We do know that he was a Madeira fan though, so we thought that a Boston Flip would be a good celebratory drink as its named after his birthplace, and incorporates his beloved Madeira. After all, he said that he "should prefer to an ordinary death, being immersed with a few friends in a cask of Madeira, until that time, then to be recalled to life by the solar warmth of my dear country!" Or, of course, you may decide a Franklin Dry Martini more fitting.

... comment(s) for The day Prohibition started