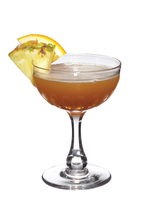 This day in 1922, the Egyptologist Howard Carter was about to give up hope on ever finding the tomb of Tutankhamun, which he was convinced lay somewhere within the Valley of the Kings, a forbidding canyon near the town of Luxor.

Or, to be more precise, Carter's backer, Lord Carnarvon, was about to give up hope and pull all funds. Then one of his labourers stumbled upon a set of stairs leading down into the sand, revealing the tomb of this obscure king, complete with beaded sandals, gold and lapis death mask, and some very bling gold beds.

Tutankhamun was only 19 when he died, but he had reigned for a full decade, and conceived two children with his sister-wife - he was buried with the foetuses she miscarried. But by pharaoh standards he was small fry. We are celebrating King Tut Day with a King Cole Cocktail, a valuable find unearthed in Harry Craddock's excellent book.

The Interpretation of Dreams was published this day

In honour of Freud, the father of psychoanalysis, who transformed mental-health treatment with his talking cure but sadly had to flee his Vienna home for London in old age, mix up a Dream Cocktail tonight. Aniseed, orange and cognac make a positively dreamy after-dinner combo.

Sean Combs, the artist once known as Puff Daddy, often known as Puffy, and now known everywhere but Blighty as Diddy, was born in Harlem on this day in 1969.

Perfumer, designer, marketer, musician, producer and actor, he has made an impressive ascent from party promoter and record industry intern to the status of the richest man in hip-hop, dating Jennifer Lopez and redefining bling along the way. Love him or loathe him, the man has a style that is hard to ignore, and his A-list parties are legendary. Yet, despite his New York origins and New Jersey residence, there is something ineffably Miami about the Diddy. So, eschewing Mr Combs' preferred tipple of (yes, really!) vodka and lemonade, we are raising a glass of Miami Beach.

On this day in 2003, the Liverpudlian soap that brought Anna Friel to stardom and Jennifer Ellison to supermarket tabloid fame, showed its last ever episode, and the doors shut on Liverpool's Brookside Close for good.

Trashy, it may have been. But, by the standards of the 1980s, Brookside was not just edgy but cutting edge. It showed the first ever pre-watershed lesbian kiss; delved deep into domestic violence and drug addiction; and, as early as 1985, featured an out gay man in a non-judgemental fashion. Later, it would spark howls of protest by covering consensual incest. And, in today's era of heavily scripted reality, Kardashians and TOWIE, is it a little sad to say we miss it?

We're toasting the good old days when fiction was fiction and fact was fact with an aptly named Brooklyn Cocktail, a Manhattanesque rye cocktail that really is worth a try.

Felix Kir led quite a life. He was a French priest at the outbreak of the Second World War, though when he heard that the German army had infiltrated his

It's the Anniversary of the Mississippi's 1st bridge

Now, we’re not the types to go about celebrating the building of any old bridge, but we are particularly fond of New Orleans and so by extension the