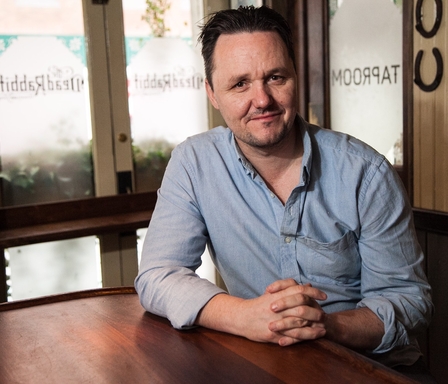 It's no accident when someone wins the bartending Oscars for two separate venues on two different continents, five years apart. And Sean Muldoon, one of the chaps along with Jack McGarry behind Dead Rabbit and BlackTail, made up his mind to be the best in the world almost 20 years ago – just after he walked out on the industry.

During The Troubles, the period when Northern Ireland's Catholics and Protestants fought each other with knives, fists, guns and bombs, tending a Catholic bar by a Protestant part of Belfast was a risky business. And, one night, the local bar Muldoon was working at was hit in a revenge attack.

Protestant gunmen killed one guest and injured others, including the doorman. “You see it on TV,” Muldoon recalls. “But I didn't realise the bar owner and the bar manager had to come in the next day and clean the mess.”

Mopping up the blood left its scars, while the constant fear of another assault had him jumping at shadows. A couple of months after the murder, as Muldoon was locking up the bar, on his own, late at night, a full-scale panic attack hit. He went to the boss and explained he was having “a bit of a breakdown”, only to be told he was on his own. He quit.

And so, in 1998, the journey began. Muldoon had been in and around bars, at that point, for several years. He'd left school at 16 and fallen into bar work after it proved a better way to escape from home and support his musical aspirations than the French Foreign Legion (Muldoon lasted barely a week). He had made the CD he'd dreamed of making and needed a new direction.

The first step, clearly, was to get some training. “I started a Guinness management training course on my own money,” he recalls. “These guys said that if you want to be the best you need to go and work for Jas Mooney.”

Mooney's company, Botanic Inns – then just three bars on the cutting edge of what was known as the “style bar” revolution – was a revelation to a young man from Ardoyne. “I'd never seen a bar like it in my life!” he says. “The doorman was very welcoming – I was used to the local level, where the doorman looked like a thug in a bomber jacket, and these guys were wearing long woollen trench coats and opening doors and getting people taxis, like concierges.”

Inside, his eyes continued to widen. There were bartenders in white collared shirts and long black aprons. There was a cocktail menu, with 16 whole drinks on it. There was a wine list! Espresso machines! Muldoon might never have seen anything like this, but he knew he had to be a part of it. He sent in his CV to each of Mooney's bars and landed a gig at Madison's, for roughly a third of the wage he'd been earning in North Belfast.

The revelations didn't stop. Mooney was on the verge of opening a new bar, The Fly, and the staff were buzzing about the imminent return of a Canadian named Morgan Watson. Suave, professional and knowledgeable, Watson became an early role model for what a bartender should be. “I remember thinking, 'If you want to be the best in the world, you need to be better than that one guy,'” Muldoon says.

Better yet, Watson introduced him to what was happening in London – the bars, the magazines, the bar shows, bartenders like Dick Bradsell and Nick Strangeway. Muldoon realised that, to be the best in the world, he needed to understand cocktails and London. Come 2002, he knew drinks and drink trends well enough to set up his own consultancy business, the Perfect Drinks Company.

The bars Muldoon worked on racked up awards – best in Ireland, best in the UK – and he began presenting on cocktails and training bartenders. Yet, come 2005, after giving his spiel to one too many groups that didn't want to be there, his confidence vanished. The old familiar panic reasserted itself as crippling stage fright that spread its tentacles into every aspect of his daily life.

“I decided I needed some time out,” Muldoon says. “So I went to work on a cruise ship for six months – I just didn't want anything to do with cocktails. Then I got off the boat and went to work for Tony C in the Shochu Lounge, the bar at Roka. I did three months with Tony and between that and the six months on the cruise ship it helped me get my confidence back and refocus.”

Muldoon married his longterm partner, the mother of his two now adult step-daughters, and started applying for jobs in London. He wasn't sure what he wanted to do next, but he was fairly sure he'd got as far as he could in Ireland and, once again, he was looking for the next step on the invisible ladder to the top.

Enter Bill Wolsey, who was about to open The Merchant Hotel. Wolsey had heard about the awards Muldoon's consultancy projects had won, and knew his reputation. The Merchant was only Belfast's second five-star hotel, so a destination bar was a must.

“Bill asked me what I could do,” Muldoon recalls. “I said, 'I will make this the most awarded cocktail bar.' I'd spent eight years watching cocktail bars very, very seriously and I saw this was my one opportunity to really get it at home. I wasn't going to have to go and work overseas and leave my new wife.”

Despite being based in Belfast, Muldoon had made a point of coming to London three or four times a year to research bars. Inspiration for The Merchant came from the two London venues that had impressed him most: Salvatore Calabrese's Library Bar at the Lanesborough, and Jonathan Downey's Milk & Honey. Muldoon wanted to create a bar programme a bit like Milk & Honey's in a setting similar to the Library Bar.

The Cocktail Bar at The Merchant opened in early 2006 and rapidly began to make a name for itself. First there were stunts like the world's most expensive cocktail, a £700 Mai Tai made with 1917 rum, which formed part of an innovative bar programme centred on upgrades. Then there was the Connoisseurs' Club, which saw bartending luminaries from across the UK come to Belfast to startend and present.

In 2008, with plenty of UK awards under his belt, Muldoon entered The Merchant for three Tales of the Cocktail awards. It didn't win a single one. “I remember being devastated, thinking that I wasn't as good as I thought I was,” he says. “It was heartbreaking.”

Muldoon turned for counsel to our own Simon Difford, one of the judges. He said that American awards would always look to American bars first, but if he wanted to improve his chances, he should fly the big US players over to his bar. Muldoon expanded his Connoisseurs Club to include American luminaries – and the buzz began to grow. In 2009, the Merchant won three Spirited Awards; in 2010, it scored World's Best Cocktail Bar.

You would think that, having set out in 1998 to become the best bartender in the world, and having won the bar world's answer to the Oscars in 2010, Muldoon would have been ready to pronounce his ambition satisfied. You would be wrong. Not only were the Merchant's management and its now-celebrity bar staff primed to go their separate ways, but Muldoon was painfully aware that his world's best bar award was really a sympathy vote.

Allen wasn't just full of suggestions. He had cash to invest as well. And so Muldoon signed up the Merchant's bar manager, Jack McGarry, and set out for New York, a metropolis he only knew from the odd weekend's barhopping, with the aim of starting the world's best bar. It would take more than two and a half years, three additional investors and aeons of gruelling research before Dead Rabbit finally opened.

But first, they needed to find a concept. “When we invited all these famous people over to Belfast to do these talks, we'd bring them up the street to the local pub, the Duke of York, which was an Irish pub with a big selection of whiskeys and draft beers,” Muldoon says. “People appreciated what we were doing in the hotel but felt comfortable in the pub, and that's where we wanted to go when we'd finished work.”

And so the basic framework came about: a 2 in 1 bar, with classic cocktails in one room and an Irish pub in another. But to deliver an Irish bar in New York City, probably the world capital of Irish bars, without succumbing to cheese, is not easy – even if you're Irish. Authenticity was essential, so there needed to be both an Irish connection and a cocktail connection. Muldoon picked the period when Irish immigrants arrived in Lower Manhattan escaping famine, looked up a list of the old gangs of New York, and saw the name Dead Rabbits.

“I said to Jack, do all the drinks from this era, reinvent all these old forgotten punches, look at all these books – everything's got to be before 1900,” he recalls. “I focused on the whole concept: what pictures, what music, what food, what the staff should wear...”

Yet Muldoon still isn't resting on his laurels. After consulting on GreenRiver in Chicago, he and McGarry recently opened BlackTail, a Cuban-themed waterfront bar that harks back to Hemingway's Havana. Although this one took only nine months to open, it's characterised by the same borderline OCD attention to detail that won Dead Rabbit its laurels.

“I don't take anything for granted,” Muldoon confirms. “The two and a half years we had in New York before we opened the bar were a lesson, a life lesson... Things can change in a minute.”