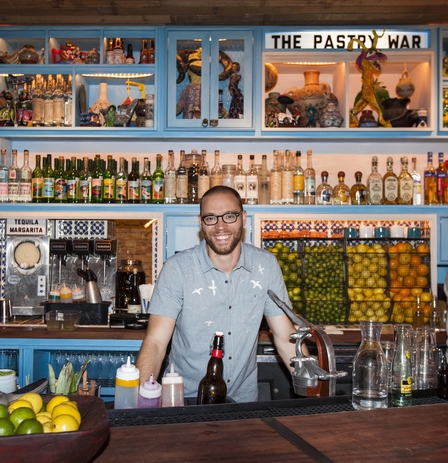 Bobby Heugel hasn't worked in cocktail bars in New York, London or San Francisco. He wasn't trained by any big name 'star-tenders'. In fact, Bobby hadn't even been into a craft cocktail bar before launching his own concept: Anvil in Houston, Texas. He's now taken the city with a second bar, The Pastry War, and he's not stopping there.

Things seemed to kick off for the Houston cocktail scene around five years ago. Historically, the city, best known for its oil and aeronautical industries, didn't feature on cocktail aficionados' radars.

But then Bobby Heugel, who'd previously worked only in restaurants and clubs, launched a showy, contemporary styled but classic cocktail-led bar, and something changed. Anvil's success, apart from igniting the scene, has managed to bankroll another five hospitality concepts for Bobby and his partners, with two more in the pipeline.

On the back of this, Bobby's been featured in practically all the big American publications, including an enviable spot of Forbes' 2011 list of '30 Under 30: Food and Drink', and he's been lauded by industry luminaries including Dave Wondrich, who wrote of the bar in Esquire earlier this year: "In Texas, it's Anvil... You won't find a better drink anywhere in America."

But while Bobby didn't simply wake up one morning and decide to open a bar, he says there was a natural gravitational pull towards cocktails based on his exposure to other areas of hospitality. Working in clubs through university south of Chicago, his only foray outside of his home city, Bobby developed a sound appreciation of fresh ingredients, stemming from his first job in a Mexican restaurant. "If you have access to fresh ingredients and the ability to buy spirits, and you chose to do so in a manner that focuses on quality, you're going to end up in the cocktail world," he says.

Moving back to Houston from university saw Bobby take a job in a restaurant while deciding what would come next. Settling on opening up his own place he then moved on to another restaurant where he gave himself an ultimatum: one more year in restaurants, then he'd concentrate on his own venue. In collaboration with childhood friend Kevin Floyd, and equipped only with a passion for fresh ingredients and a burgeoning understanding of cocktails, they created a bar completely tailored to its surroundings. In March 2009 Anvil threw open its doors. 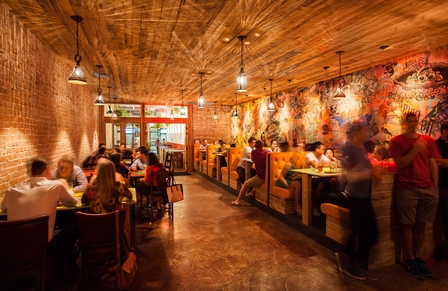 "Before I opened Anvil I had never even been to a major cocktail bar. It wasn't until six months later that I went to New York and visited some of the bars there, so we definitely opened it in our own style with our own sense of what it means to be a Houstonian," says Bobby.

Houston is a city where the modern speakeasy would never work, he adds. It's a style that doesn't fit with the southern way of life: straightforward and unassuming, a sprawling mix of communities, where industry, culture and residential neighbourhoods rub shoulder to shoulder, meaning the mix of people coming through the door is as diverse as it gets. Anvil is very much a product of this. No hidden, dimly lit Prohibition rip-off: it's open, light and welcoming, catering for those who enjoy a drink but don't necessarily worship the cocktail.

"We don't take reservations or hold a line at the door. We just have fun because it's Houston and it's Texas and I think that's a trend going on in cocktail bars around the world now: let's have fun with things and let's serve more people and get away from speakeasy styles. In Houston we have always done things like that because it's what the city expects of us."

As the first modern cocktail bar in the city the list is naturally classic-based. The concept, grounded by the menu, is 100 drinks that Bobby felt everyone should try once in their life. In addition, there's eight house cocktails which are more progressive.

"I don't think doing classic cocktails is very hard at all, I think we like to talk about it as though it is but it's really just an ingredient choice and then developing technique," he says.

How hard is it to open a bar with no concept of what the wider competition is like? Difficult at first, Bobby says, with plenty of incredibly steep learning curves. But with enough research into classic cocktail menus it wasn't as if he went in totally unprepared - something Bobby is now working on again as he revamps the menu, carrying around with him a stack of back-breaking historical cocktail books.

From one bar to Underbelly restaurant, the Blacksmith coffee shop, Julep cocktail bar, The Hay Merchant beer-bar and then The Pastry Wars: Bobby and his friends quickly ran with their success, taking over all the best city venues, as part of a co-op called Clumsy Butcher.

"We took the momentum from Anvil and used it to help our friends who are passionate in other areas open their own places, firstly with Kevin's beer bar: the deal was, if he did the cocktail bar with me I'd do the beer bar with you."

Underbelly, launched with head chef Chris Shepherd, has won a string of awards and brilliant reviews. Most notably the New York Times, who described the venue as "helping to make [Houston] into one of the country's most exciting places to eat."

"I don't have as much to do with those and they don't have much to do with the ones I run: we're just all using our different resources to support each other," says Bobby. But this co-op of friends and business partners does take up most of Bobby's day-to-day life, leaving little time for luxuries such as sleep.

Up at 8am he'll head to Blacksmith, where he'll catch up on emails, work on menus and plough through admin. After meetings, visiting venues and conducting any cocktail training sessions, he'll be at The Pastry War bartending till 3am. "Not a lot of sleep, but I'll sleep when I'm dead," he jokes.

As if the workload wasn't enough, Bobby is helping out at OKRA Charity Saloon, a bar run for charity by a collaboration of about 25 city restaurant and bar owners. "This year alone we've donated $235,000 to charity."

With accolades and press attention following Bobby wherever he goes, it's no surprise that his newest venture, a mezcaleria paying tribute to the Franco-Mexican Pastry War of 1838, is already winning plaudits - the Pastry War was fought after Mexico refused to give compensation to a French bakery in Mexico City that had been destroyed by Mexican officials. 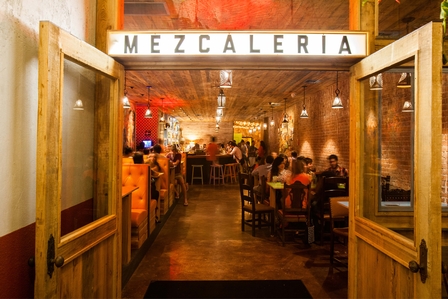 "I've seen a lot of bars that are spirit-focused but I think they're taking a spirit category and trying to apply it to the modern cocktail movement," he says. "That's not our objective. We do have cocktails, but it's a secondary focus: what we're trying to do is share a cultural perspective, which is different."

On sale is Tepache, a beverage made from fermented pineapples skins; Horchata, a milky drink made from rice and agua frescas, used in cocktails or served on its own. The bar also makes traditional accompaniments to go with the agave spirits and change them frequently - at the moment they're serving verdita.

And the French bit? It gets a smaller bite of the cherry: "We have small French touches and we're going to start doing a French night to poke fun at the French a little bit. Bars are great when they have a narrative," he says.

The bar is modelled after some of his favourite Mexican cantinas, so he has installed two pool tables to mirror the style of the venues he has seen in Arandas, and displayed a collection of artefacts acquired in Mexico. The playlist is Mexican - with a touch of French hip-hop.

"I think our proximity to Mexico certainly helps. I grew up in a predominately Mexican neighbourhood. [My business partner] Alba Huerta is from Mexico, she immigrated with her family when she was eight-years-old. So there's a lot of history there but we get people from all throughout Mexico and South America in our bars, so I think if there's a city that's going to really try and approach this spirit category from a cultural point of view it's Houston."

And support truly has rolled in from around the world with homage being paid to their vintage tequila, the 17 Mexican beers on offer and the use of both Persian and Key limes. Bobby and Alba also have a list of brands they refuse to sell written on the wall. Apart from the unappealing worm-in-the-bottle brands they also publicly refuse to sell mixtos and any brands which supported NOM 186 (a list of proposed rules which would have stifled smaller producers) - all written on the wall. 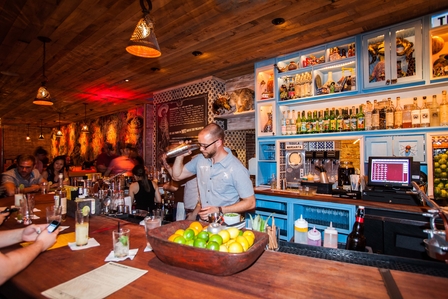 While Texans may not be quite as in touch with their cocktail side as New Yorkers, San Franciscans, Portlanders and Angelinos, and are unwilling to pay the prices that those city dwellers have come to expect cocktails cost, Bobby says the most discussed and busiest bars in the city are cocktail bars and the scene is attracting talent. "There is a great collection of bartenders here which I think could hold their own against any one from around the world. We have to create drinks that are good at a much lower price point than anywhere in the country: the average cocktail in Anvil is $9.25."

In a city without an obvious cocktail heritage, Bobby is fast becoming cocktail royalty and a walking advertisement for a city that, while not quite matching up to the pedigree of its closest cocktail scene, New Orleans, Houston is now firmly on the mixological map - and at those prices, we can see why.