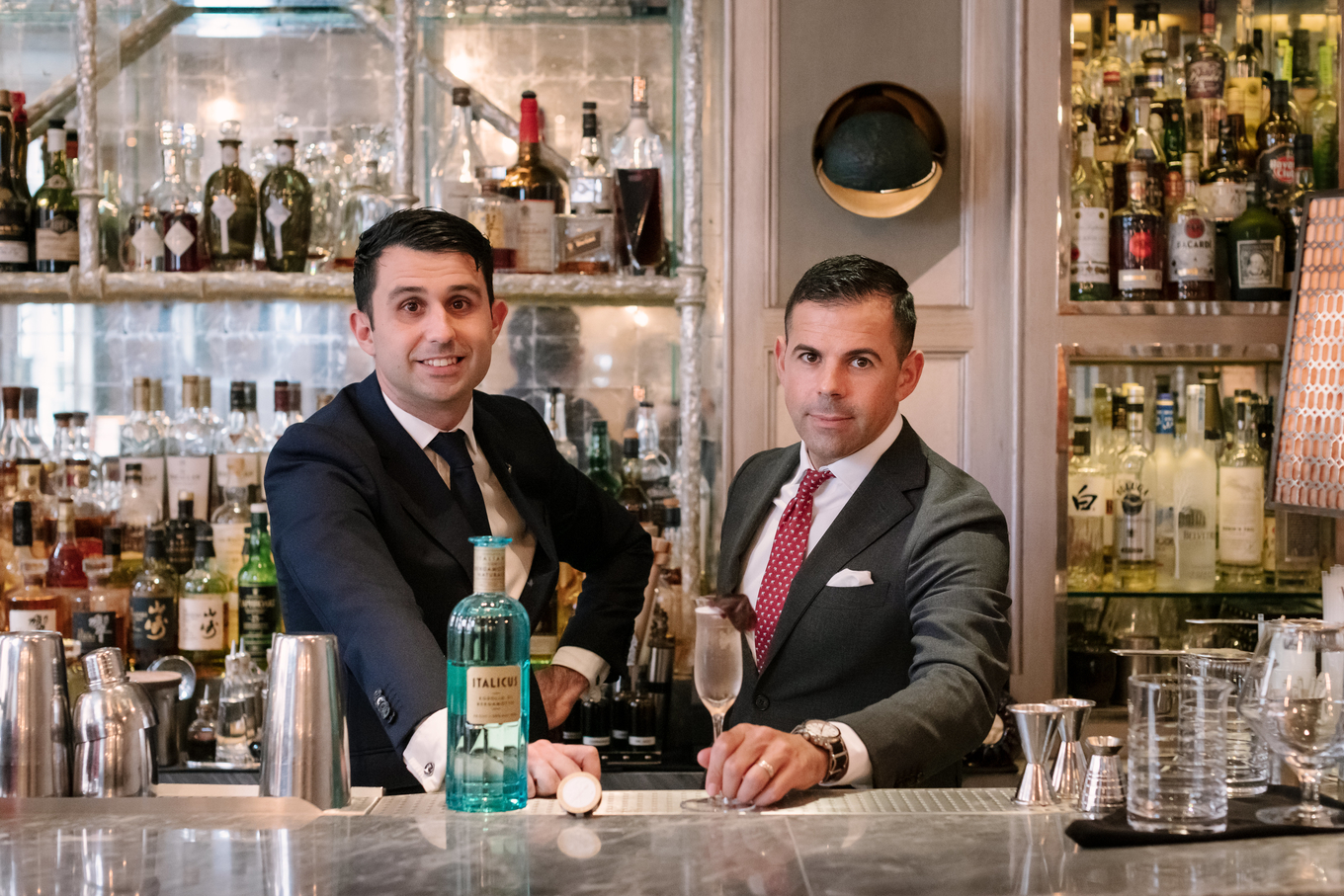 Today Giorgio Bargiani covers the prestigious role of Head Mixologist at one of the world's best bars and with master Ago Perrone has made their signature Martini pour famous globally. However, Giorgio's passion for hospitality roots back to a very young age, starting as a family affair in his aunt's restaurant bar in Pisa, Italy, where he first cut his teeth.

Giorgio started working as a bartender in local nightclubs while studying for his Communications degree. He was immediately captured by the vibe, atmosphere, creativity as well as the relationship building opportunity offered by the job - the same elements that still drive his captivating enthusiasm today.

Fascinated by the caliber of the cocktail offering and service of some of London's top hotel bars such as The American Bar, The Connaught and The Artesian, Giorgio decided to take on a new challenge and role in a luxury hotel in order to sharpen his knowledge and skill set. It was during his time at the Splendido Hotel in Portofino that he received the life changing call from The Connaught Bar - on 8th August 2014, as he still recalls. During his only day off, Giorgio flew to London and came back with a job offer. 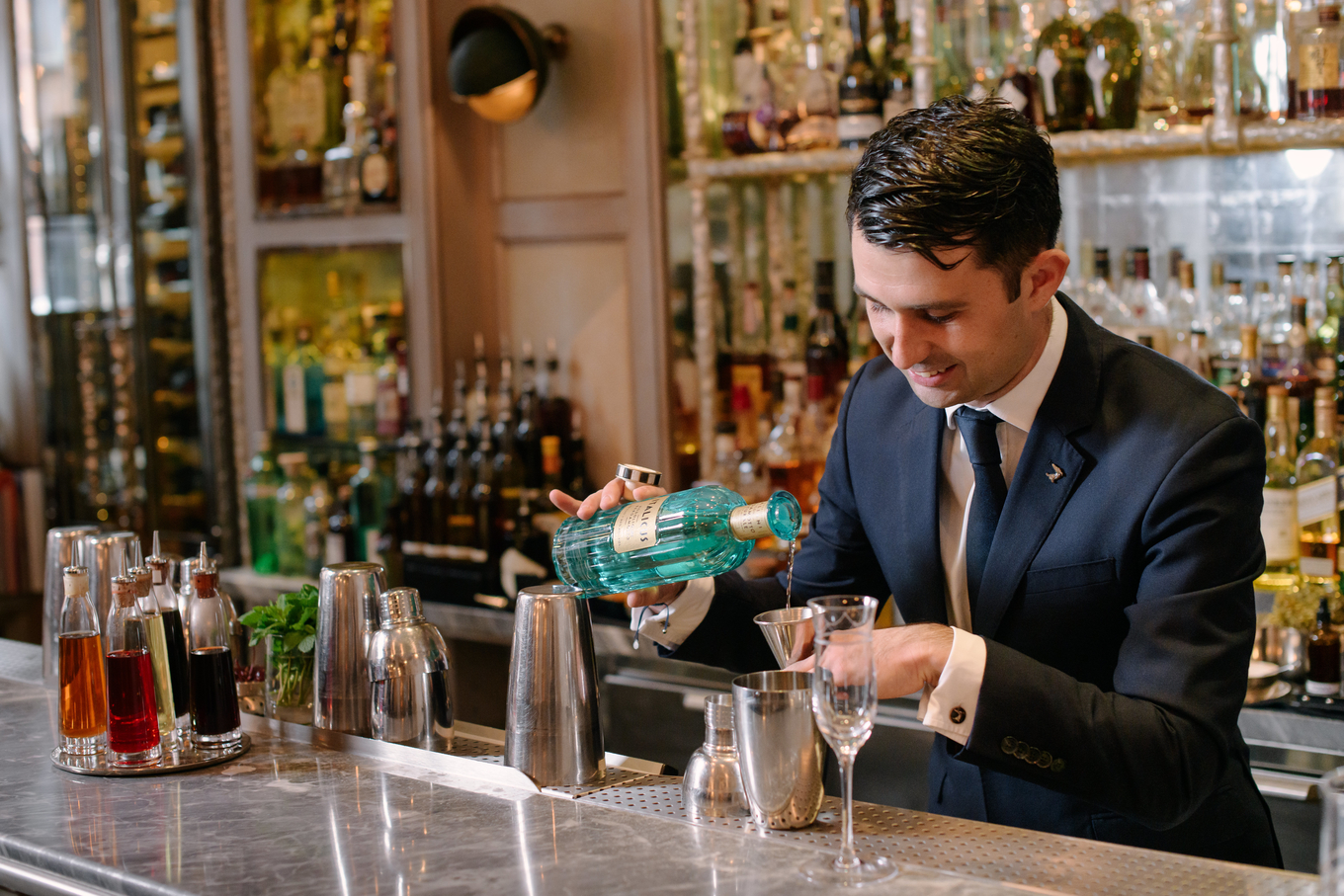 The following month, Giorgio started as bar back and with an incredible drive and talent he gradually worked his way up to be promoted Head Mixologist in January 2019. Right arm of mixology titan Ago Perrone, today Giorgio is a key member of The Connaught Bar team as well as an ambassador of world-class cocktail-making and hospitality. In December 2018, The Connaught and Ago designed an eponymous gin to mark the 10th anniversary of the iconic bar, and Giorgio played a key role in the development of this ultra-premium, in-house crafted gin, as well as in the ideation of the 2019 cocktail list Vanguard, consolidating even further his affiliation with Ago.

These days, you will find Giorgio mostly at the bar, entertaining his guests with his distinctive showmanship and passionate storytelling skills. Determined to make each drinking experience highly memorable, Giorgio never misses a chance to inspire the people around him, be these bar guests, colleagues or attendees to the numerous masterclasses and events he hosts all over the world. Having built an international reputation as a talented mixologist and host, Giorgio has recently reinforced some strong collaborations with great brands such as Martini and continuously travels the world to attend the industry's top outlets and shows. 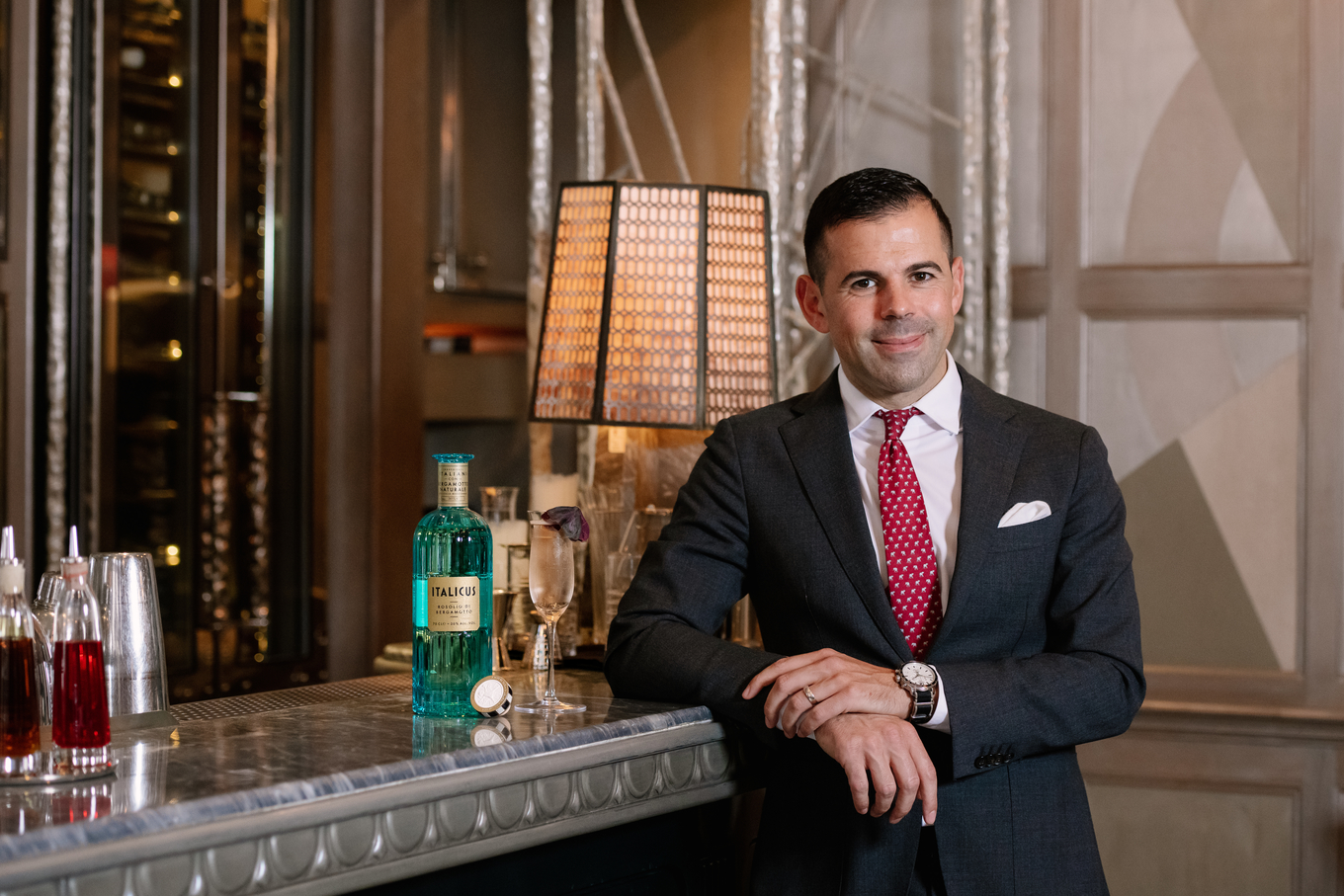 Ago Perrone, Director of Mixology at The Connaught Bar

Having collected the world's most sought-after accolades and being associated with having rewritten the rulebook on hotel bars, Ago Perrone is undoubtedly one of the most prominent figures on the mixology scene globally. Ago's unique and fine approach to hospitality and mixology has established his consistent international acclaim along the timeless and unbeaten popularity of London's Connaught Bar - which he heads since its 2008 opening.

Since moving to London from native Lake Como in 2003, Ago has marked the industry for introducing creative and gourmet cocktails with an elegant twist into the classic style service of The Connaught, triggering hotel bars to become approachable and exciting drinking destinations. Before revolutionising the bar scene with The Connaught Bar, Ago had already made a name for himself in the capital. With experiences such as Dusk in Battersea, followed by Notting Hill's Montgomery Place, Ago really had his chance to rise and shine, receiving accolades like CLASS Bartender of the Year in 2006.

In the meantime, Ago had also started travelling the world as an ambassador for Italian spirits brands to raise his profile internationally and had teamed up with three friends in Italy to launch the first Italian online magazine dedicated to mixology - www.Bartender.it - to inspire the local community of bartenders. It wasn't until 2008 though, that Ago was approached by the management of The Connaught Hotel to run the new Connaught Bar and make it what today is referred to as one of the world's top cocktail and hospitality destinations.

Strong advocate of offering guests a highly personalised experience, along a perfect balance of taste tradition and innovation, Ago's contribution to the industry over the past 10 years has been invaluable and prized with an endless list of personal awards which add to the recognitions attributed to the Connaught Bar under his drive. Following the much coveted Heering Legend of the List award at The World's 50 Best Bars 2018 - prizing the Connaught for making the list consistently for nine years on the spin - the bar also celebrated its 10th anniversary. To mark the special occasion, the hotel and Ago decided to launch an iconic eponymous gin. Designed and crafted in-house with a singular selection of botanicals, the Connaught Bar gin encapsulates the distinctive blend of style, craftsmanship and creativity that the Ago and the team have been standing for since the inception of the venue.

Taking inspiration from travels and personal encounters with people all over the world, Ago develops drinks with a story that go beyond flavour and immerse guests into engaging narratives. Working with different brands and suppliers who often create bespoke ingredients for The Connaught Bar, Ago adds to his unique cocktail-making flair an element of uniqueness.

Today, you can find Ago at The Connaught Bar, where guests arrive from every corner of the world to be served his famed Martinis. He continues to travel the globe, collaborating with top luxury brands, giving trainings, talks and collaborating with first-class personalities of the food and drink industry. Ago's recipes and interviews are featured in a-list press and books in the UK and internationally, being testament to his game changing role in the drinks industry.

The Shape of Silence

Created by Giorgio Bargiani, Head Mixologist, and Ago Perrone, Director of Mixology, at The Connaught Bar, London 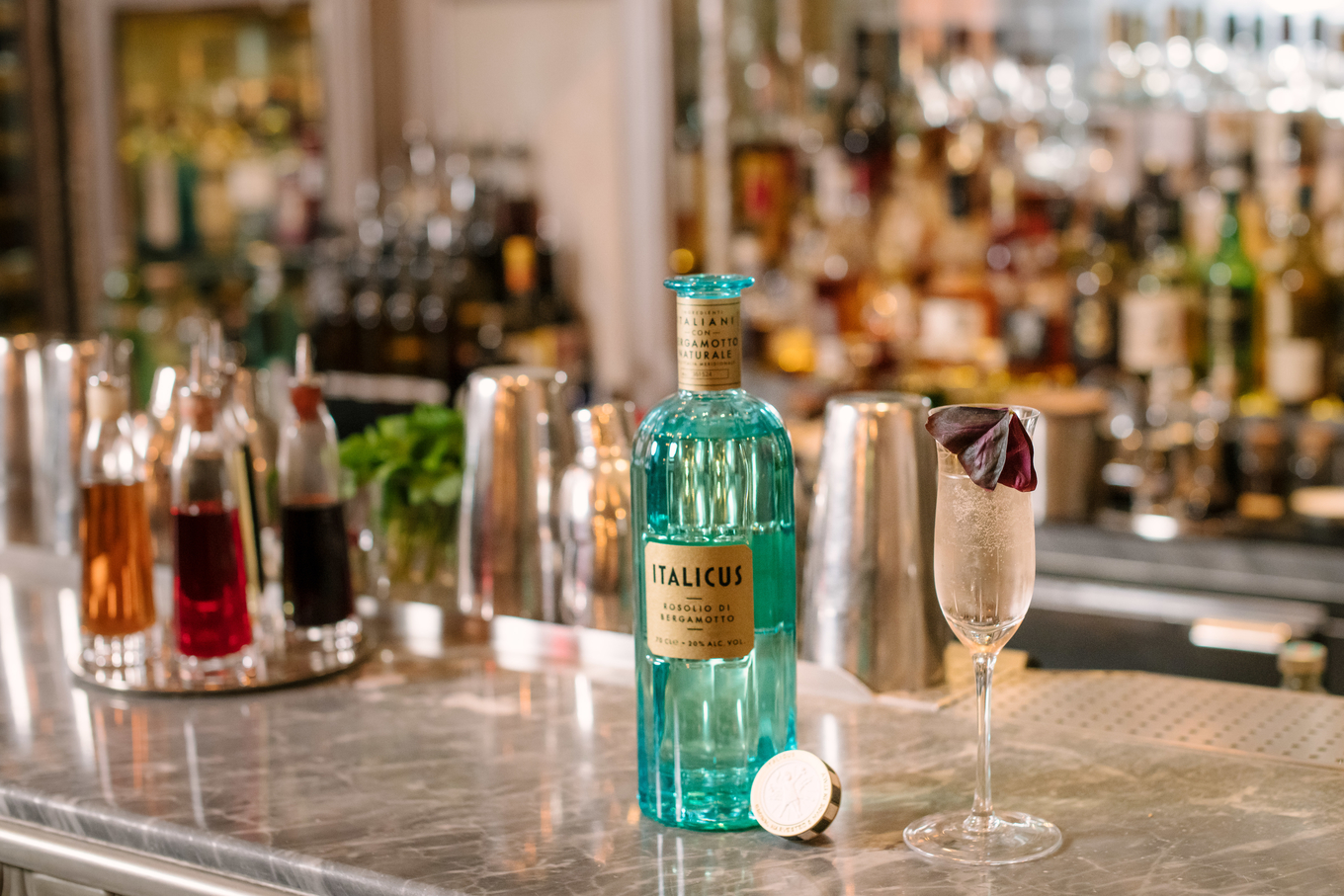 Method:
Stir and strain over ice and poured in a champagne flute. Garnish with a butterfly sorrel.

Inspiration:
This cocktail encapsulates the unique feeling that you come across when approaching and then walking into the Connaught. 12 years ago, at the entrance to the hotel was installed a spellbinding work of art: Silence, by the Japanese architect and artist Tadao Ando. The peaceful fountain that has long greeted guests with its colourscape, tree centrepiece and delicate mist, also inspired Ago Perrone, Giorgio Bargiani and the Connaught Bar team of mixologists to create this hallmark cocktail. The result is a genlty floral and earthy blend that embodies the iconicity of the Mayfair venue while taking guests on a journey of flavours and aromas from different corners of the world.