How Tanduay rum is made

The making of Tanduay rum starts in the sugar cane fields of Negros Occidental, the largest area of sugar production in the Philippines. This gives Tanduay unique access to the quality A-grade molasses from which their rums are made.

The making of Tanduay rum starts in the sugar cane fields of Negros Occidental, the largest area of sugar production in the Philippines with the largest sugar millers and refineries. This gives Tanduay unique access to the quality A-grade molasses with which their rums are made.

The Philippines has been influenced by many cultures but the Spanish colonial period has had the greatest impact on the country's rums. Hence, Tanduay rums are traditionally Spanish in style, so light and sweet.

The onset of the Philippines' rainy season is the signal for its farmers to begin the arduous task of planting their crop heirloom sugarcane, a particular strain that comes from Asia and is a progenitor for most sugar cane grown around the world. The rich soil, warmth and rains provide the perfect environment for the crop to germinate and grow. It takes 10 to 12 months, towards the end of summer the year following planting, for the cane to reach a maturity ready for harvesting. 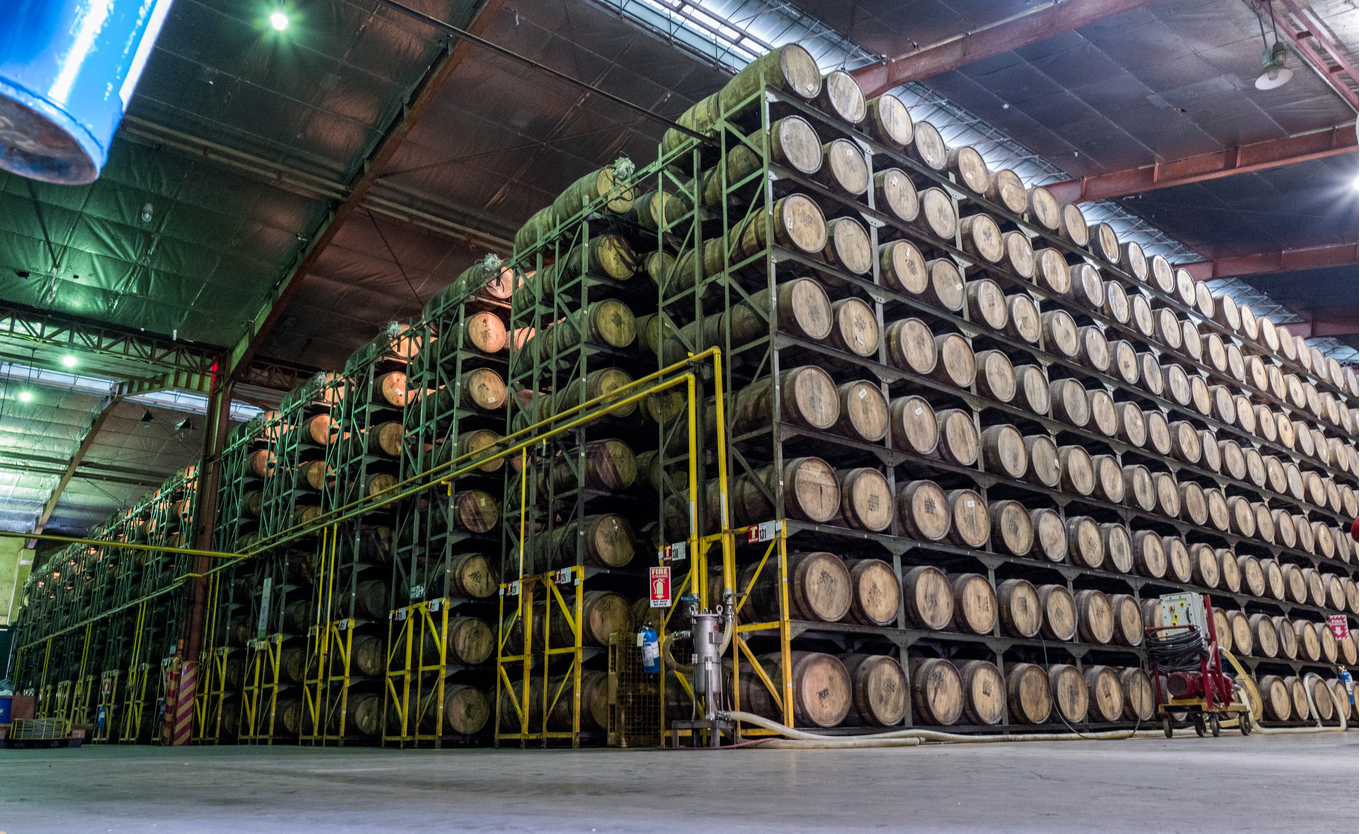 Although modern harvesting machines are used so is the traditional method of harvesting with lines of itinerant cane cutters (called sacadas) using long-bladed knives, known as espading (borrowed from the Spanish word 'espada', meaning sword) to cut and clean the leaves from the canes. 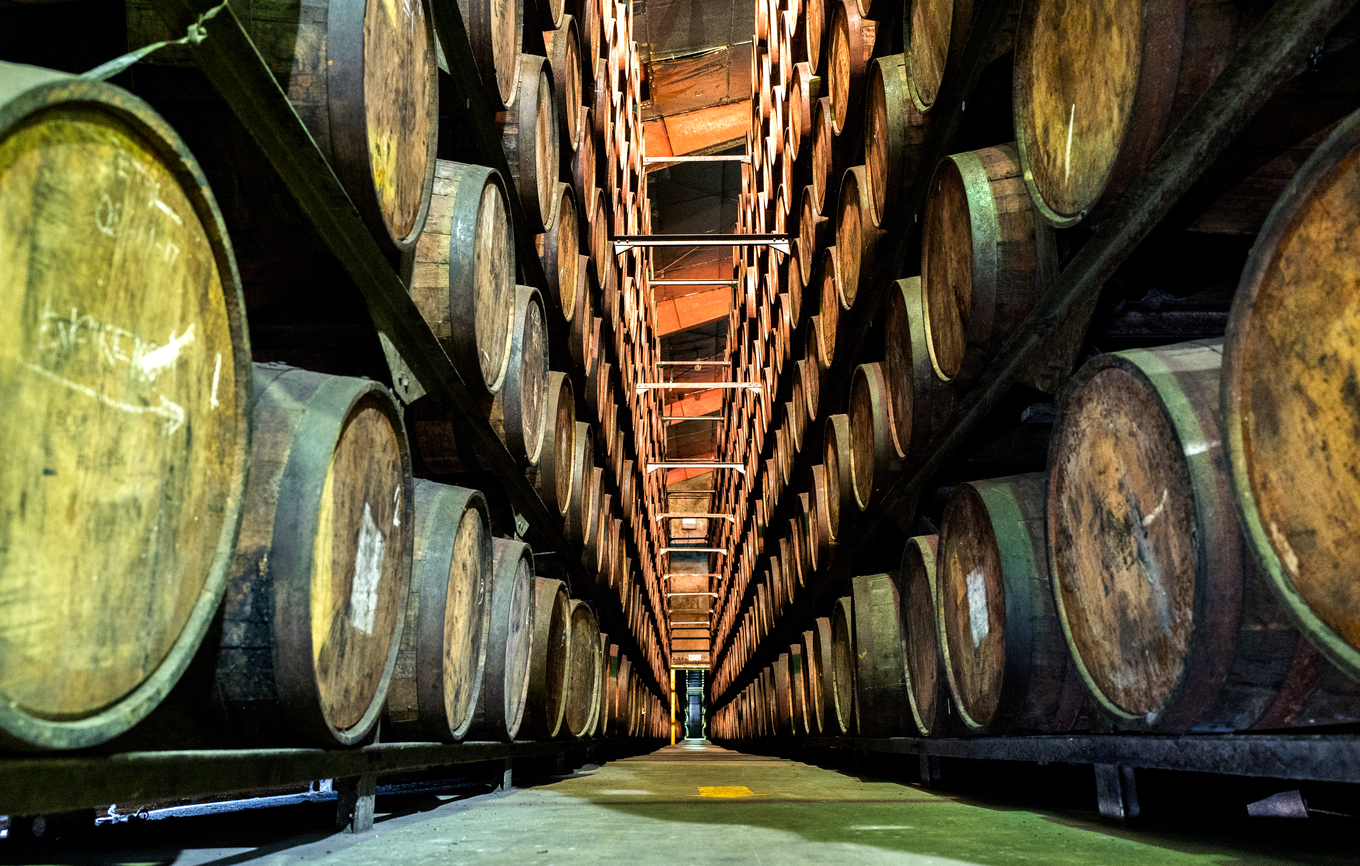 The cut canes are transported to Tanduay's in-house sugar mill where they are cleaned stripped of any leaves and crushed (using a roller mill) to release their sugary juice (with a Brix level of around 18°). This is refined to produce sugar by successive evaporation, crystallisation and centrifugation. Both the sugar extraction and sugar refining processes yield a by-product. Molasses Each step o these processes produce specific grades of molasses.

Unlike other rum producers, Tanduay only uses first syrup molasses, commonly known as Grade A molasses and this is the key ingredient in making Tanduay rum.

Grade A molasses are extracted from the initial boil and these molasses contain the highest sugar content (approx. 85° Brix) and the best flavour. As well as a high sucrose level, around 32-42%, along with glucose and fructose, the total fermentable sugars in the molasses is around 55% weight by volume.

The molasses are then fermented and this process turns the sugars into alcohol creating a ferment ready for distillation. Only Saccharomyes cerevisiae yeast is used without any other bacteria inoculant. The yeast is cultivated and maintained as a pure strain in Tanduay's own laboratory.

Standard fermentation time is 24 to 30 hours at a controlled temperature of 35 - 38° via a heat exchanger with water as the cooling medium. The use of closed-top fermenters allows CO2 capture. 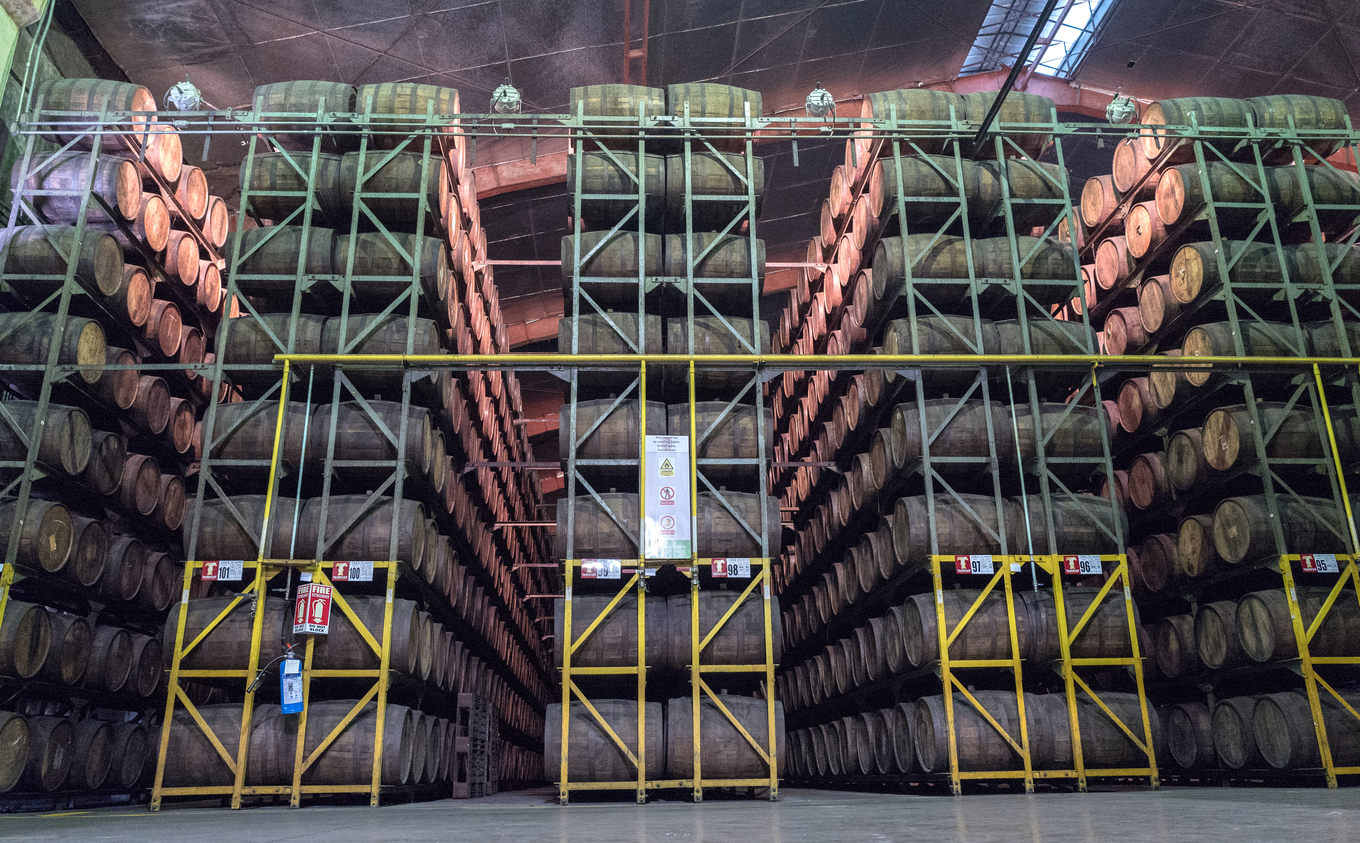 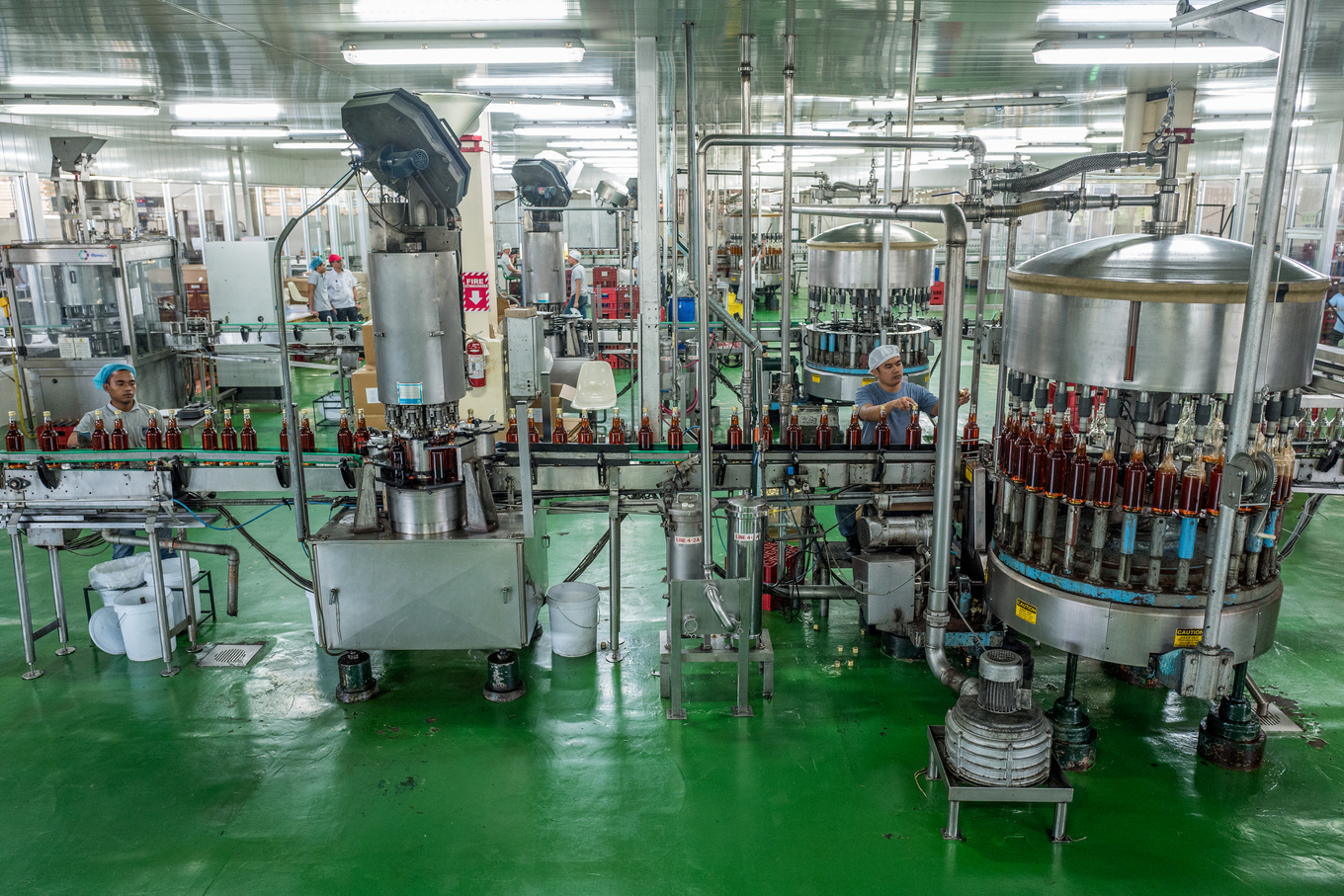 These distilleries continue the tradition of the original decommissioned distillery in Manila. Tanduay's distilleries in Negros Occidental and Luzon and handle the refining and distillation of the fermented molasses into a clear cane spirit that will be matured to produce Tanduay rum.

The heads and tails removed during rectification are sold to vinegar producers or burned to power the boiler.

Tanduay employs two types of maturation, both in 200 litre American oak ex-Kentucky bourbon barrels with a No.4 "Alligator" char:
- Single barrel ageing with rows of individual barrels filled and left for their contents to mature.
- Solera ageing with the ageing spirit moved through a series of Kentucky bourbon barrels that are never emptied, so sustaining "flavours that live on through generations" and contributes to consistency.

Due to the tropical climate, the annual evaporation (angel's share) is 5 – 7% compared to a mere 2% in colder climates). The country's ideal humidity and the altitude of the ageing warehouses also contribute to the character of the rum. 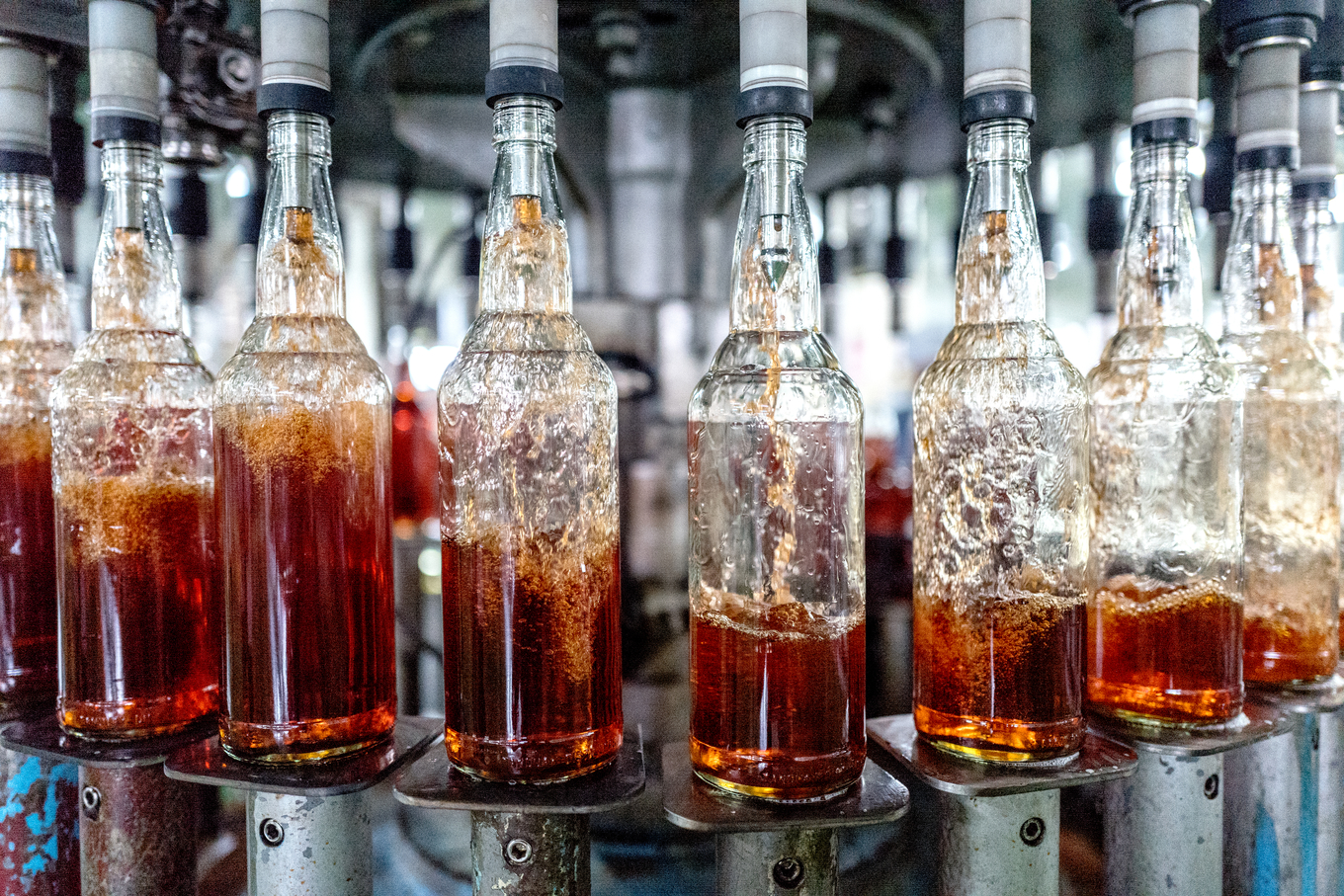 Tanduay Silver Asian Rum
A white rum blended from rums aged up to 5 years and charcoal filtered to produce a clean rum with a pale straw yellow hue.

Tanduay Double Rum
A dark rum blended from rums aged for 16 and 5 years married in ex-bourbon barrels for two years.

Especia
A spiced rum blended from rums aged up to 7 years in ex-bourbon barrels with infused spices.

After blending and a marrying period. The rums are chill-filtered to remove fatty acids which could cause the rum to turn hazy, especially in cold temperatures. Between 0% and 0.08% caramel colour is added to Tanduay Double Rum to achieve consistency in colour between batches.

Tanduay's distilleries produce biogas (methane) which is used in place of fossil fuels in power generation and to produce the steam used in the distilling process. The wastewater continuing molasses and yeast particles produced from the fermentation and distillation processes is spread as a fertiliser on the sugarcane fields. 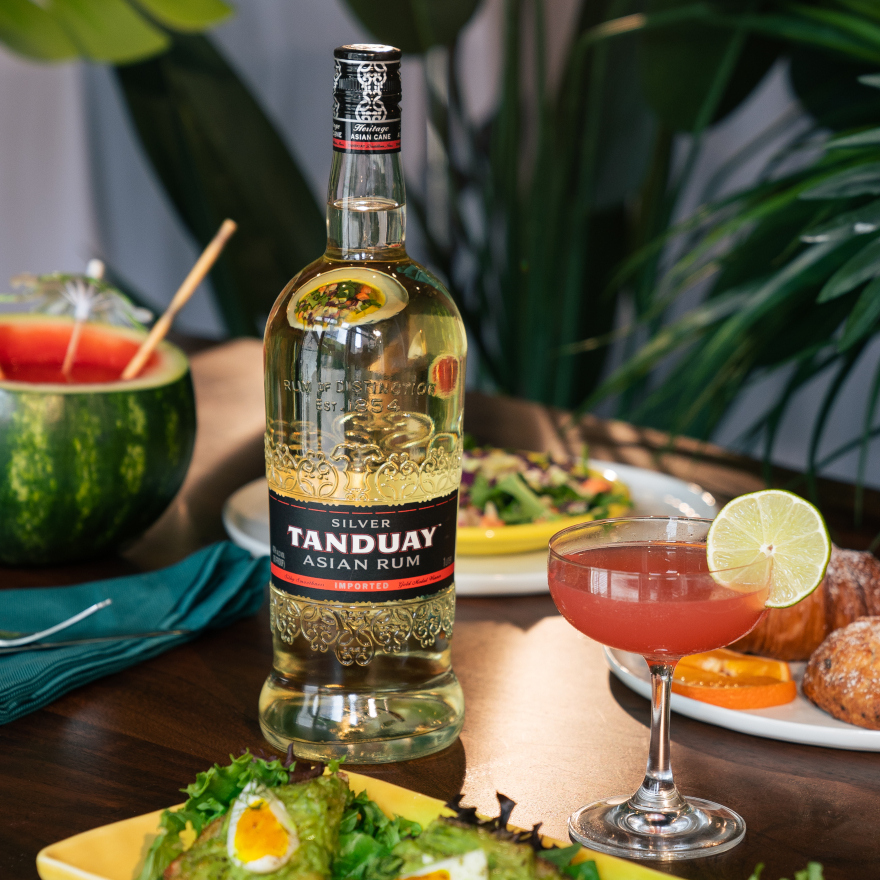 A Blend of rums aged up to 5 years in ex-bourbon barrels, Tanduay Silver rum is distilled in the Philipines from fermented locally grown and processed 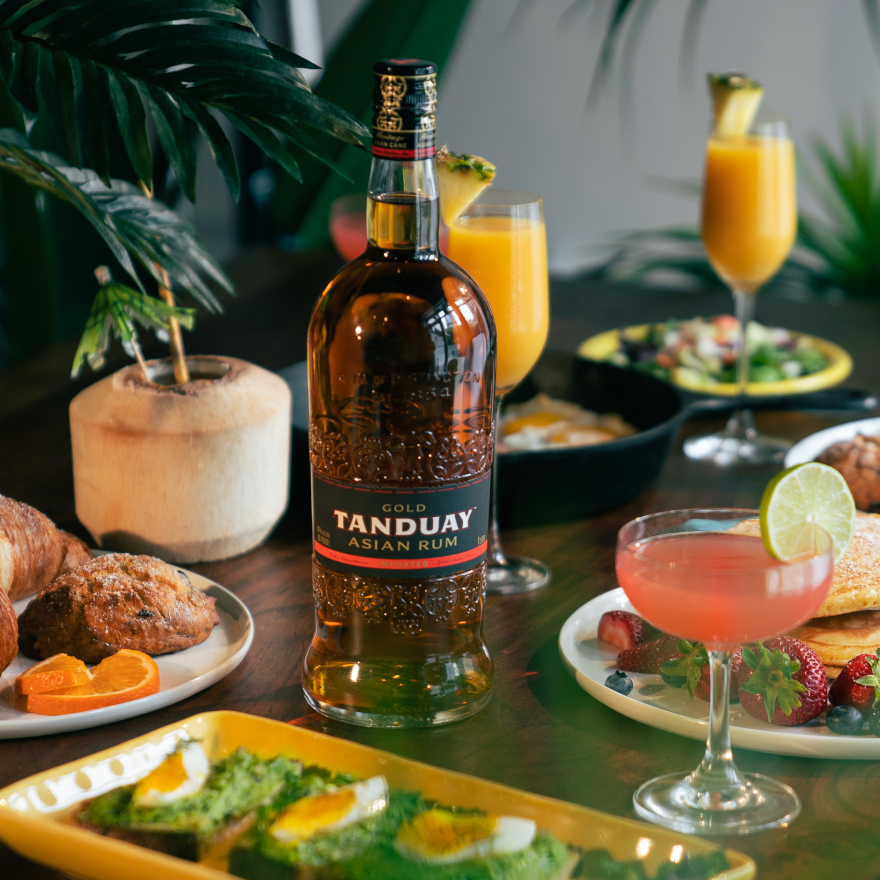 A blend of rums aged up to 7 years in ex-bourbon barrels, Tanduay Gold rum is distilled in the Philipines from fermented heritage sugarcane molasses. 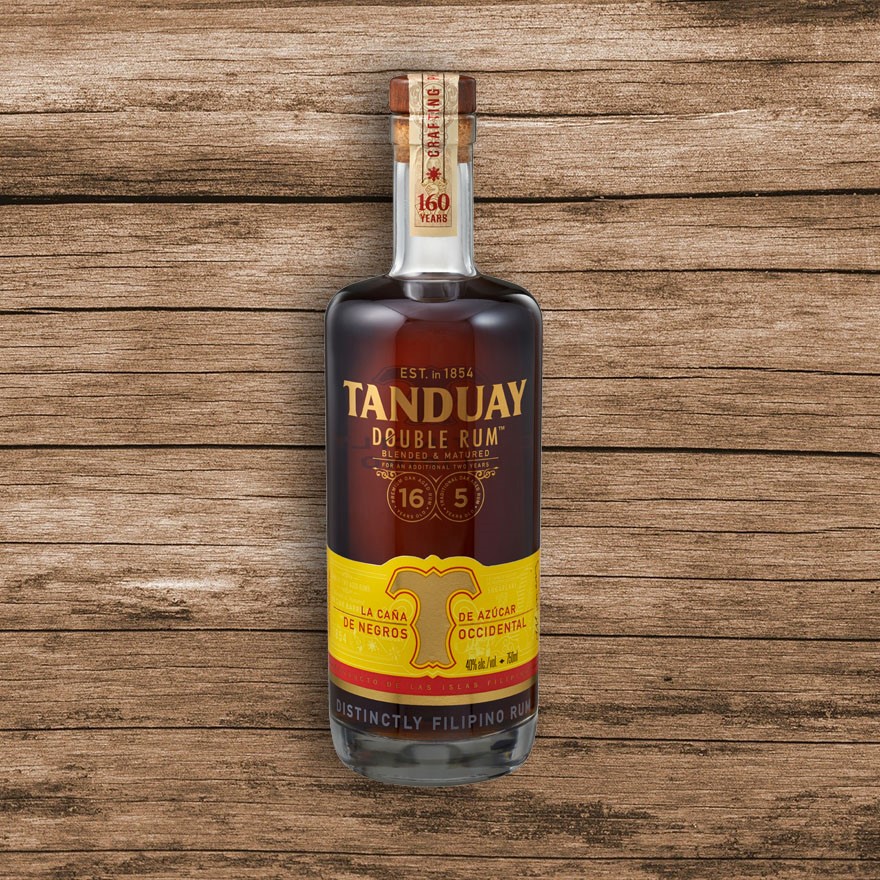 As the Double Rum name suggests, this is a blend of two rums, one aged for 5 years and the other 16 years. After blending these are married in an ex-bourbon