Auchentoshan, meaning 'corner of the field' in Gaelic and pronounced ‘Ock-Un-Tosh-Un’ was established in 1823 by John Bullock - a local corn merchant who went bust just five years later.

His son, Archibald took over but similarly went bankrupt the following year. In 1834, the distillery was sold to John Hart (Bullock’s distiller) and a local farmer Alexander Filshie. One of the conditions of sale was that John Bullock be allowed to live out his days rent-free on the distillery grounds. It turned out to be a well negotiated deal as he lived to the ripe old age of 87.

Auchentoshan remained in the ownership of Filshie’s family for 44 years before a disastrous harvest forced them to sell C.H. Curtis & Company in 1877, just two years after they had invested in rebuilding the distillery. C.H. Curtis, a firm of Greenock based whisky merchants ran Auchentoshan until 1900. The distillery changed hands again in 1903 when it was bought by John & George MacLachlan - Glaswegian brewers and distillers who also operated a thriving wine and spirits business.

The early part of the 20th century saw Glasgow become an industrial powerhouse and the area around the distillery grew to become the industrial town of Clydebank with the nearby Clyde shipyards being amongst the busiest in Europe.

Production ceased for the duration of the Second World War during which time German bombs targeted the Clyde’s shipyards and over 1,000 local people were killed. In order to protect the shipyards the A82 which runs past the distillery was made to look like the River. With the aid of strategically placed lights and props, the long river of Tarmac viewed from high above by an unsuspecting German bomber, did indeed look like the Clyde.

The rouse worked but while it helped protect the docks it put Auchentoshan directly in the path of the bombs. Only seven properties in the area survived unscathed, remarkably Auchentoshan distillery was one of them, although three warehouses and over a million litres of whisky were lost.

Many books I have read on Auchentoshan recount the tale that one bomb made a crater so large that it formed the pond now used as a reservoir for the distillery’s cooling water. This is just a fanciful tale put about by one of the last distillers who it would appear never let the truth get the way of one of his good stories. Old photographs show that the distilleries lake was actually larger before the war and it was subsequently pushed back behind the present dam. However, it is reported that a couple of bombs did indeed land in the pond and their remains probably sit in the silt at the bottom to this day.

Production resumed in 1948 and in 1960 Auchentoshan was bought by J&R Tennent, the famous Glaswegian brewers. By 1969 Tennents itself had been taken over by Charrington and the distillery was sold to Eadie Cairns Limited, a local hotel and restaurant operating company. Soon after the acquisition the company made Auchentoshan widely available as a single malt for the first time, primarily promoting its sale through its own outlets. Auchentoshan began to gain a reputation as a single malt in its own right, rather than just being a blending malt.

In 1984 Auchentoshan was bought by whisky blenders Stanley P. Morrison, now known as Morrison Bowmore Distillers Ltd which in turn was bought by its present owners Suntory, the Japanese whisky distillers in 1994. 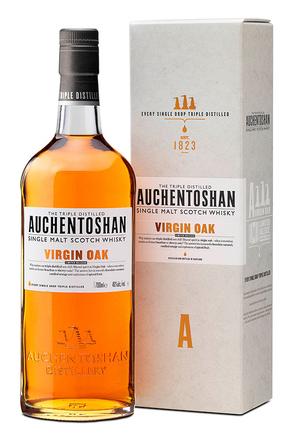 Auchentoshan Valinch is the non chill-filtered, cask strength edition of Auchentoshan Classic, and this is the first of... 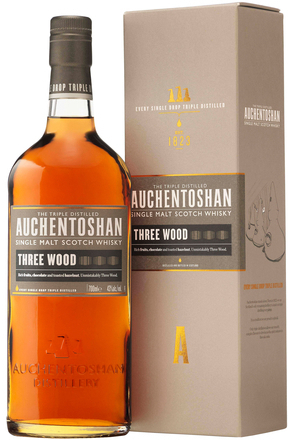 Launched in 1998, ‘Three Wood’ is a reference to this expression being made from whisky aged in a mix of ex-bourbon,...

Matured solely in American bourbon casks. Auchentoshan Classic has no age declaration but is generally matured 5 to 8...

Released as a permanent addition to the Auchentoshan range in October 2014, this triple distilled Lowland single malt is...

Aged for over 21 years in American ex-bourbon and Spanish ex-sherry casks this Scotch as been compared to a summer on a...

This 11 year old limited edition of 3,600 bottles is the first release of this Lowland malt matured exclusively (rather... 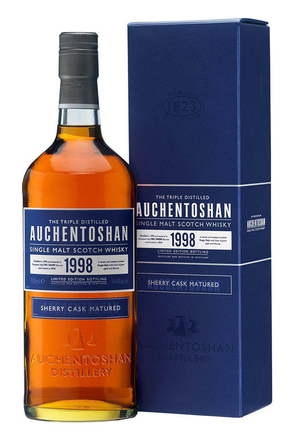 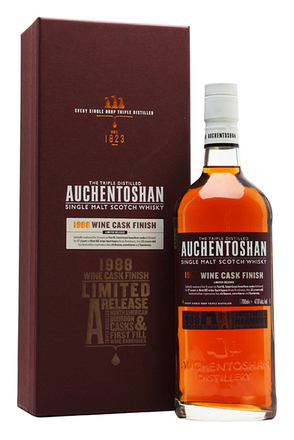 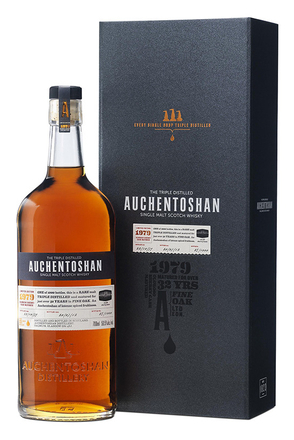