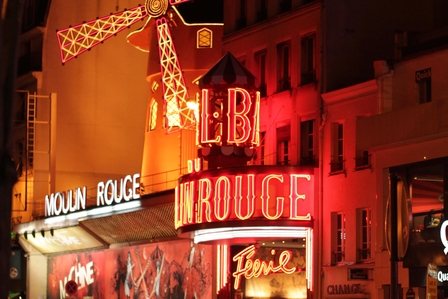 To the world’s eye, Paris is the symbol of culture, gastronomy, fashion, design and a certain way of life: freedom and hedonism. Though the city is proud of its history and architecture, it doesn’t linger on the past and strives for new trends and innovation. The eastern part of Paris is at the heart of this new generation of influencers, far from the bourgeois style of Rive Gauche.

Today, Paris's bar scene has nothing to envy to London, Berlin or Copenhagen. On the contrary, Parisian mixology is effervescent, creative and provides quality cocktails. Since the revival of cocktails in 2007, with the irrepressible three guys behind Experimental Cocktail Club, the capital has seen the launch of cocktail places every month, offering high quality drinks.

Following the New York speakeasy trend, bartenders developed multiple concepts to attract a more and more expert audience. Most mixology spots are located in the Marais, Pigalle and Sentier. Rum centered, whisky centered or mezcal centered, New Orleans style, foodpairing, bar and restaurant... The new generation of Parisian bartenders has travelled abroad, met colleagues or worked in other countries and taken part in world class competitions. They're the new French touch, the "Do it the French way" as suggested by the major alcohol company Pernod.

Now mixology has been reborn, the Paris scene now focuses on its French heritage, like the liquors and bitters (absinthe, Suze...), to create amazing new cocktails. After 100 year ban, a distillery now opened in the city, "Distillerie de Paris" thanks to Nicolas Julhès, producing gin, vodka, malt, rum and brandy.... All of which are used by many Parisian bartenders.

Moreover, the rise of mixology has other pioneers, outside the bars: the Liquid Liquid agency, Thierry Daniel and Eric Fossard created the Cocktails Spirits event seven years ago made their mark on the cocktail scene. In January 2015, they launched the Paris Cocktails Week, just as Simon Difford did in London in 2009. One week, once a year, to bring the cocktail scene to the general audience thanks to special fares, masterclasses... This first week proved cocktails to be a hit!

Mabel
Hidden behind a food bar specialized in grilled cheeses, this cocktail bar looks like a speakeasy but with cosy and contemporary decor. Each drink on the menu (17 creations with rum, mezcal, port, gin...) tells a story. Many are made using homemade products, mostly organic, which is very rare in Paris. Mabel specialises in rums, offering a range of over 110. 5/5
58 rue d'Aboukir, 75002

Maria Loca
Designed to look like a hacienda, Maria Loca is decorated with plenty of plants and paintings by young artists. You can feel the energy and the travellers' spirit here, especially on the spirits' menu which is heavily rum and cachaça influenced. Maria Loca's exotic spirit expands to the kitchen, with dishes such as pao de queijo or fish accras. 4.5/5
31 boulevard Henri IV 75004

Candelaria
If you stay just one night in Paris, Candelaria should be first on your list. The first Mexican style speakeasy since the new cocktail scene rose in Paris, and is the best spot to sip cocktails mixed with mezcal and tequila. Bartenders, such as Sébastien Gans mix quality cocktails and offer a selection of 60 agave spirits, including a selection of 45 tequilas. A Paris institution. 4.5/5
52 rue Saintonge, 75003

L'Experimental Cocktail Club
This place is where the new Paris cocktail scene was born, in 2007, thanks to three men, Olivier, Pierre-Charles and Romee. The "ECC" sits between a speakeasy and a classic NYC bar: no sign outside on the street, brick walls, designer lamps, comfy chairs, and designated area for the DJ. The large bar has seen the best bartenders in Paris work there: Carino Soto Velasquez, Nico de Soto, Michael Mas, Pierre-Marie Bisson, Gwladys Gublin and now the young and talented Maxime Potfer. 4.5/5
37 rue Saint-Sauveur, 75002

Castor Club
The cocktail bars based in "Rive Gauche" (left bank) can be counted on the fingers of one hand, still near Saint-Germain-des-Prés you can find one of the best places for drinks: Castor Club. Very incongruous in this chic area. Inside, a very cosy and narrow spot decorated in wood and deep green velvet. A weekends downstairs is party-like with a DJ, or take a seat near the bar and enjoy the cocktails while listening to vintage American music. 5/5
14 rue d'Hautefeuille, 75006

Le Bar du Bristol
The cocktail bar is one of the nicest spots in the Bristol: decor by prestigious craft companies made with fine woodworks, panther fabric covered sofas, a festival of chandeliers and an authentic fireplace. A chic and old school atmosphere. Yet, music videos projected on the extra-large mirror above the bar brings a touch of modernity. A DJ works every night to help create a very pleasant vibe, thanks to a jazz and swing playlist. 5/5
112, rue du faubourg Saint-Honoré, 75008

Café Moderne
Bastille is renowned for being the party district for the young and the hipsters to enjoy a beer or a mojito. Yet there, hidden on the rue Keller, is a place that looks like a mix between old Parisian café and American diner. There, you can drink the best cocktails served by one of the most talented bartenders in Paris. The Café Moderne is a family business: Thierry, the oldest worked a long time in prestigious restaurants in Paris while his younger brother and sister, Mido and Lucile, spent a few years in NYC. Café Moderne is also the best spot for meatballs in Paris. 5/5
19 rue Keller, Bastille, 75011

Gravity Bar
Located near the lovely canal Saint-Martin area, the Gravity Bar's concept is very innovative. The co-founder, Marc Longa was an artistic director for almost 20 years before opening this spot. But above all, Marc is an extreme sports fanatic. So he decided to adapt all the sports sensations into the design and the cocktails menu of the Gravity Bar. Hence the amazing ceiling built like a wooden wave and the large semi-circle lobby which looks like a big rock. 5/5
44 rue des Vinaigriers, 75010

Little Red Door
The speakeasy Little Red Door bar is referenced in the World's 50 Best bars for its top quality cocktails. However, the decor brings a homely feeling to the place, thanks to stone walls, comfy seats and dimmed lighting. This is the place to surprise your taste buds and challenge what you think mixology is. The Little Red Door also offers a great range of Irish and Japanese whiskies, and a choice of finger food. 4.5/5
60 rue Charlot, 75003

Sherry Butt
Sherry butts are often used for ageing whisky, this bars' speciality with 100 whiskies (including rare ones such as Hanyu), from Scotland to America, France, Japan or Ireland. Sherry Butt has two rooms: a sort of vintage living room, and a large lobby surrounded by club sofas. A dozen cocktails are chalked up on the wall. The house rules are: different alcohols for each cocktail; 11 homemade syrups; no infusion with spirits, but with aperitif as in Byrrh with cardamom or Grand Marnier with wakame and coco. 4.5/5
20 rue Beautreillis, 75004

Le Syndicat
This spot, in the most fashionable street of the 10th arrondissement, is not easy to find, its facade is hidden by being plastered with music posters. Inside, the decoration follows the same theme. The cocktails list is divided in three sections: Flight (degustation of French old liquors and eaux-de-vie), Syndicat Classiques (classic cocktails revisited with French spirits) and Insane Saint Denis style (creations with French spirits. 4.5/5
51 rue du Faubourg Saint-Denis 75010

Other Parisian cocktail bars of note by Simon Difford

Artisan
The name of this warmly lit, inviting little bar neatly sums up the style of the excellent cocktails, spirits and food served here. Artisan is a great place to grab a snack and a drink. However, be warned, this is a popular but small place and they don't take reservations. 4.5/5
14 rue Bochart de Saron, 75009

Bar Hemingway
A legendary bar that has been home to Cole Porter, F. Scott Fitzgerald, Gary Cooper and of course the eponymous Ernest Hemingway and is now home to the renowned Head Barman, Colin Field. It's classic, upscale and expensive - would you expect anything less of the Ritz?
Ritz Hotel, 15 Place Vendôme, 75001

Lulu White
The talented and largely English bar team here will make you feel right at home in Lulu White's boudoir. A boudoir of some renown, for the Lulu (1868-1931) after which this bar takes its name was a New Orleans African-American brothel madam during the Storyville period. 4.5/5
12 Rue Frochot, Pigalle, 75009

Buddha Bar
If you've never been to a Buddha Bar, you've probably listened to its chilled ambient music at some point - a fantastic example of a brand extension if nothing else. This lost temple to decadence may not be the hip 'must visit' venue it once was but we've enjoyed both the ambiance, food and drinks served in its gallery bar. 4.5/5
8 Rue Boissy d'Anglais, 75008

Harry's New York Bar
Harry MacElhone established this bar in 1911, making it Europe's second longest-running cocktail bar. Passing through the swinging, wooden saloon-style doors is a step back in time. Harry's is best summed up as having a British pub-style atmosphere but being a place where people come to drink cocktails rather than beer or wine. 4/5
5 Rue Daunou (btwn Ave de l'Opéra & Rue de la Paix), 75002 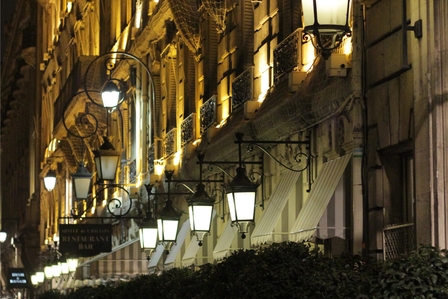 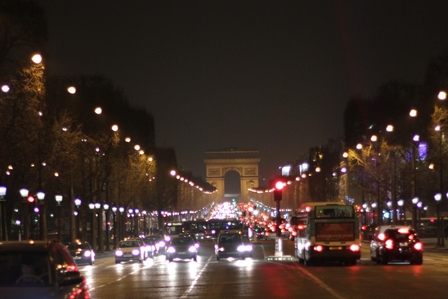 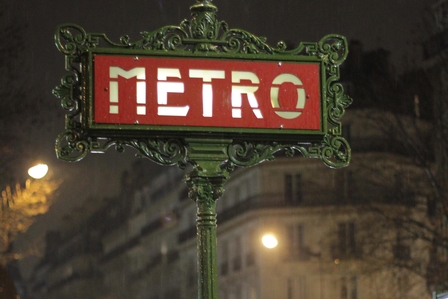