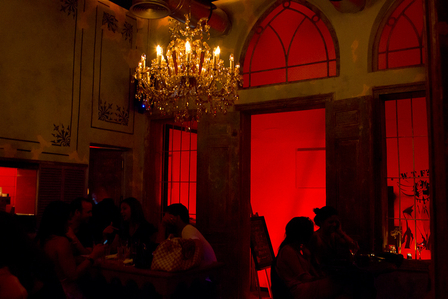 Once known as the Paris of the East, the capital of war-torn Lebanon still retains a surreal beauty, even though parts of it have been rebuilt twice in the last decade, and there's still work ongoing from the last Israeli bombing campaign in 2006. It is a city of contradictions and diversity on the edge of a world that might appear to tolerate neither of these.

As a result life feels it's being lived to its fullest and frankly, we defy anyone in possession of a pulse and an appetite for fun not to have an absolutely amazing time in this cosmopolitan whirl, especially during summer when the rooftops and beach clubs open up, even as some winter hotspots migrate up the coast to the party towns of Jounieh and Byblos.

Beirutis eat late, generally after 10pm, and during summer many bars and clubs stay open until dawn or even beyond. Although sections of Lebanese society are extremely conservative (homosexuality remains illegal, although some places run gay club nights and there is a thriving undercover gay scene), central Beirut is fundamentally a cosmopolitan, sophisticated world city with world renowned galleries, museums and universities.
There are few tough doors in Beirut, but women should wear make-up, while both sexes should avoid flip-flops or generally looking like a tourist. You will need reservations to eat or score tables at upscale venues over the weekend.

Just as in nearby Tel Aviv, women can wear pretty much what they want and the indie boutiques in Hamra and Achrafiyeh, not to mention the designer malls in Solidere and Verdun, are full of skimpy outfits.

Most of central Beirut is easy enough to navigate on foot although traffic is crazy, and, due to erratic street signage, you may find yourself asking for directions more often than you'd like: luckily most educated Beirutis speak English, French and Arabic fluently, and often mix all three.

Dollars and Lebanese Pounds are used interchangeably: it's not unusual to get change in a mixture of currencies. While some places do take credit cards, and international ATMs are plentiful, you would be wise to carry cash for the night out.

Not all cab drivers speak or read English, so it's good to carry a card for your hotel and have the right change for your fare. Some taxis can be shared ("service" - say "sairrveess"), so don't be shy to flag taxis with a fare already in them if empty cabs are thin on the ground. Haggle and agree the fare in advance, though when coming from the airport this can mean nothing in practice, and be selective about the age of the vehicle you get into.

It's a while since we've visited Beirut - hence the lack of a list of recommended bars on this page. So we are looking for a drinks brand with people in this city who we can work with to put together, and keep updated, a list of truly great bars worth visiting. If you consider yourself in this position then please email simon@diffordsguide.com.