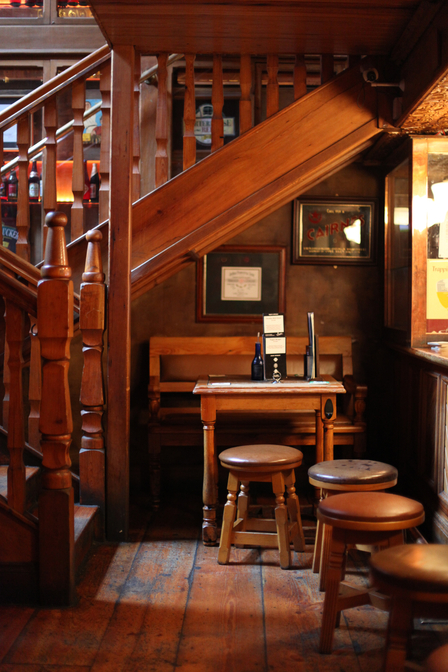 The Irish are famous for their warmth, hospitality and a good craic, qualities much evident in a good Irish pub. The Dublin originals remain special places, quite different to the Irish pub brand exported to cities around the world. Besides its quintessential pubs, Dublin now also boasts a growing number of refined cocktail lounges and craft beer bars.

Originally founded as a Viking settlement, Dublin has developed around the wide sweep of Dublin Bay and is divided in two by the River Liffey. Its name comes from 'Dubh Linn', meaning 'Black Pool', a reference to a lake once connected to Liffey which was used by the Vikings to moor their ships. Dublin is the capital of Ireland and is its largest city.

From the late 1990s until the recent economic contraction, Dublin was at the centre of phenomenal economic growth which led to Ireland being nicknamed the 'Celtic Tiger'. In 2008, Dublin was listed as the fifth-richest city in the world. Sadly it was a story of boom to bust and the country experienced one of the deepest recessions in Europe. The city's bar and restaurant scene were not spared its effects but thankfully times are better and new bars are springing up across the city.

I've found the Irish climate tends to be moist but apparently Dublin enjoys mild winters, cool summers and even moderate rainfall. Dublin has less than half the average rainfall as the west of Ireland, and although I find this hard to believe, apparently has fewer rainy days than London, New York City and even Dallas.

The city's many famous pubs have helped make Dublin one of the world's most renowned drinking cities with iconic brands such as Guinness and Jameson contributing to the city's drinking notoriety. This attracts hordes of exuberant tourists enjoying the bars around the pedestrianised Temple Bar area and at the weekends a truly unbelievable number of hen and stag parties. However, perhaps thinking of tourist Euros, the locals don't seem to mind the invasion. Indeed, many of Dublin's 'style bars' are built on such a scale that it's difficult to see how they'd remain in business without the hens and stags.

Almost 260 years ago, on 24th September 1759, Arthur Guinness took over a disused brewery at St. James's Gate, Dublin. His stout and the city are now virtually intertwined and you'll be pushed to find a Dublin bar that doesn't sell Guinness - most will claim that theirs is the best pint in town.

It's rude to visit Dublin and not order at least a half of Guinness and if indeed it is only a half-pint you're after then simply ask for "a glass please", and not "a half pint". Novice Guinness drinkers should also be aware of the essential settling time between the first and second top up pour. Busy bars will line up pints ready to be topped with the second pour to save waiting time, otherwise be patient and don't think the bartender has forgotten you.

The other great Irish drinks export, whiskey (with an 'e'), has many different incarnations but with few notable exceptions, Irish whiskey tends to be unpeated and triple distilled. In May 2015, Teeling became the first distillery to distil whiskey in Dublin for 39 years and unlike the Old Jameson Distillery and the Guinness Store House tours, a visit to The Teeling Distillery allows you to see spirit running from the stills and learn directly from the distillers. Naturally there's a gift shop at the distillery but for bottles to take home you should also visit The Celtic Whiskey Shop at 27 Dawson Street, near St Stephen's Green. If you run short of shopping time then Dublin airport duty free also boasts a huge range of Irish whiskey and other spirits.

Below we recommend the Dublin pubs we thought glorious examples of a true Irish pub. Also, as you'd expect, we've sought out the city's very best cocktails bars.

The Palace Bar
Built in 1823, this is one of Dublin's best preserved original Victorian pubs with stained glass windows and a high alter-style mahogany back bar with Romanesque arches rising to the lofty ceiling. A privileged few are invited into the hidden snug at the front. 4/5
21 Fleet Street, Temple Bar

Brazen Head
Dublin's oldest pub sits behind a castle-like facade creating a cobbled stone courtyard with an almost medieval feel. Indeed there has been a tavern on this site since at least 1198. The present building dates back to 1668 when the original tavern was replaced with a coaching inn. It was extensively restored in 1988. 3.5/5
20 Bridge Street Lower, Temple Bar

Doheny & Nesbitt
Doheny & Nesbitts is a legendary bar and classic example of a Dublin pub in both its patrons and decor. Its front bar boasts original Victorian snugs, bare wooden floors, carved woodwork and whiskey branded mirrors. The large back sports lounge is plastered with memorabilia and on rugby days is packed and the atmosphere electric. 3.5/5
4-5 Lower Baggot Street (Nr St Stephen's Green)

John Kehoe
First licensed in 1803 and unchanged for generations, Kehoe's as its better known is one of Dublin's heritage pubs. Its charm and location on a key pedestrian route just off Grafton Street ensures it is always packed with locals and tourists alike. 3.5/5
9 South Anne Street

John Kavanagh (The Gravediggers)
Better known locally as 'The Gravediggers', Kavanagh's owes its nickname to being located next door to the gates to Glasnevin Cemetery, one of the largest in Europe with the graves of many of Ireland's most prominent figures. This most traditional of pubs is a taxi ride away from the centre of town but well worth the small fare. 3.5/5
1 Prospect Square, Glasnevin

The Long Hall
At first glance, the red striped blind over the doorway and painted window might suggest an American bar, but inside lies a real palace of an Irish pub. The interior is a forest of carved mahogany embellished with ornate cornices, globe lamps, cut glass chandeliers, polished brass and gilding. The Long Bar is something of a working museum but it has visitors and an atmosphere like no museum in the world. 3.5/5
31 South Great George's Street, Temple Bar

The Stag's Head
Skilled Victorian craftsman made this a spectacular pub and it is quite possibly Dublin's best preserved Victorian pub. Carved mahogany covers the walls, dividing panels and even the ceiling. Original mosaic marble floors, granite tables, ornate stained glass and cut glass lamps with the Stag's Head seemingly embossed, or carved on every surface. 3.5/5
1 Dame Court (off Dame Street)

Vintage Cocktail Club (VCC)
The vintage décor of VCC causes me to reminisce of teenage visits to my granny's - homely, safe and a tad chintzy with furnishings and décor harking back to the Victorian era. However, here, in place of granny's overly milky weak tea, a hardback book offers some 70 different cocktails from the past decades. 5+/5
15 Crown Alley (corner Cope St), Temple Bar

Upstairs Bar at Kinara Kitchen
This excellent little speakeasy is run by legendary Dublin bartender, Paul Lambert so is well worth the ten minute cab ride from central Dublin out to its suburbs. It is accessed via the 'delivery door' to the left of the upmarket Kinara Kitchen Pakistani restaurant. Press the buzzer and they'll come and find you. If you're lucky - there's no reservations and no standing - you'll be shown up the steep stairs to this lofty dimly lit lounge.
5/5
17 Ranelagh Village, The Triangle

The Blind Pig
Named after the police who turned a blind eye to the liquor rooms of the 1920s prohibition era, The Blind Pig is the second Dublin speakeasy brought to us by Paul Lambert, one of the most respected bartenders in the city (see Upstairs at Kinara Kitchen). As befits a speakeasy the Pig's entrance is hidden - as is its address. Visit theblindpig.ie and make a booking.
Wicklow Street, Dublin City Centre

Peruke and Periwig
Peruke and Periwig are names of the men's powdered wigs popular in the 17th and 18th centuries, and back in the 1900s the building that now houses this outstanding cocktail bar and restaurant was used by James Donoghue, a wig maker and merchant. Appropriately the bar's décor resembles how his shop around the corner on St Stephen's Green, might have looked. 4.5/5
31 Dawson Street (nr St Stephen's Green)

Opium
Opium is a vast place encompassing a lounge, pan-Asian restaurant, club and garden - Dublin's answer to London's Hakkasan. However, the cocktails served in the ground floor horseshoe-shaped bar are perhaps even better than at Hakkasan - both in choice and quality. 4.5/5
26 Wexford Street (nr St Stephen's Green)

Liquor Rooms
Lying in the bowels of The Clarence Hotel, famed due to its connections with U2's Bono and The Edge, The Liquor Rooms is a huge venue set across a series of four interconnecting rooms. The Liquor Rooms may have a dance floor and be set out on the scale of a night club but here cocktails are taken seriously, as testified by the line-up of bartending awards on the back bar. 4.5/5
7 Wellington Quay

37 Dawson Street
This sprawling space packs in four distinct bar areas, stretching back beneath a pressed tin ceiling to a dimly lit Whiskey Bar tucked away at the very rear of the building where the sounds of a baby grand set a different vibe to the more hectic bars at the front. There's no cocktail menu but they proudly boast "we can make anything" and in our experience they do indeed do a great job of making classics. 4/5
37 Dawson Street (nr St Stephen's Green)

Saba
Saba, meaning "happy meeting place" in Thai, is a contemporary restaurant and bar serving traditional Thai and Vietnamese cuisine. The bar at Saba has a reputation to live up to as its executive chef, Taweesak Trakoolwattana, previously cooked for the King and Queen of Thailand. 4/5
26-28 Clarendon Street (behind Westbury Hotel)

Soder + Ko
Sounding like the name of an Ikea book case, the gum metal grey and black interior of Söder + Ko does indeed have something of Scandinavian feel but the food is entirely Asian. Although a restaurant, drinkers just seeking the well-made cocktails are welcome.4/5
64 South Great George's Street

The Oval Office
You may be in Dublin, Ireland but you could just as easily be in Boston for this is the most American of American bars. Not the best cocktail bar in Dublin but it remains one of our favourites and a visit to the city is not compete without a meal at Shanahan's, the excellent steak house above. 4/5
Shanahan's Restaurant, 119 St. Stephen's Green