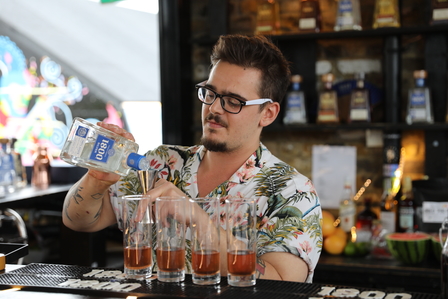 “My attention span is not incredible, so it’s very, very refreshing to be doing something different almost every day,” says Sam Boevey, the group head bartender at London Cocktail Club bar group and the 1800 Visionaries 2019 champion. “Every time I do a bar shift, I fall in love with it again. Being behind a bar is just fantastic.”

Since 2017, when Sam joined the opening team at LCC’s Liverpool Street venue, his career has rocketed. A determined apprentice, Sam attended every training class available. Within ten months, he moved through from barback to bartender to head bartender.

Sam's commitment to share his passion for bartending is evident. “My entire job now is training bartenders,” he explains. “If someone comes up to me and asks me what’s the primary difference between Irish whiskey and scotch, I have to be able to tell them…I love seeing people get excited about it.”

Growing up in Sydney, Australia, Sam's childhood home remains a core part of his identity. He describes many Australians as being “mutually respective of one another”, a philosophy which he continues to embrace.

After a move to Cambridge, England, Sam began his hospitality career as a barista. Alongside his day job, Sam worked as a live music sound engineer from the age of 16, spending many evenings in pubs and bars.

Besides playing the drums, bass, guitar and piano, Sam often seeks out new challenges. “I love hobbies and I love having projects, and creative outlets are the ultimate projects,” he says.

Following his 18th birthday, he took a year out with a friend. “We were going to go around Europe and do the classic, very cliché student gap year,” he says. They stayed in Turkey for three months going from east to west, which Sam describes as an incredible experience.

On his return, Sam enrolled at Nottingham University to study philosophy. His interests fell to logic and metaphysics which inspired two tattoos on his wrists. “I found it so compelling,” he explains. “Realising nothing is as simple as it appears.”

While studying, Sam poured pints at a student pub in Nottingham. During the summer, he picked up more shifts at cocktail bar Fat Cat. “I kind of fell in love with it because I had an amazing manager, just an incredible manager who really made me care,” he says. “I kind of got obsessed with the hospitality industry and the spirits business, learning about how they’re made, the history of them, the history of cocktails.”

Sam stumbled across a cocktail and flair bartending society at the university called FlairSoc. “I went to one event and within a week I was on their committee running their events,” he says. “I started running events every week where I talked about the history of cocktails and taught students how to make them in a bar called Hockley Arts Club in Nottingham.”

With growing passion, he wrote a cocktail book while revising for his final exams. “I did the design and content and it got published in collaboration with Nottingham University,” he recalls.

“I was so desperate to learn more about spirits and cocktails, I fell in love with it,” Sam explains. “I just wanted to write about it and I wanted to help other people learn about it. That was always my goal. I wanted to know myself and then be able to tell other people so they could learn and enjoy it as well.”

For Sam, it was joining the cocktail society which catapulted him into the world of bartending and steered him away from a master’s degree. He graduated with a first class degree in philosophy and moved to London to become a bartender. “I found London Cocktail Club and that was the [bar] I wanted to work in the most,” he says, but it was the training programme which also caught his attention, centred on progression and togetherness.

Sam was in the “middle of nowhere” in Wales when Hoppy, one of the owners of LCC, called to offer him the job. While he’s not a big believer in fate, he counts this moment as something rather special.

At first, his parents were sceptical. “But when I got the head bartender position and they found out what I was doing - being part of a massive community in London and there is huge potential for career progression and being able to work with so many interesting people - after that, I think they were very supportive,” he says.

As the group head bartender, Sam now bartends across all 11 sites, provides training and manages cocktail development. “I still work in the bars, still do full shifts with bartenders,” he explains. “I still love being behind a bar.”

A dedicated bartender, Sam considers a fun and supportive environment immensely rewarding. “The big highlight is the little things,” he says. “When someone asks me to come do a shift with them and I do, and they love it, that’s amazing.”

Sam was recently crowned the winner of the 1800 Visionaries Cocktail Competition. “There are bartenders who I have the utmost respect for who are able to enter every competition they see and still make amazing drinks for every single one,” he says but balancing bartending and the LCC training programme means he can only commit to a handful of competitions out there. “When there’s a special competition which catches my eye I’ll put everything into that.”

His winning cocktail, Ceci N'est Pas Un Cocktail, reflects his interests in metaphysical philosophy. “This is probably one of the first competitions I did it about something I genuinely, truly care about,” he says. “I’m learning more and more that when you have a personal connection to a drink, you put so much more into it.”

Besides drawing on Mexican signature flavours, such as tequila, chilli and mezcal, Sam used Aperol, a passionfruit kombucha and a pomegranate syrup.

For those interested in entering next year, Sam shares some words of wisdom. “The biggest issue with young bartenders, myself included, until I started doing them, was the fear of not winning,” he says. But for Sam, competitions are worth more than just the prize. They offer the opportunity to form relationships with other bartenders in the community. “I’ve lost many competitions, and I don’t really mind…but it’s amazing when you win!” he says.