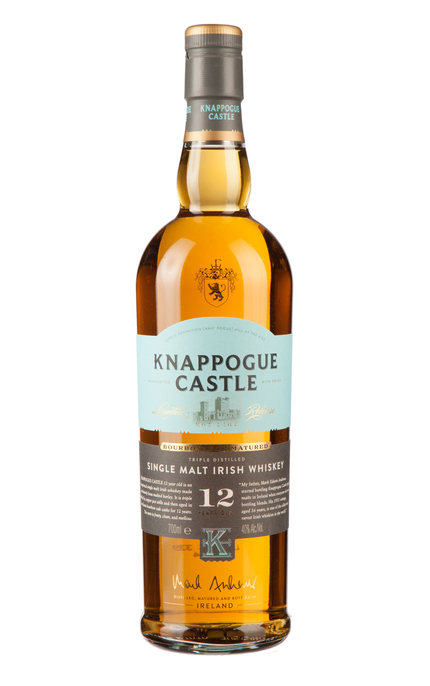 Produced by: The Old Bushmills Distillery Co. Ltd
Owned by: Castle Brands
UK distribution by: When We Are Giants
UK consumer PR by: Lion & Lamb Communications


Previously only available as vintage releases, this is the first blended age statement Knappogue Castle whiskey. Aged for 12 years in ex. bourbon barrels, this single malt Irish whiskey is thought to be produced at Bushmills Distillery.
A relatively small Irish whiskey brand (in 2016 around 8,000 cases across all tree expressions), Knappogue Castle is named after the beautiful 15th century castle built in 1467 by Sean MacNamara in County Clare, Ireland. The label features a black and white drawing of the castle. Incidentally, in Gaelic Knappogue (Nah’ Pogue) means hill of the kiss.

The 15th century castle in western Ireland, was restored by Mark Edwin Andrews and his wife, a prominent American architect, after they purchased it in 1965. At the castle Mark amassed an impressive and rare collection of casks of pure pot still and single malt whiskey; which he blended and bottled, naming the whiskey after the castle. Knappogue Castle 1951 vintage, the last bottling by Mark was aged for 36 years and is coveted by connoisseurs as one of the oldest and rarest commercially available Irish whiskeys.

Prior to the introduction of Knappogue Castle 12-year-old, the new range of Knappogue Castle was vintage dated, based on the year of distillation, and changed each year. Vintages included 1990, 1991, 1992, 1993, 1994, and 1995. The decision to change from vintage dates to age statements was made in order to present a more consistent range.

New packaging with aqua blue labels across the whole Knappogue Castle range, designed by Craig Mackinlay of Breeze Creative in Glasgow, Scotland, was released in May 2016 with every possible design component, including the shape of the bottle, fonts, label size, shape, copy and colour palate overhauled.