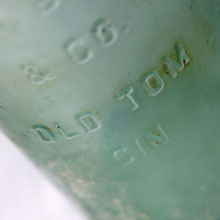 Often described as a sweet or 'cordial' style of gin, 'old tom' gins were overwhelmingly popular in the 18th and early 19th centuries, when gin was more

To make Tanqueray Old Tom Gin, the appropriately named Tom (he’s also ‘old’) uses third-party supplied neutral grain spirit to charge the ‘Old Tom' No. 4 copper pot still at Cameron Bridge with Tuscan juniper, angelica root, coriander and liquorice. Although the same botanicals as used in Tanqueray London Dry Gin, in this case they are used in greater proportion to the neutral spirit.

The botanical infused gin distillate produced from this distillation is then cut with column distilled ‘new make spirit’ which Diageo call ‘Coffey Sprit’ (a reference to Aeneas Coffey designing the first column still). Distilled from wheat, this is the same ‘new make’ usually aged and then blended with malt whisky to produce blended whiskies such as Johnnie Walker. The inclusion of flavoursome ‘new make’ in this Old Tom is intended to introduce some of the character that would have been in Charles Tanqueray’s original 1835 product due to the quality of the less rectified base alcohol available at the time. It also adds a fruity sweetness, which along with the liquorice used reduces the amount of beet sugar required in the final blend.

This blend is diluted back to bottling strength and at the same time sweetened with a syrup made by blending beet sugar powder with demineralised water and bore water. The addition of well water adds subtle flavours and textures.

The original Tanqueray Old Tom ceased production in 1921 and the label on this modern day interpretation is a replica of one of the last labels from the period in Diageo’s archive. The bottle from this period would have originally been tall and round as the now recognisable shaker-shaped bottle was not introduced until 1948.

This limited release of 100,000 bottles are individually numbered in lots, each with a prefix corresponding to the initials of a classic old tom cocktail as follows