Photography by Video highlights from Session 2, by Elliot Davies for The London Sessions

Joining us for session #5, all the way from New York, New York... Star of Hey Bartender, Principal Bartender at Employees Only, 2012 CWC Champion, three times Fastest Bartender Champion, Zagat's 2011 30 Under 30 NYC, we could go on... it's the one and only much lauded and highly acclaimed Mr. Steve Schneider

It's no surprise that the session booked up within minutes. We will have video highlights to share with you after the event on 10 October.

We are delighted to be hosting, all the way from San Francisco, the wonder that is Julio Bermejo. The creator of the Tommy's Margarita, Julio is the National Chamber of the Tequila Industry's Tequila Ambassador to the United States, and has been making cocktails at his family restaurant Tommy's since the age of 16.

Julio recently launched his Tequila brand L&J, named after himself and his wife Lily, whom Julio persued for 13 years after a fleeting meeting at the El Tesoro distillery in Arandas, Jalisco.

Julio's session will cover his love for Tequila (Tommy's has around 500 different bottles), Mexico, San Fransisco and his experiences running Tommy's (which turns 50 this year), followed by a Tequila and Tommy's Margarita tasting with a focus on Vintage Tequilas.

Our fourth session will be at El Nivel on Friday October 9th from 1pm - 3pm. Julio will be bringing some L&J Tequila, food will be provided by La Perla, and we are proud to announce Peroni Nastro Azzurro as our ongoing beer sponsor.

As anyone who has met Julio will testify, he is hospitality personified, making this a session not to be missed. 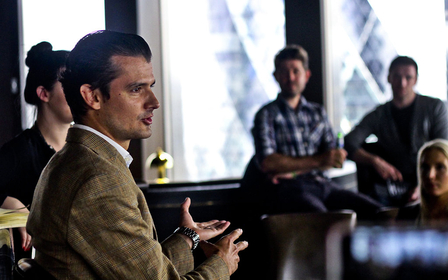 We're super excited to announce that the third of The London Sessions is with the formidable and very talented Erik Lorincz. You probably already know that Erik is the current (and 11th) Head Bartender at The American Bar at The Savoy, he won World Class in 2010, and in 2011 he was named Best International Bartender at Tales of The Cocktail. Erik recently launched his own line of cocktail shakers with Tetsuya Yokoyam 'Birdy by Erik Lorincz' and can be found presenting on Jamie Oliver's Drinks Tube.

But, you might not know that when Erik first arrived in the UK from his native Slovakia he couldn't speak much English and began his career in the London bar industry as a glass collector at Attica in Soho.

He also said these words, a philosophy that we really (really, really) agree with:

'Bartending for me means not only making a drink, it's a philosophy of etiquette, how to be a gentleman and how to treat your guests, not just making them a drink but making them a night to remember'

Erik's session is from 1pm - 3pm on Sunday September 13th at City Social, and guess what, it's already booked up. Next time, set your alarms and in the meantime we'll be showing a highlight video here on Difford's Guide.

We are more than delighted to be announcing our second session with none other than Tomas Estes. As well as being one of the London Sessions founders, Tomas is also known globally for his work with Agave, for which he has been recognised by the Mexican Government, as the American Ambassador of Tequila to Europe.

Tomas came of age in California in the 60's and opened his first restaurant, Café Pacifico, in Amsterdam almost 40 years ago and his most recent, El Nivel, in London last year. He is widely credited with bringing agave spirits to Europe and released Tequila Ocho in 2008, which is now available in over 14 countries, and on the back bars of the world's best venues. Tomas's first book, The Tequila Ambassador, was nominated for Best New Book at Tales of The Cocktail 2013, and currently retails on Amazon for over $1,000... So if you have a copy, keep it. Tomas has been awarded The Imbibe Chairman's Award, Theme's Life Time Achievement Award, and in 2008 was voted as the 6th most influential person in the bar industry.

But... You know that all already. What you might not have heard, are Tomas's tales of riding his Triumph topless and shoeless around Cali, how he came to meet Devil the chain smoking monkey, that time Hunter S Thompson was interviewed at Cafe Pacifico London, or what Freddie Mercury was doing at Cafe Pacifico Amsterdam.

Tomas's session is being held at one of our favourite venues, El Nivel, on August 10th from 1pm. As with all the sessions, entry is free but very limited, and will come with a few surprises. There's only two ways to get on the list - email us from Monday 20th at 12pm (emails sent before this date and time will not be counted), or via Difford's Guide, to whom we have given 5 pairs of tickets - see above. 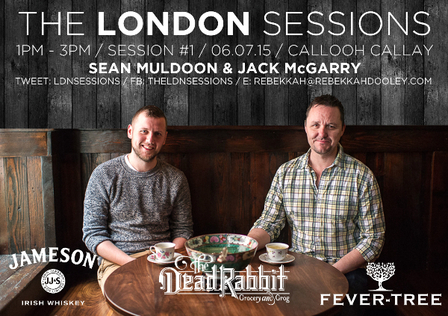 The sessions will be launching in style, with hosts Jack McGarry and Sean Muldoon who are coming to London from New York especially for the occasion.

Co-founders of the world renowned and celebrated Dead Rabbit, New York, Jack and Sean have won eight Tales of the Cocktail Spirited Awards between them (that's so far - they are also finalists in the Best American Bar Team and Best Cocktail Menu categories in the 2015 Spirited Awards, winners to be announced in July). Their story, from the Merchant Hotel in Belfast to the Dead Rabbit is guaranteed to be fascinating and inspiring.

I first met Jack and Sean way back in 2009 at their bar at the Merchant Hotel when I was involved in the Connoisseurs Club which was established to share experiences within the drinks industry (sound familiar?). I've followed their journey and success ever since and I much admire what they've achieved.

So, if you're one of the lucky ones to be going along, enjoy and make the most of the time you have with Sean and Jack. For everyone else, check out the video highlights above.

What are the London Sessions?

They aim to return 'people' to the centre of what we mean by hospitality, through the sharing of experiences and knowledge.

Each event, or session, will be hosted by legends of our industry. They will be talking informally about their lives, their experiences, what they've learned and the importance of the art of hospitality.

The sessions will be held at Callooh Callay, Blind Pig, City Social or El Nivel. There's no charge, although places are limited and going by the reaction to the first session are going to sell out quickly.

Don't worry if you can't get there in person, you'll be able to watch a video with the highlights from each event exclusively here on Difford's Guide.

... comment(s) for The London Sessions