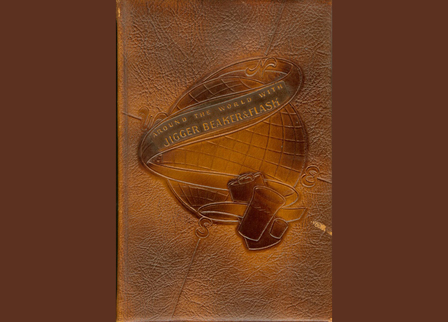 After unpromising beginnings, working in industry, Baker became a writer, traveller, bon vivant, journalist, yachtsman and all-round good time boy, who married a heiress on a whim and wrote only what he wanted thereafter.

Tall, dashing and handsome, "Bake" roamed the world in quest of adventure, food and drink, while fleeing what he described as Prohibition's "arid yoke". Taking up a role as PR on a cruise ship, he packed a steamer trunk with mixing gear, loaded up with booze, and set out to experiment across Asia.

His researches would eventually be published in a luxurious limited edition as the Gentleman's Companion. Or, in Baker's words, World-Famous Lively Liquid Masterpieces from Greater & Lesser Parts of Orient & Occident, & the South Seas.

Baker's prose is beyond inimitable. As David Wondrich, who has followed in Baker's footsteps at Esquire, remarks, "Charles H. Baker is the most lunatic prose stylist of anyone who has ever written about drinks. I respect that. Plus he went everywhere. I envy that. . ."

Baker travelled vastly in a world when few people traveled at all, jumping ship on a whim. He once lived opposite Harry's New York Bar on Rue Daunou in Paris. He visited Siam (now Thailand), Cambodia, Japan, Peking, Mumbai, Singapore, Borneo and Hawaii, among others, and advised happily on the best bars in Manila.

And then, in middle age, he set out to Latin America, and did the same thing all over again.

Baker did well, for a boy from small town Florida. The man who had spent his twenties lunching at free buffets in New York's Knickerbocker Hotel, would hang with Ernest Hemingway and dine with Errol Flynn.

The house his wife and he built in Coconut Grove, its gardens full of fruit trees and herbs was a centre for Miami literary society.

Charles H. Baker's books have survived him. In their insane eclecticness, they're a great resource for bartenders, though not everyone approves of his recipes. (Heaven knows, it's hard to transcribe accurately when you drink as much as Baker did.)

In the States, he's enjoying an increasing reputation: his drinks have appeared everywhere from the Pegu Club in the East to Heaven's Dog in San the West. The Beaker & Flask in Portland, Oregon, owes its name to one of Bake's subtitles for his books - Around the World with Jigger, Beaker & Flask.

And most would still agree with him that "decent libation supports as many million lives as it threatens; donates pleasure and sparkle to more lives than it shadows; inspires more brilliance in the world of art, music, letters, and common ordinary intelligent conversation, than it dims."