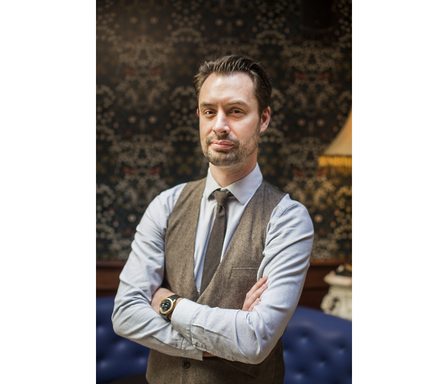 “2008 saw the beginning of the financial crisis: Lehman Brothers went under,” says Richard Wynne. “The X-Factor finalists were no. 1 in the charts and I had just opened Callooh Callay on Rivington Street in Shoreditch.”

“It was the beginning of what was to be the biggest economic downturn since the Great Depression,” he says. “I opened with £8K in my bank, and today, I am very proud to be the owner of a £2m a year business with no loans or liabilities. I ignored the naysayers and made it through the worst financial crisis since the 1930s.”

The beginnings of a business

After a promised bank loan failed to materialise [due to the crisis, one assumes], prospects for Wynne’s London bar were bleak. “I had to get creative when it came to refurbishment ideas and how to raise some cash. I had already committed to a 24-year lease at this point,” he recalls.

Wynne focused on low-budget interior design to cut costs. “Instead of tiling the bathrooms, I looked on Gumtree and found an old music school who were throwing away cassette tapes which I decided I would use to tile the bathrooms. They are still a focal point today,” he says.

“We begged, borrowed and salvaged what we could to get by and made it look good enough that people would happily pay for it,” he says.

Despite its artfully unpolished interior, Callooh Callay’s distinctive style impressed. “Within a year we had managed to refurnish the upstairs bar completely and refurbish the back room. We won Best Bar Team and ironically Best Interior Design at the 2009 Theme magazine awards,” Wynne says.

Wynne continued to channel profits into bar upgrades. By 2012, he had opened an upstairs members-only bar named Jubjub and invested profits into a new restaurant, and Callooh Callay had won the Tales of the Cocktail Spirited Awards for World’s Best Cocktail Menu and ranked 9th in the World’s 50 Best Bars. “We were over the moon, and humbled, to say the least,” he says.

While Callooh Callay had shot to stardom, Wynne’s restaurant business wasn’t what he expected. Come 2014, he faced losing everything he had worked for. “Being a restaurateur really wasn’t for me,” Wynne recalls. “If the restaurant went under, so did Callooh Callay and I would lose my house. It was time to sell. It didn’t take me long to dust myself down, pay off all the loans and asset finance and walk away with a little bit of dignity.”

Wynne took the opportunity to focus on Callooh Callay. “I looked at finding similar staff and managers to when we first opened but without trying to replicate the ‘good old days’,” he says. “I wanted to continue to move forward but actually taking some financial responsibility.”

“In 2016, we won Best International High Volume Cocktail Bar at the Spirits Awards and broke back into the World’s 50 Best Bars,” he recalls. With prestigious awards under his belt, Wynne felt the time was right to open a second bar following a similar concept as Callooh Callay. He opened Little Bat, a London bar and kitchen, in 2016. “After year one it made a small profit and the local and neighbourhood awards started to follow as well,” he says.

Adventures as an entrepreneur

“At school, I was never told about a career in hospitality and like many others I fell into it when I needed a job at university,” Wynne says. “I have since been back to my old school up in Derbyshire hosting seminars for sixth-formers about the joys and benefits of our industry.”

Beyond his key values, Wynne also champions the ideals of other entrepreneurs. “Richard Branson refers to staff as an asset and not a liability,” he explains. “This is followed at both Callooh Callay and Little Bat.”

He believes in a strong workforce, one which is looked after and supported. “Paying above minimum wage, being very open about our service charge, and making sure they all have a good staff meal before shift are just some of the key philosophies we have built into the business over the years,” he says.

While financial success is fundamental, Wynne also strives for innovation. “We have made money and then invested money, constantly creating something new,” he explains. “I honestly believe if you push yourself to be in the cusp of industry development people will recognise this.”

Today, Wynne preserves his creativity but carefully assesses the viability of new ideas. “I still have crazy creative days where all sense of logic and commerce go out the window,” he notes. “Now, more than ever, I live by the notion that there is no point in building something cool if it doesn’t make any money.”

Wynne hopes to inspire other bartenders, those with “not much money but plenty of drive to open up their own space in the future.” With heaps of his own entrepreneurial drive, he joins the finalists in the Havana Club Bar Entrepreneur of the Year Awards this summer. We wish him the best of luck!