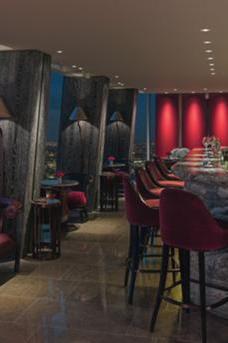 The highest bar in not only England but Europe, Gŏng sits on the 52nd floor of the Shard, handily smack next door to the infinity pool - also the highest in Europe. Unlike other lofty bars with stunning views, at Gŏng they serve tasty cocktails. You'll also encounter the kind of 5-star service you'd expect of a Shangri-La hotel.

Gŏng is derived from 'dougong', the name given to interlocking wooden brackets used in traditional Chinese architecture and featured in the bar's modern Asian design - most noticeably supporting the shelves behind the bar. The loungy space is broken into three distinct areas: cocktail bar, champagne bar and swimming pool. Yup, you can sip cocktails by the side of the pool (from plastic) and we've requested remote control speed boats for our next visit. The glass fridges of the champagne bar hold a choice of 34 champagnes, six of which are available by the glass, in addition to the 13 wines by the glass from the list of 18. However, despite the incredible view of London with the likes of Tower Bridge below and Wembley's arch on the horizon, the real draws here are the affable bartenders and their cocktails.

Head Bartender, Christian Maspes and his very international team have created a cocktail menu designed to take drinkers on an Orient-inspired experience. Some take you on a mythical journey whilst others celebrate the local area, benefiting from the proximity of Borough Market. Cocktails such as the Turkish Chinata, which smells of truffle but has a chocolaty taste, are designed to challenge your senses. If you find the large choice of signature drinks bamboozling, they welcome requests for just about any classic. All are beautifully presented.

Romeo the fox is the bar's mascot and hotel guests will recognise the cuddly fox toy behind the bar as there is also one in each of the hotel's 202 rooms. This dates back to when a fox found its way up to the Shard's 72nd floor during construction of the building. The resourceful animal, which had survived on scraps of food left by builders, was captured and fed before releasing back onto the streets of Bermondsey. 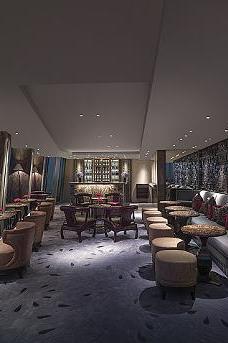