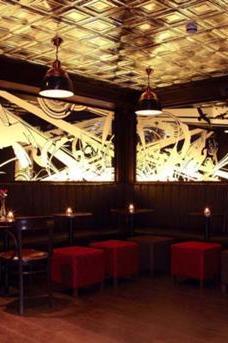 Some will find the whole Nightjar experience overly poncy but others will love the attentive service and incredible attention to detail evident in the beautifully presented cocktails.

Such is the reputation of Nightjar and the careful manner in which owners Edmund and Roisie Weil manage their baby, that this is not a bar you can simply wander into. Please go online and book - a process that includes securing your reservation by credit card. Reserve your slot pre-music or after the live music starts - I guess depending on how much you want to engage with your drinking partner(s). Music genres range from traditional jazz, blues, ragtime, boogaloo and swing to cabaret song musical story-telling.

Nightjar lies just off London's 'silicon roundabout', so named not due to surgical enhancement (although it could use some kind of visual enhancement) but due to the proliferation of dot coms in the area. The entrance is almost speakeasy in its lack of signage. Look for the double doors between Cafeteria with a 'C' and Kafeteria with a 'K'.

Once past the door greeter, head down the dimly lit wooden staircase (mind the last step) to equally atmospherically lit twin rooms resembling an early 20th century European cabaret venue. Exposed brickwork, a tin ceiling, built in brown leather banquette seating, small round tables and even smaller stools - beware if you're a lard arse, or like me think all seats should have backs and preferably arm rests.

While the intimate atmosphere and music are to be relished, Nightjar is considered one of the top bars in the world due to its elaborately garnished cocktails. Sadly, we've been disappointed by the drinks but we'd encourage you to visit and form your own opinion.