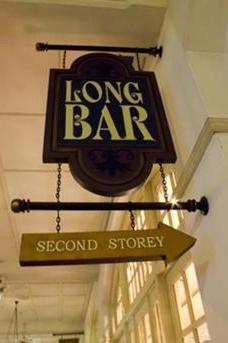 Somerset Maugham, Oscar Wilde, Aldous Huxley, Dorothy Parker, Noel Coward and sundry luminaries have graced this classic hotel bar since the Raffles Hotel opened in 1899, and many of them enjoyed "gin slings" here.

Perhaps they also crunched across peanut shells to reach the bar where Ngiam Tong Boon apparently created the Singapore Sling a century or so ago. Maybe. But we're pretty sure their gin slings weren't pumped out as a pink goop from a machine behind the bar.

Paradoxically, order any Sling that's not a Singapore Sling from their drinks list (they offer several), and the staff will make it for you by hand. Judging from what they did to our Dry Martini, however, that's not necessarily a good thing.

Once you get past the peanut shells, the drinks, the comedy ceiling fans and the welter of tourists supping premixed drinks for which they just paid $26 PLUS service PLUS tax, the Long Bar remains an architecturally fascinating space. As a heritage bar in a landmark 5-star hotel, however, it's an utter disgrace. 2/5