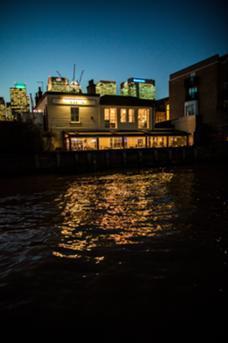 The site of a public house for over 250 years, The Gun's rear terrace looks across the Thames to the Millennium Dome on the opposite bank. While the Gun boats river views and is only a 15 minute walk from Canary Wharf, its Isle of Dogs location feels isolated but that doesn't stop foodies making the pilgrimage to this quaint gastro pub.

Grade II-listed and built in the early 19th century, The Gun takes its name from the cannon fired to celebrate the opening of the West India Import Docks in 1802. The surrounding area was also home to dockside iron foundries which produced the guns for the Royal Navy's fleet. An upstairs room (now called The River Room) was allegedly the venue for Lord Horatio Nelson's secret assignations with Lady Hamilton. The Vice Admiral owned a house, still known as Nelson's House, just up the road. In 2001, a fire gutted much of the interior and The Gun remained closed until brothers Tom and Ed Martin through their ETM Group rescued the old pub and after nine months of loving restoration re-opened in 2004.

The Gun is still operated by Tom and Ed and is one of the ETM Group's more serious foodie pubs with the front room with its beautiful old carved oak bar and oak floor mainly given over to linen-covered tables. Behind this lie two cosy snugs, the Red Room with Chesterfield sofas and wingback leather armchairs, and the Gun Room with an original Georgian bullseye fireplace. Antique guns and nautical pictures decorate the place.

The combination of white linen and the formerly attired staff, complete with red neckties, makes the front bar overly formal, dare I say pretentious. Much better to forgo the linin and eat on the covered rear terrace with views over the river. The modern British menu and service is more high-end restaurant standard than gastro pub.

Brewed by Sambrooks especially for the ETM Group, the excellent Jugged Hare pale ale is one of four cask ales on hand pump. The keg and bottled beer offering is well above average and features numerous London brewed beers. The voluminous wine list is very classic in both layout and listings and includes 20 bins served by the glass. The Gun also boasts a good spirits selection and offs a handful of cocktails.

The over formality of the front dining room kills this pub's atmosphere. Head straight to the back, the cosy snugs and the river vistas. 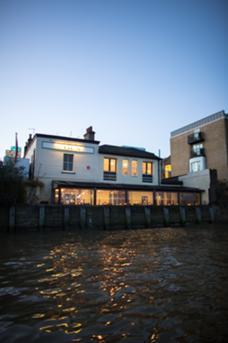 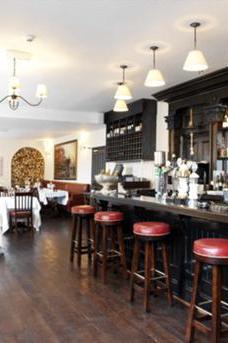