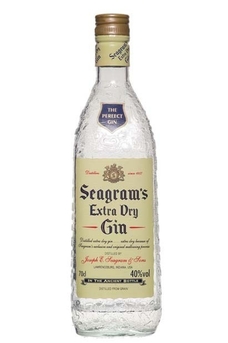 
Seagram’s gin is made from American grain neutral spirit flavoured with botanicals using a low temperature vacuum distillation process. Besides the obligatory juniper berries, the botanical recipe includes Sri Lankan cardamom, Vietnamese cassia, Spanish orange peel, Czech coriander and angelica.
Seagram’s gin was introduced to the US market in 1939 and is made in Lawrenceburg, Indiana, at a distillery built in 1847. The Seagram Company acquired and reopened it after the repeal of Prohibition in 1933.

Unusually, Seagram’s gin is “mellowed” for “several weeks” in charred white oak barrels which have previously been used for maturing whiskey. The golden hue this gin once had is now barely noticeable, probably as a response to the dominant consumer perception that gins should be clear.

Like the colour, the bottle design has also evolved. When the gin first launched it was named ‘Seagram’s Ancient Bottle Distilled Dry Gin’ and the bottle was embossed with seashells and starfish. Although successive marketers have modernised the bottle, the bumpy surface remains a trademark: so much so that someone came up with the strap line “The smooth gin in the bumpy bottle”. Bizarrely, ‘The Perfect Gin’ logo which graces the shoulder of the bottle bears a scary resemblance to the Salvation Army’s logo.

It is often claimed that the Seagram family crest on the gin’s label dates back to 1857 and this date features prominently on the packaging. The history of the Seagram business can indeed be traced to 1857, when a distillery was founded in Waterloo, Ontario, Canada. However, Joseph E. Seagram did not become a partner until 1869, and only assumed sole ownership in 1883: this was when the company became known as Joseph E. Seagram & Sons. Joseph died in 1928 and a few years later the Distillers Corporation, founded by Samuel Bronfman, acquired Joseph E. Seagram & Sons, and took over the Seagram name.

The company prospered and after Samuel Bronfman died in 1971, Edgar M. Bronfman became Chairman and CEO: in June 1994 Edgar’s son, Edgar Bronfman Junior, succeeded him as CEO. Many blame Edgar’s decision to move into the film industry and acquire Universal Studios for the undoing of the company established by his grandfather: Vivendi acquired Seagram's entertainment division in 2000 and Pernod-Ricard and Diageo between them acquired all of Seagram’s drinks brands the following year. Perversely, Seagram's Gin is now owned by Pernod Ricard while Diageo owns Seagram's Seven Crown whiskey.

Seagram’s gin is the leading brand of gin in North America, where, with its numerous flavoured line extensions, it sells over three million cases every year.