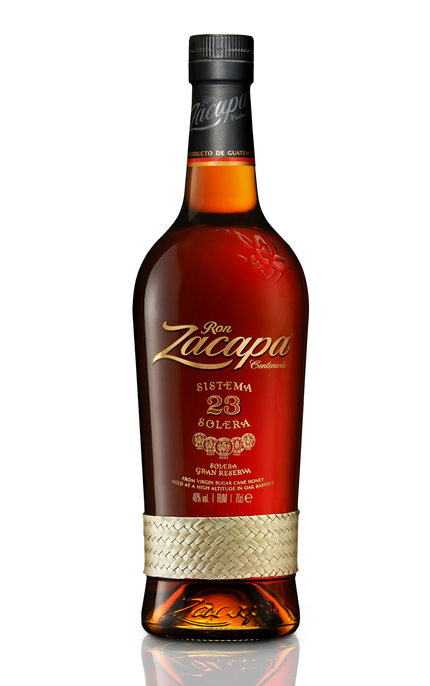 Ron Zacapa is famously aged in warehouses one-and-a-half miles above sea level among soaring Guatemalan mountains and active volcanoes. Launched in 1976, it is produced from the first pressing of sugar cane juice rather than molasses.

Referred to as 'virgin honey', the sugar cane juice is 14% sugar (76-77 brix) and is heated to evaporate water and concentrate the sugary solution. The natural yeast culture used to ferment this sugary juice was originally taken from pineapples and batch fermentation occurs in closed tanks.

After distillation, the spirit (which comes off the still at 88% alc./vol.) is reduced to 60% before going into scraped and cleaned American oak ex-bourbon barrels for three years. After this first aging period the run is blended in a large vat where it is mixed with just over 10% of much older rum. It is then re-casked in recharged barrels and left for a further two years before again going into a blending vat where it is once again mixed with older rums. This process is repeated a third time but the rum is then placed in ex-sherry butts for another two years before again being blended with older rums. For the fourth and final aging process the rum spends two years in Pedro Ximénez sherry butts. Finally, the rum is blended and mixed with older rums then reduced to 46% alc./vol. before going into a large (17k-20k litres) American oak vat to marry for six months.

Note, this does not claim to be 23-year-old rum as some (including me) assumed from its somewhat misleading original (pre-Diageo) incarnation. What was then named 'Ron Zacapa Centenario Gran Reserva' stated "23 años" on the front label. The back label of an old bottle acquired in Italy says: "La sua vita comincia dopo 23 anni. Questo e'il motivo per il quale la produzioni di questo esclusivo rum e limitata." Which roughly translates as, "His life begins after 23 years. This is the reason why the production of rum is exclusive and limited."

This complex "Sistema Solera" maturation and blending process takes place in warehouses perched at 7,650 feet (2,332 meters) above sea level so unusual atmospheric conditions also have a significant effect on the maturation process. Finally, the rum is reduced to bottling strength and gently pad filtered at room temperature.

Given that sugar does not 'come over' during the distillation process, and the folk from Zacapa vehemently deny adding sugar to their rum, the source of Ron Zacapa's perceived sweetness remains a mystery. Some claim they paint fresh sugar cane juice onto the inside of the casks before recharging. Others, that it is from a combination of the continued scraping and re-charring of casks that brings natural sugars in the wood in contact with the maturing rum. Could it be a combination of the latter and the high altitude the rum is aged at? Alternatively, perhaps a little mystery is a good thing?

Ron Zacapa is produced in a small town in Guatemala named Zacapaneca where many of the residents make their income from making artisan products from 'Royal Palm' leaves. Ron Zacapa 23 used to be sold in a bottle completely wrapped in hand-woven palm but as this rum has grown in popularity, it's covering has shrunk to now be a mere 'bikini' of hand-woven palm modestly wrapped around the belly of each bottle.