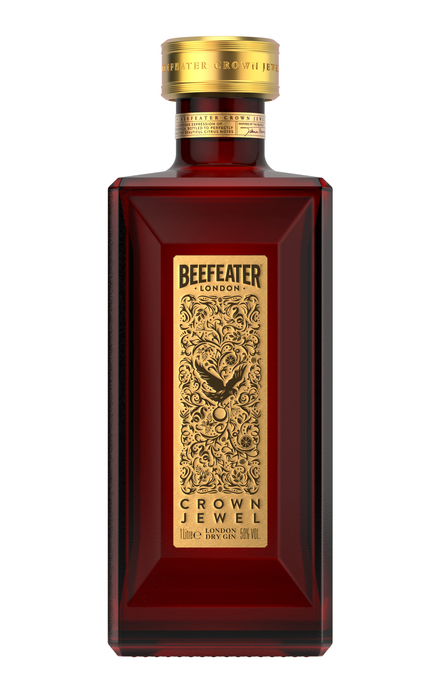 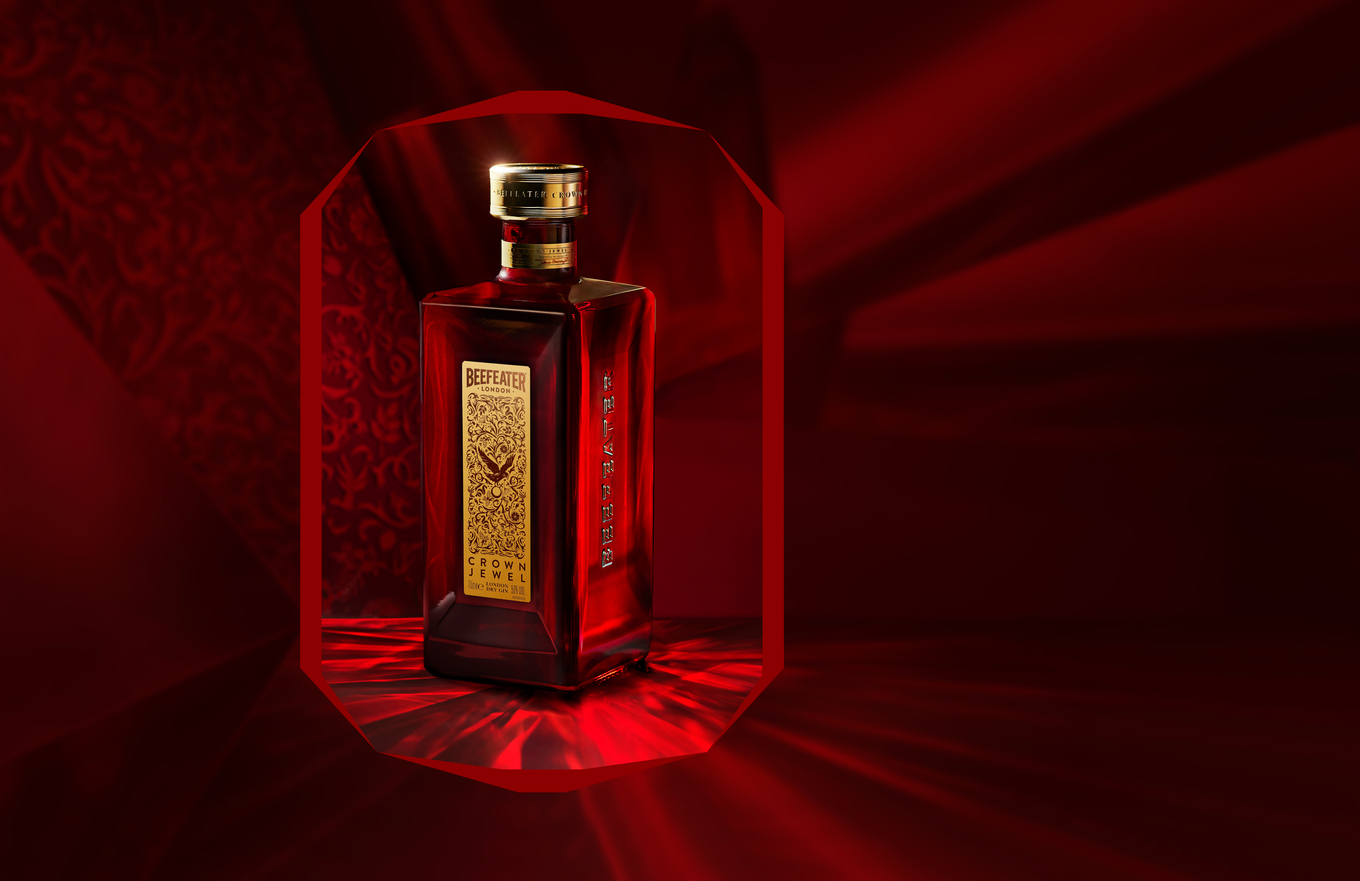 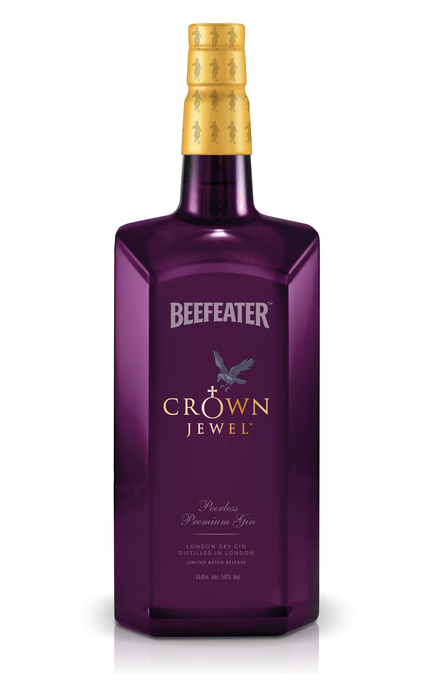 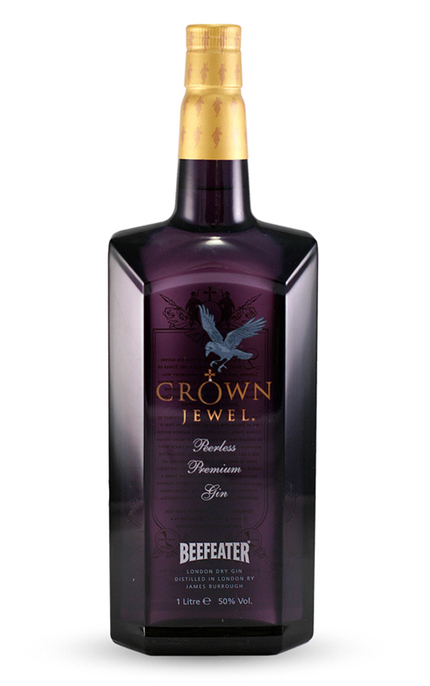 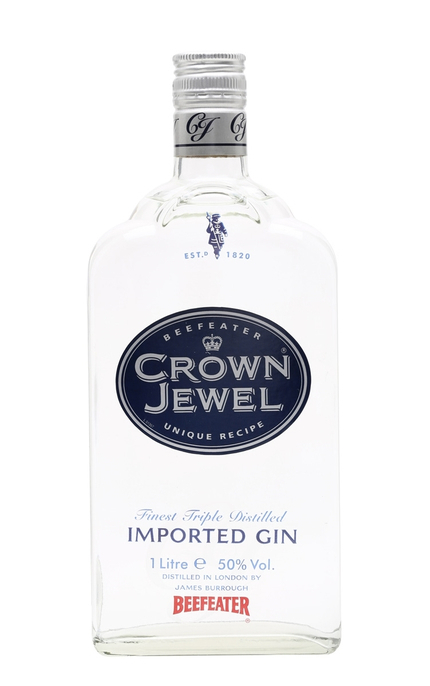 Originally launched in 1993 and aimed at the travel retail market, this premium Beefeater expression is named after the Crown Jewels displayed at the Tower of London and watched over by the Yeoman Warders (Beefeaters).

The present bottle, launched at the Tower of London with Beefeaters present on the 10th of November 2022, is the fourth incarnation of Beefeater's Crown Jewel Gin. A deep purple, square bottle, it has a London brick-like appearance.

This (as with the other previous incarnations) is made using the same recipe as the original Crown Jewel using the same nine botanicals as the standard Beefeater gin (Tuscan juniper, coriander seeds, liquorice, orris root, Seville orange peel, Spanish lemon peel, Spanish bitter almonds, angelica root and seeds) with the addition of a tenth botanical, grapefruit peel. Indeed, it was this recipe for Crown Jewel that inspired Desmond Payne to add two types of tea to make Beefeater 24 Gin.

Incidentally, the Crown Jewels include crowns, sceptres, orbs, swords and rings worn by the reigning and previous sovereigns of the United Kingdom at state functions. It is the world's most valuable collection of jewellery.

The original Crown Jewel bottle (the fourth bottle in our lineup) was clear with a silver Crown Jewel logo presented on a royal blue oval crest. This was discontinued in 2009 with the release of Beefeater 24.

Crown Jewel was resurrected late in 2011, this time in a distinctive tall rectangular purple bottle with angled edges (the third bottle image). This gaudy bottle remained unchanged for the next, 2015, release but the screen-printed graphics were subtly updated for the relaunch. This incarnation featured a batch and bottle number, neither of which featured on the original bottling and was dropped for the 2022 release.

From the second bottling onwards, Crown Jewel has featured a raven swooping down to clutch an orb: a reference to the ravens who have lived at the Tower of London for centuries. Legend has it that if the ravens ever leave the Tower then the castle's White Tower, the monarchy, and the kingdom will fall. Perhaps for safety's sake then, the ravens' wings are clipped to prevent them from flying away.

More citrusy (although less orangey) and at a higher alc./vol. than regular Beefeater, Crown Jewel bursts onto the palate yet is rounded and dry with plenty of juniper plus hints of parma violet, candied citrus peel, liquorice and zingy white pepper.

The refreshing and cleansing pine finish has a milder white pepper tingle that one might expect from a gin of this strength.

Crown Jewel is a brilliantly balanced gin with juniper, citrus and white pepper spice presented in harmony, but it is the floral parma violet notes from the generous use of orris root that set this gin apart.