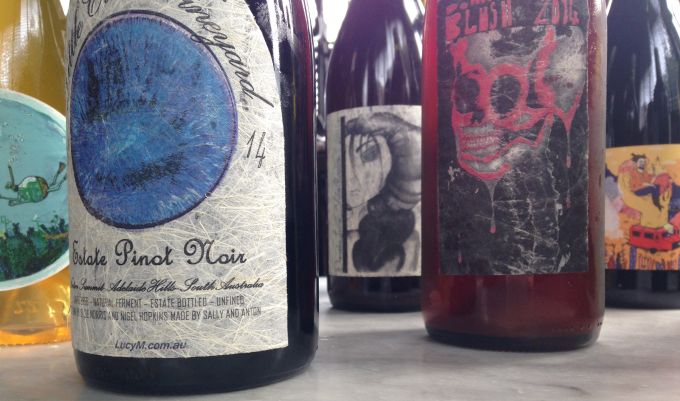 Natural is a branch of wine-making that elicits a great deal of curiosity, a deep chasm of misunderstanding, vehement love and loud objection. It offers a counter-culture to those willing to adventure and has a defiant voice that avoids definition.

As wine, it achieves success by the thoughtful choices of a winemaker, but the movement as a whole achieves success thanks to many intersecting factors – one of which is the natural wine aesthetic. Here we’re looking at what exists purely outside the bottle: the wine-label art and what that says to us as consumers.

To have a counter-culture you need to have a well-established grain for it to oppose. Mainstream wine styles are all around us and easy to spot, just leafing through the Saturday paper a few weeks ago I found a six-page wine advertising lift-out including options for buying red, rosé and white wines.

Red wine labels used elegant white, charcoal, crimson and gold, stately and traditional bracketed serifs and crests. They were photographed with cheese boards and often perched on used wine barrels with picturesque landscapes. Rosé was presented as fun with exclusively washed-out ballerina pink backgrounds and the word ‘flirty’ liberally applied to most descriptions. The white varieties had a collection of labels sporting elusions to crispness and dryness on them with overexposed images of rippling water and glaring cold natural light. The visual narratives of these wines was very different to the aesthetic choices made by the natural wine lot.

There is an air of punk and youthful disobedience that finds its way onto the labels of natural bottles designed to shock and titillate. They’re designed to give you a naughty thrill for buying a bottle of wine with something utterly subversive on the label.

A great example is Catherine Dumora and Manuel Duveau’s Gamay, a delicious bottling from the north Auvergne. The label is black and white with a bare-breasted female figure at its centre. Pussy Riot-style, her face is mostly covered, and her fist is lifted into the air with the word ‘vin’ next to it, while painted on her bare chest and stomach are the words ‘fait main’ – ‘handmade wine’. The call to free wine from its commercial manacles rings like a bell throughout the artwork of natural wine and really is the core impulse for the aesthetic choices made.

The subversive often presents itself as highly sexualised and is a distinct trope of the natural wine label – there is a great deal of the female form on bottles of natural wine. I have joked with winemakers and patrons alike that there is an unfortunate lack of phallus on natural wine labels, but that is a whole other kettle of fish.

We are less keen on this in Australia, but out of Europe, particularly France, nudity is quite the fashion. A few examples that spring to mind: Christian Tschida’s ‘Red Sonja’ Cabernet Franc from Austria. The label is in a colourful comic-book style depiction of a female heroine of an ancient land, masterfully wielding a sword and wearing a bikini of chainmail. She is powerful and fierce, but she is also not wearing very much. 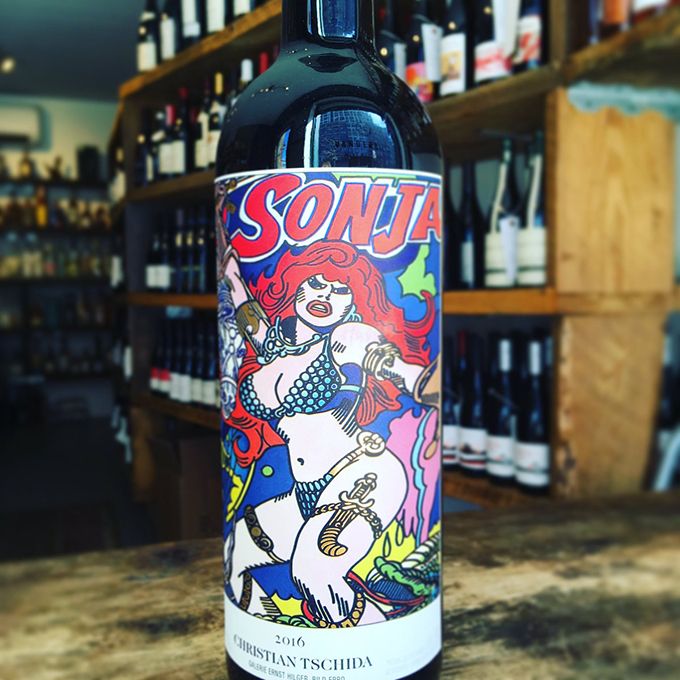 Anne et Jean Francois Ganevat’s ‘Les Dentelles’, a blend of Syrah and Grenache is another label that often gets a giggly reaction tableside. It shows a line drawing of a woman, viewed from behind, cropped at the waist, wearing a very short flouncy skirt, stocking suspenders and heels with her lacy undies sliding in the direction of her ankles. This wine is sold out almost the moment it hits Australian shores. 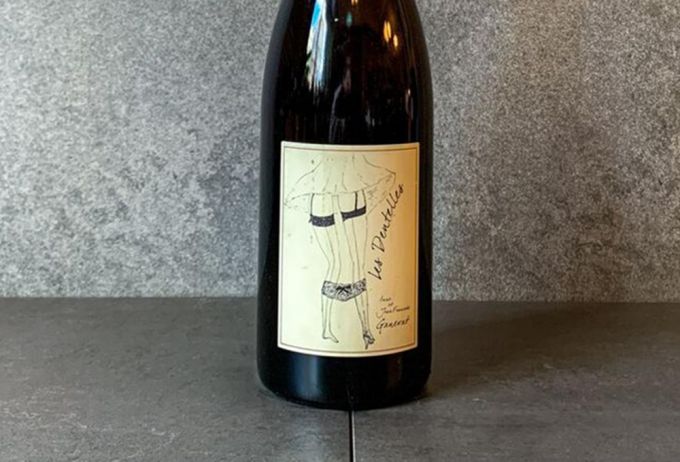 Female winemaker Julie Balagny produces a Beaujolais from Fleurie called ‘Sex-Appeal’ The label is a watercolour in black and white of a woman’s ample chest dressed in something skimpy, black and latex-looking. The wine is soft and yet strong, dark-fruited and has a sort of rose incense that hangs in the nose. It is very sexy. These images depict woman baring skin, being real, being confronting, being naked and showing their natural assets. Like the wine, they are unmasked.

The philosophy of ‘fait main’ extends to the labels, which are often made from recycled or natural materials.

The first example of this I encountered was a bottle of Anton von Kloppers, Lucy Margaux ‘Little Creek’ Pinot Noir that sat mysteriously in a dark corner of Sydney wine bar Love, Tilly Devine next to a bottle of William Downie. With its burst of central colour, recycled paper and curly script it visually signalled to me that something very different was afoot. Tom Shobbrook’s ‘Giallo’, is another clear example, it’s an orange wine in a long clear bottle, with a peeling brown paper label, simple white painted cursive letters and a thick dripping black wax at its opening. The whole effect was that of a tangy lava-lamp.

These wines heralded the dawning of a different mindset in Australian wine-making, and their labels marked them accordingly – a conspicuous departure from the bottle-o regulars.

4. A sense of humour, a childlike whimsy and a good dose of colour

In the past, wine has been mercilessly marketed as an expensive luxury product. Natural wine labels often prefer to poke fun at themselves, or to be cheeky and creative. This leads to more abstract shapes, more vivid colours and more playful fonts. 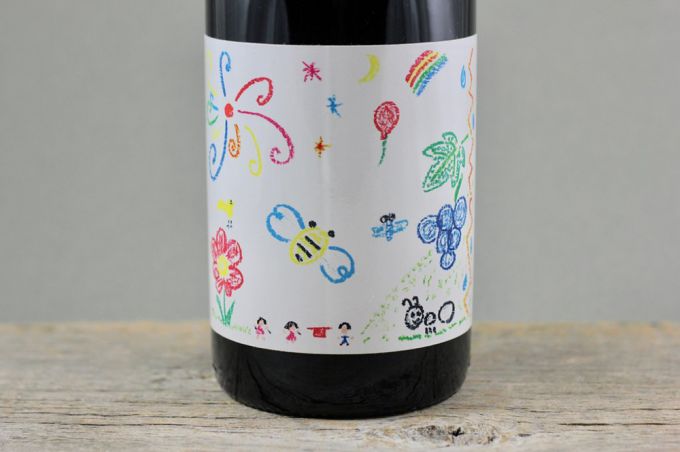 The beautiful wines of James Erskine in McLaren Vale are made under the domaine name Jauma, which is written on the wines in a child’s colourful crayon handwriting. Japanese winemaker Hirotake Ooka also employed this look on his rare Cornas bottling, which has a crayon drawing of the sun, some grapes and a happy looking buzzing bee on the label. Brave New Wine out of WA have a selection of patterned labels which are an ecstatic assault of colour. Jean-Pierre Robinot, a natural wine legend, has a series of labels that look like a queasy midnight car chase through a city shot with a long exposure. These wines are unbounded, and their labels demonstrate that in the feeling they convey.

It was in a conversation with Ruggabellus winemaker Abel Gibson from the Barossa that I first heard the word ‘alchemy’ used in reference to winemaking. It changed me and it changed how I think about alcohol and fermentation. Natural winemakers are acutely aware that while they employ all their skill in the vineyard and the cellar, there is a part of the process that will always be left to mother nature, to chance and to that intangible other, and this is often depicted in their aesthetic choices. 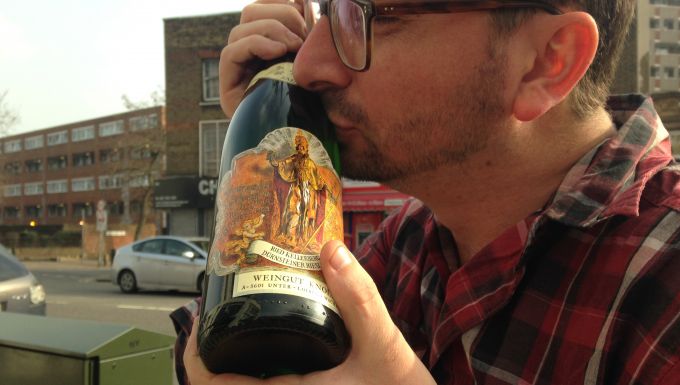 Domaine Prieuré Roch sets out his winemaking beliefs in hieroglyphs on his label, and in 1988 Burgundy this was considered very avant-garde. American brain Abe Schoener of Scholium Project uses a diagram first set out by Newton in his Principia (3rd ed., 1726) as a signature on his wine labels. One of the most incredibly dramatic wine labels I have ever encountered is that of Austrian Emmerich Knoll. The explosive orange label contains a depiction of Saint Urban, the patron saint of winegrowing, set among flowing Latin script and flanked by chubby cherubs holding bunches of grapes.

These aesthetic choices are the expressions of deep thinkers for whom wine-making is a philosophical undertaking, and this melding of science, meditations on nature and magic are themes echoed in the natural wine movement more broadly.

6. Exceptions to the rule – imitators and outliers

I will have to take a detour in my argument to admit that there are major exceptions to the rule. There are winemakers who work within the realm of the natural (including: sustainable, biodynamic, human-scale, earth-respecting, patient and masterful) but do not present themselves as a part of the contemporary counter-culture. Often this is because ‘natural’ is just the way they have always worked and so their labels do not need to herald something ‘new’ (enter Nicolas Joly) or they consciously reject the aesthetic (enter Vanya Cullen).

On the flip side there are wines that market themselves as natural by label but do not tick the aforementioned natural qualifying boxes. However, I always find their efforts a little jarring: like a piece of improvised music that has been regulated. It seems like a simulacrum.

So, the conclusion, as unsatisfactory as it is, must be that the truth is in the tasting and that the outside of a bottle can only tell you so much. That although one can identify key themes and patterns there will always be the outliers and the imitators and so the proof must be located beyond the aesthetic and found most firmly in the quality of what is in the bottle.

... comment(s) for Judging by a Label – The Aesthetic of Natural Wine