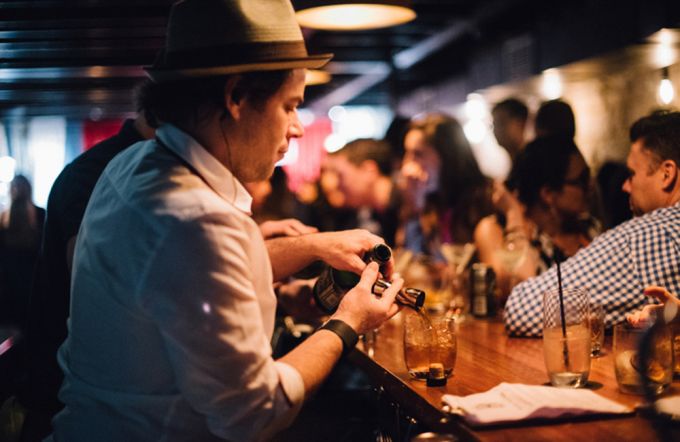 What makes a bar – the light fittings? The brick-work? The drinks menu? The faces behind it? It’s a question Chau Tran and Bryce McDonough had to come up with an answer for, when they transplanted their beloved Burrow Bar from its home of five years into a new site.

Moving Burrow Bar was on the cards for a while. Nestled into its old basement, the bar had become a staple feature of Sydney’s drinks scene, but its building was granted a development application – making it far more lucrative to sell for the owners than keep as is. “We’ve known for a few years that we have to move at the 5-year mark,” says Bryce. “When the building sold, we realised we’d have maybe one extension on the lease if we were lucky but there’d be no legacy.”

Chau and Bryce started work trying to find a new home for the bar they’d very literally built by hand, but the city in pre-Covid times was a hot market, with most venues looking to expand. At that point Sydney’s CBD was worth more to the Australian economy than the mining industry in Perth and venues were leasing for extraordinary prices.

“We’d managed to negotiate a good rent in our space, and I couldn’t see how other places that were opening were paying their rent bill and their wage bill. It just didn’t make any sense. You end up working dawn to following dawn as a charity, not making anything for yourself with leases that high,” says Bryce. “We were scared into a situation of not knowing what our next move was.”

Post-pandemic, Sydney’s rental market reopened with more reasonable rent prices. Eventually Burrow Bar’s new home had for-lease signs up on the upstairs’ windows – it was a two-storey site that Chau and Bryce has been walking past on their way to work every day for five years.

“We rang the day the signs went up,” says Bryce. “It turns out a few other operators in the city had done the same thing and it took a little while to get from that point to finalising us as the likely tenants – we picked up the keys two days before Christmas. Suddenly we were looking at the future and that’s when we had to figure out how were we going to do this exactly. We could have opened the doors in 3 days if we’d wanted to, but it wouldn’t have been us.”

The new site did present a chance to rebrand, if they wanted to. Chau and Bryce say they had the chat but Chau was very convinced the team had spent a lot of hard work and time building Burrow Bar up, it would be silly to throw it by the wayside for no reason. With the new site there was a real opportunity to make Burrow feel at home again.

“Bryce had done the initial walk through,” says Chau, “and he called me to say ‘you’ll love the basement’, but I was a bit dubious. When I walked in, saw the cool entrance in the laneway, turned the corner and saw the sandstone, that was when I got goosebumps because we didn’t fabricate how similar those touchstones of Burrow Bar being here again.”

“There’s enough touches to feel like Burrow Bar,” agrees Bryce, of the new site. “We’ve picked up a few things from the old site that we’ve transposed in, obviously bringing the team is a big thing and all of the booze is another – but a sensation of the bar is all about the feeling you get when you walk into it and if it’s the same hospitality, right lighting, right music, the same overall booze experience ready to roll, that is definitely going to be the first thing people notice.”

We've added the finishing touches and are ecstatic to let you know. We're open for business!

Regular customers will notice the new bar top is a bit different but the old pendent lights have moved over, as well as a few of the booths and even the same fire place.

“We’ve watched how people react to a space for the past five years, the way people love certain spots. We needed to make sure we transported enough that all the favourite features remained, so that it felt like it was coming back home,” says Chau.

The team were also conscious not to leave too much behind at the original site so that someone would be able to walk in, flip the switch, and pretend to be Burrow Bar.

Now that transformation is complete, you can see the success of it yourself in the basement of 96 Clarence Street. It’s still very much Burrow Bar – it feels like you’ve slipped into a hazy memory of the old address where the space feels a tad bigger (it isn’t, but the layout is deceiving) and where all the details are there, just rearranged.

Upstairs from the transplanted bar is a brand-new concept from Chau and Bryce however, one that is as fresh as the paint on their new walls.

“While we moved Burrow, nearly our entire collective brain power has been making sure we fleshed out the concept upstairs, ensuring it was something we really wanted to do and could do,” says Bryce. “We started fleshing out the idea right after we looked at the space. We said, right, how are we going to do it?”

“We knew we didn’t want a two level Burrow Bar – that was really important, that was my biggest hesitation when we saw this site,” says Chau. “Burrow food is great but it’s not a restaurant so there’s no point trying to flesh that out unless we do something entirely different. We decided upstairs could be a proper restaurant with kick-arse food for lunch and dinner, and with a takeaway window that does coffee and cocktails. By midnight on the day Bryce saw the site he said, why don’t we do Vietnamese food?”

Chau’s heritage is Vietnamese food, and she has an incredible cook for a mother who recreated her regional dishes for Chau as she grew up.

“Most of the Vietnamese restaurants here are a representation of the entire country, from the top down, whereas we are trying to go regional and do delicious, authentic food but plate it in the modern way that dining has evolved. We want people to be able to go through an entire menu whether you’re with two people, three or ten and also have it not be price prohibitive. If we can make it with delicious ingredients and ensure the portion is proportional to what we want to charge as well you can have whatever dining experience you want.”

Chau’s mum won’t exactly be stuck in the kitchen but she’s been involved in menu development and ensuring things stay as authentic as possible. “She’s super excited to see what we’re doing because I don’t think she’s ever seen Vietnamese food elevated to the way we want to plate it. She’s definitely going to be a key feature,” says Chau.

As to the drinks upstairs, they’re going for light, unaged spirits and easy-to-drink cocktails with a great wine list to match. Downstairs will be sticking to Burrow’s usual theme of aged, boozy spirits and cocktails.

“We’ve got a killer wine list put together by a sommelier who is a friend of ours and a pretty amazing beer list that one of our bartenders, Jacob, put together. In regards to the drinks, upstairs is light, bright and breezy, minimal barrel, we’re talking gin, white rum, tequila, pisco, little bit of vodka, calvados – lighter colours and crushed ice cocktails. We’ll try to build drinks that are naturally refreshing and pair with the food, and that allows us on a Sunday to have the cheekiest Bloody Marys in the world. If anyone wants to see the spirit list from downstairs, someone will run it up, that’s fine. But at the end of the day we’re choosing a drinks program we think will go with the venue,” says Bryce.