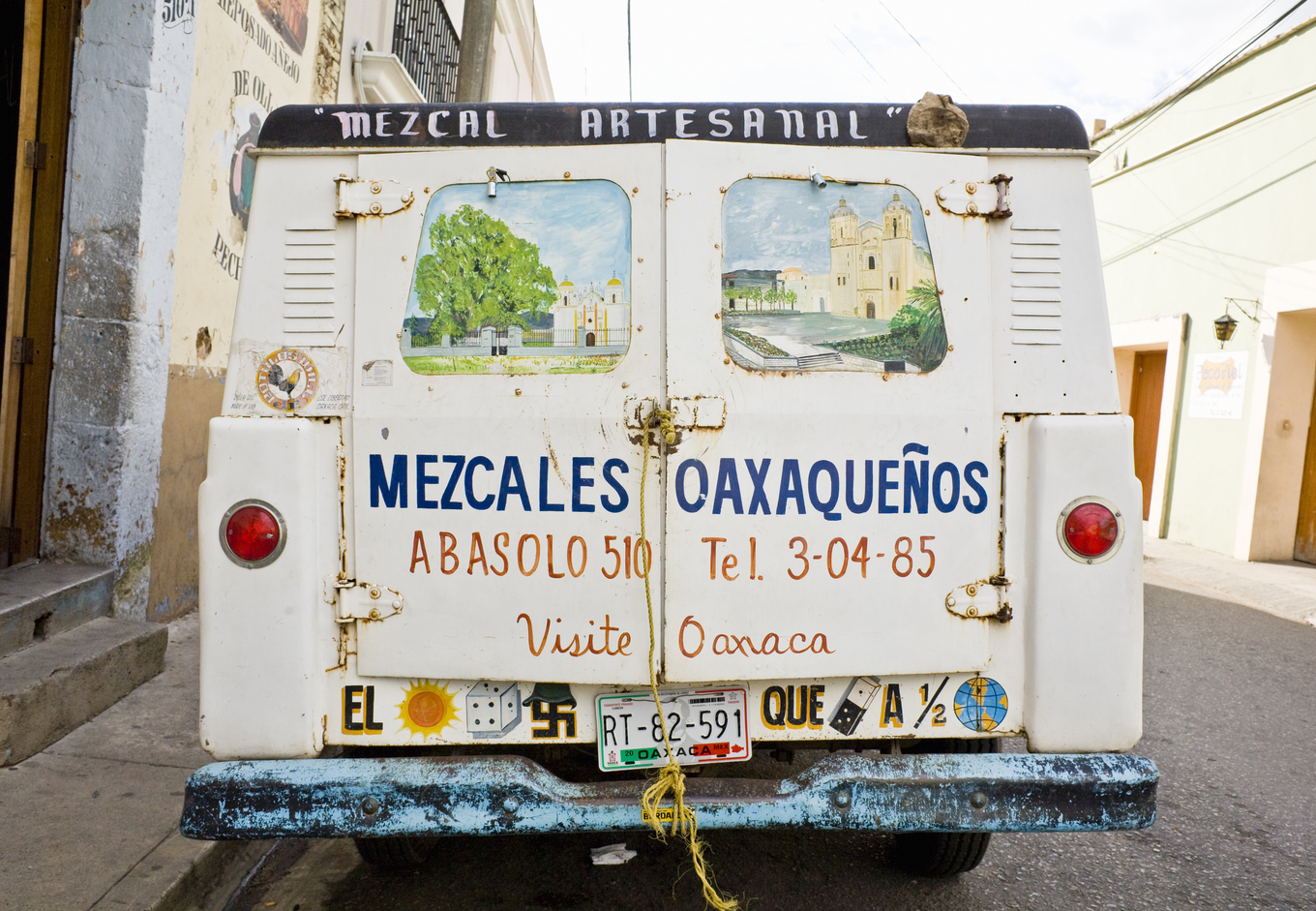 While tequila is mainly distilled in and around the northern state of Jalisco, mezcal is production is most identified with the southern state of Oaxaca (pronounced 'Wo-Ha-Ka') and the neighbouring states of Guerrero and Puebla. However, mezcal is also produced in Michoacán, Guanajuato, San Luis Potosí, Zacatecas (four states neighbouring Jalisco), the eastern state of Tamaulipas , and as far north as Durango.

Mezcal is distilled from the fermented juice and flesh of the Maguey, a member of the Agave family of succulents that have been cultivated in Mexico for millennia. Long before the Spanish Conquistadors of Cortez arrived, the maguey was an integral part of the culture of the Indians of Mexico. They fermented a beverage called pulque, a sweet beer-like drink, considered sacred under the protection of Mayahuel, the Aztec goddess of the maguey plant. Although pulque was drunk at religious ceremonies, drunkenness was frowned upon and could be punished by death.

Distilling of mezcal started during the 16th century when the Spanish began distilling juice derived from cooking the heart of the maguey plant. Although the Spaniards banned the Indians from producing mezcal, they soon learned the technique and used vessels of baked clay instead of copper.

Mezcal production is traditionally small scale and artisanal and although there are now large mezcal distillers operating on an industrial scale, many distillers continue to make just a few hundred bottles at a time using small traditional stills, some still made of clay. Unlike tequila, products labelled mezcal can only be exported in bottles and not in bulk. (The maximum export container size for mezcal is 5-litres.)

When the Agave reaches maturity, the leaves are cut off with a machete and the roots are removed with a heavy semi-rounded blade on a long rod, known as a coa. This leaves the core of the plant, called a piña, named after and resembling an enormous pineapple.

The piña, weighing 30 to 100 kilos, is cut into two halves, or quartered if large, and thrown into an oven (horno). This traditionally consists of a large hole dug in the ground, lined with fireproof Lava bricks and preheated by burning wood. Once loaded with piña, the hole is covered with a layer of maguey fibres (bagazo) then stones and clay to form a crust over this piña pie which is left to slowly cook for three to five days. The slow braising of the piñas caramelises the piña and imparts mezcal's delicate smoky flavour.

Industrial mezcal distilleries use stainless steel autoclaves that roast the piña in days rather than weeks. These are very efficient but don't impart the same flavours as the slow traditional roast.

The roasted piña is then crushed in order to separate the pulp from the fibre, which is then macerated in pure water.

Very small distilleries load the brown piña into a trough or hollowed tree trunk and then pound the piña with a wooden club that resembles a tool from the Flintstones. Larger distilleries use a stone wheel called a 'Tahona' pulled around a circular stone pit by a horse or small tractor. Industrial distilleries use a roller mill.

The juice and fibres from the crushed piña are transferred to vats (traditionally wooden) called tinas. Airborne yeasts and yeasts from the skins of the maguey start fermentation, which, depending on how warm the weather is, lasts several days during the summer to a week or so in the winter. Fermentation produces a mosto similar to the pulque mentioned earlier.

The mosto is then distilled in pot stills which are usually made of copper but some are still made of clay with bamboo-like tubing.

The first distillation produces ordinario, a weak alcohol around 20% alc./vol.. To make mezcal, the distiller must redistil this ordinario a second time.

During both distillations, volatile alcohols, the heads or puntas run from the still first. Then the heart el corazón the desirable spirit starts to flow. This is collected until the distiller judges the need to cut as the tails, or colas, which contain methanol and undesirable oils, start to flow.

The vast differences in the process, equipment and scale contribute to aficionados categorising three different kinds of mezcal:

Industrial - made by plant managers on an industrial scale using autoclaves, roller mills and large stills.

Ancestral - made from wild agave using only underground ovens, natural fermentation and small stills – often clay stills. These mezcals tend to be above 45% alc./vol., partly due to their makers deciding this is the best strength to convey their craft but also due to their being mainly made for local consumption so alleviating the need to water them down to save duty and make price points in international markets

Mezcal is usually joven, unaged. Besides a south community in Michoacán, it is not traditional to age mezcal in oak casks although reposado (minimum 3-month-old) and añejo (minimum 1-year-old) mezcals are now produced by some distillers.

Due to its ease of cultivation and centre-of-the-road flavour profile, Espadín is by far the most widely used but mezcals made from numerous other agave varieties are now finding their way into export markets. Each agave has its own distinctive flavour profile, which in turn is also influenced by the soil and climatic influences of where grown. The varietal of agave used dramatically affects the flavour profile of the finished mezcal.

Traditionally some bottles of Mezcal contain a 'Gusano'. Although this translates to mean 'worm', it is actually the larva of the 'Night-butterfly' which emerges from a small egg left by the butterfly on maguey leaves. It burrows into the heart of the Maguey where it is protected from predators while it grows. Once mature, the larva transforms into a chrysalis and then a butterfly, that is unless it is captured and pickled in Mezcal. 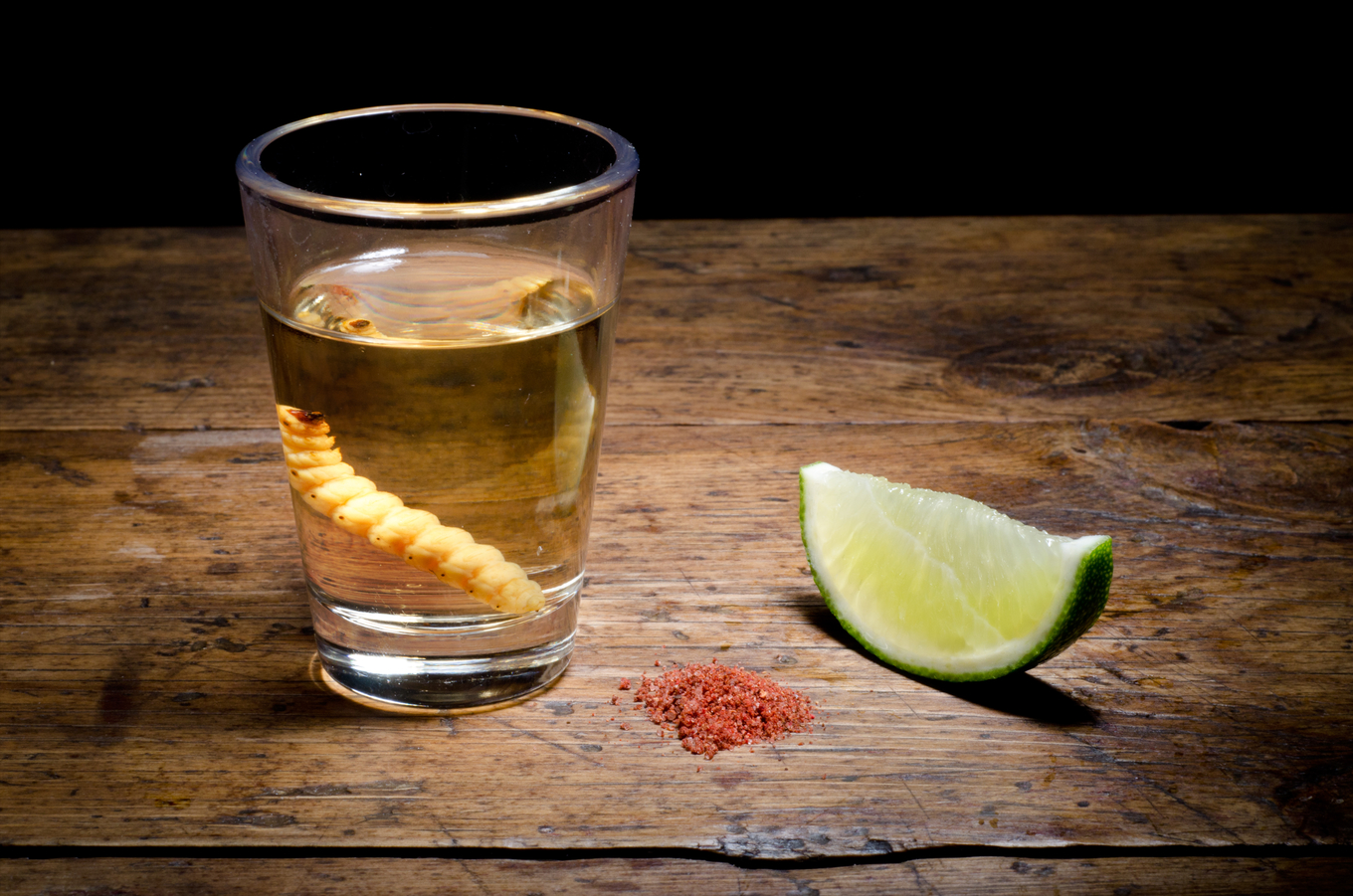 The Latin name for this larva is Chilocuil cossus redtembachi, known colloquially as the Chincuil. They are collected from June to September when the hot, humid, conditions lead the larva to emerge from the plant. Chincuil collecting is difficult because the larva must not be damaged in any way, otherwise, the mezcal would become cloudy.

For centuries the Chincuil has been eaten as part of the local cuisine for its outstanding flavour and its rich protein content (58.3% protein and 30.16% fats and oils). Traditionally it is fried and eaten with tomato and chilli sauces. The Chincuil is also reputed to have hallucinogenic properties, so its addition to mezcal to add extra flavour and 'something special' is perhaps hardly surprising.

There are two varieties of 'worm' used in mezcal, the most common a white worm called blanco and a red worm called rojo (the latter living in the roots of the Maguey). Whether the larva is placed in the bottle is red or white, any colour in the worm will be lost to the mezcal, leaving the 'worm' a light yellow after its pickling in alcohol.

You will sometimes find mezcal with a small cotton bag tied to its neck. Inside the bag is a powder made from crushed dried worms, salt and chile powder. A pinch of this powder should be sprinkled onto the surface of the mezcal before drinking.

Sadly, the inclusion of a worm in the bottle is now more usually a marketing gimmick to help sell inferior industrially produced mezcal.