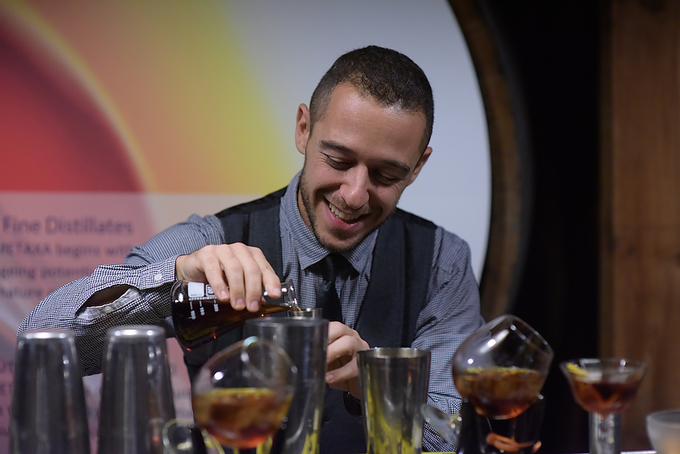 1974 was a bittersweet year for Greece, says Aris Chatziantoniou, the leading light of molecular mixology in Athens and co-owner of MoMix Bar. First came crisis, as Turkey, Greece’s historic rival, invaded the little island nation of Cyprus, sparking fears of war. Next came joy, as the military dictatorship that had ruled Greece crumbled and democracy returned to the country.

"After seven years of dictatorship and fear about the war, people had not been allowed to go out, not allowed to drink alcohol till late," Chatziantoniou says. "But once the Greeks knew we were going to have political parties and democracy, then bars started to open later and people started drinking again."

Holding Onto H, his anniversary cocktail, which he serves in a glass held in a mannequin's hand, captures not only the celebrations of that year but its bittersweet nature. "The whole experience of the drink is bitter, like the start of the year 1974, but you still have the sweet sensation because there are good things coming," Chatziantoniou explains. "You get all the sweetness and the cherry, and then you get the most bitter taste from the herbs and the botanicals."

The H in the name? That could stand for Hellas (Greek for 'Greece') - or Heering. Signature Greek elements run from the mastiha bubbles served on the side to the lemon balm and Greek sage infused in the vermouth; Heering's distinctive cherry notes figure in both the liquid and the bubbles.

The turbulent ebb and flow of Greece's recent history has shaped cocktail culture just as much as it has shaped family life or architecture. Born in Athens, Chatziantoniou started washing glasses in a bar aged 18, and has been bartending since the late 90s, mainly in Greece. For him, the financial crisis of 2007-2008, which sparked the debt crisis that has shaped Greek life for the last decade, also helped drive the creativity of Athens' famously inventive cocktail scene.

"2007, 2008 was the beginning of the economic crisis. People weren't going out a lot, so when they did go out, they wanted to have something different, not a vodka and coke, not a whisky and ginger ale, but something innovative," he says. "At the same time, with the crisis there were loads of journalists writing about what's going on in Greece. When you have journalists, they drink a lot, they go out a lot, and when they were seeing new drinks and innovative cocktails, one thing led to another."

When Chatziantoniou opened MoMix with his business partner Thodoris Koutsovoulos, it was 2012, close to the peak of the debt crisis. The Greek economy was shrinking at over 6% per year, with unemployment at over 20%. Opening any bar was a bold move. Opening a bar dedicated to the fine art of molecular mixology - time-consuming drinks that often require expensive kit and accessories - seemed crazy.

Not to Chatziantoniou, however. "First of all, I thought it was a really good idea: if you believe the idea is a good idea, you keep doing it," he says. "I believe that no matter what happens around you, if you're really sincere and really truthful about what you're doing, you're always going to have good results."

Chatziantoniou fell in love with the idea of molecular mixology in the mid-aughts. His friends were starting to progress in flair bartending (Cherry Heering was popular, he recalls, because the square, flat base was easy to work with), and he was looking for something different. "I did a couple of courses and I realised there were so many interesting things behind molecular gastronomy," he recalls. "I found that when we combine chemistry with alcohol and the consumer, then you can create amazing experiences for the people you're hosting."

Today, Chatziantoniou's drinks are sufficiently technical and his lab well-enough equipped for him to present at the University of Athens. But whether he's carbonating cocktails with dry ice or creating an alcoholic macaron with many layers of flavours and viscosity, it's the guest, not the science, that's at the heart of what he does.

"People think molecular mixology has to do with foams and jellies, but it has a whole lot to do with the psychology of the consumer - and the more information you have, the closer you can get to the consumer and give them what they want," he says. "When you're making a macaron, it's not just making a macaron that's alcohol based, but creating experiences, changing what people think when they bite into it." And whether what greets them is the bitter aromatics of Fernet Branca or the sweet viscosity of a cherry-filled mastiha bubble, it's always an experience to remember. 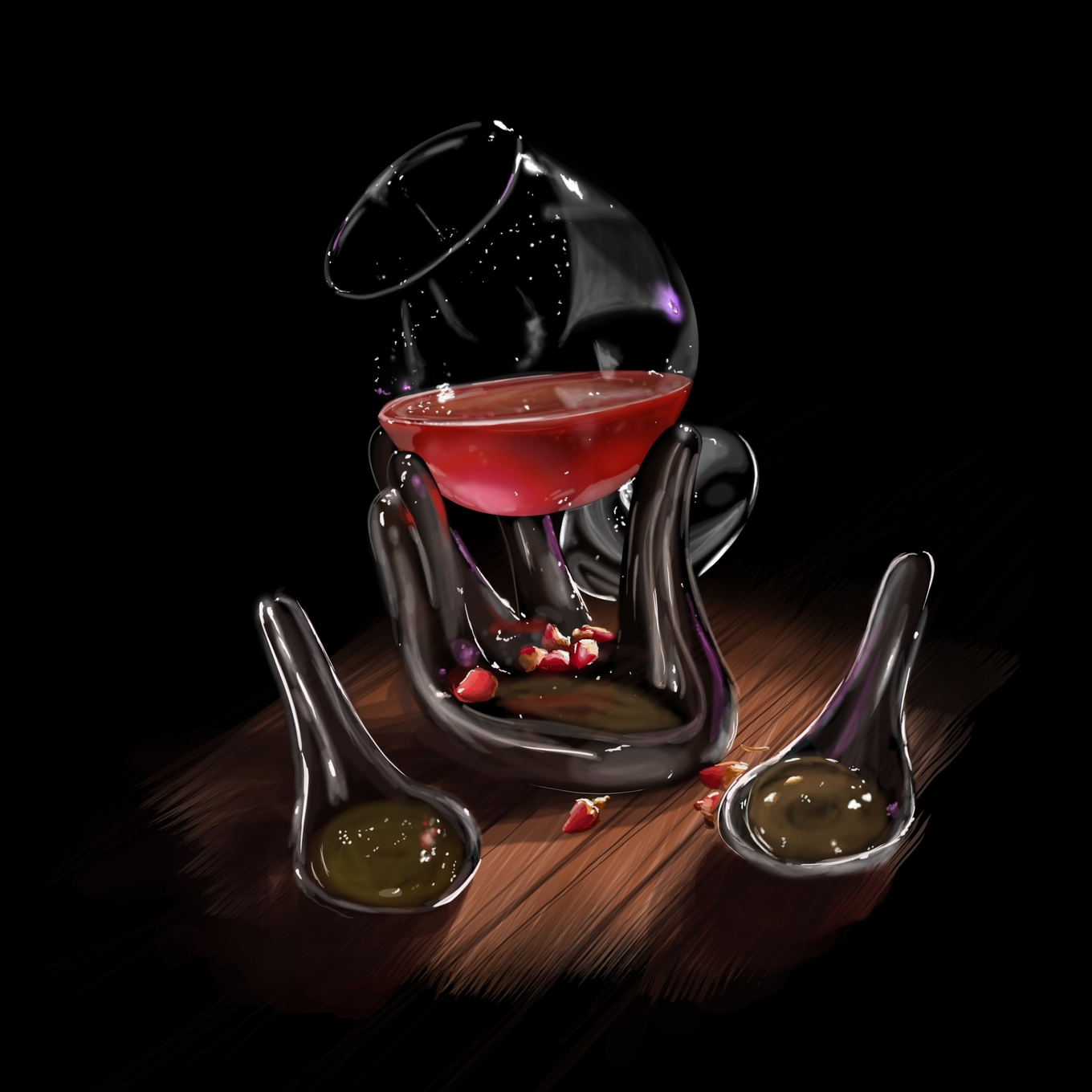 Glass: Balloon
Garnish: Served on a side with masticha bubbles (spherify the masticha using alginate and calcium lactate), injected with Cherry Heering and sprayed with grapefruit zest
Method: Stir with ice. 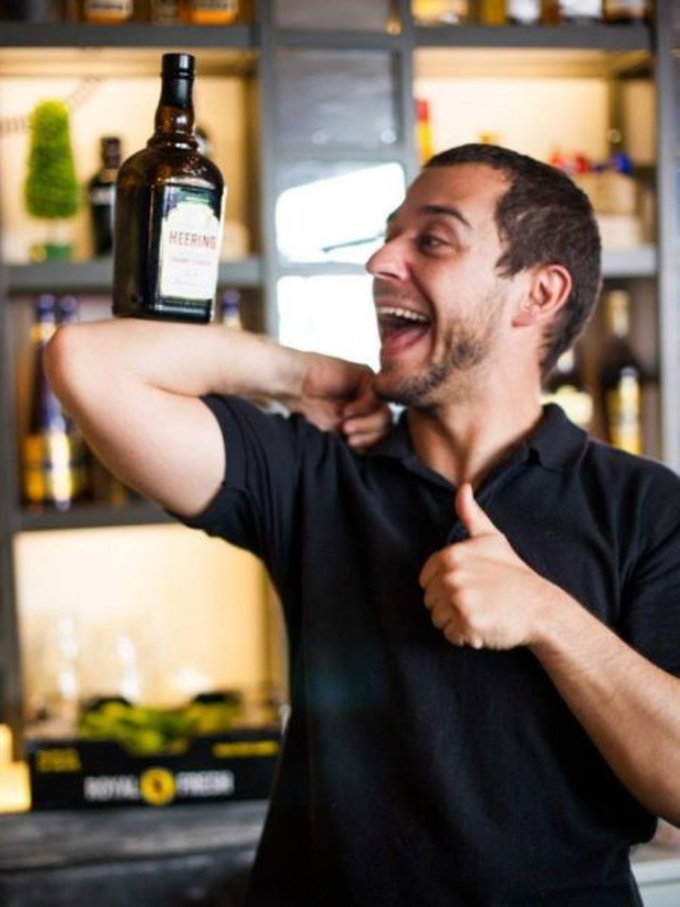